How to Demolish the North Korean Submarine Missile Threat 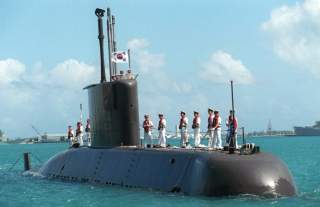 The recent reported test of North Korea’s KN-11, dubbed Pukgeukseong-1 (Polaris-1) submarine-launched ballistic missile (SLBM) has created quite a buzz. In fact, not long before the test took place, the South Korean defense ministry remarked that there were no signs that Pyongyang would launch missiles in the near future despite the visit by North Korean leader Kim Jong-Un to the country’s satellite command and control center, operated by the National Aerospace Development Administration.

Washington took the recent development seriously, accusing Pyongyang of contravening existing United Nations Security Council resolutions by staging the test. South Korean government authorities sought to downplay the test, pointing out that it was no more than an ejector test and the missile was assumed to have flown only 100 meters upon lift-off. This appears to correspond with the subsequent assessment reached by the U.S. intelligence community, that a compressed-gas ejection system test was conducted instead of a launch from a submarine.

The Indians, for instance, tested their SLBM from an underwater pontoon numerous times before being confident enough to begin preparations to test it from their latest nuclear submarine, INS Arihant. It is therefore, plausibly to say, simply a matter of time before Pyongyang finally tests the SLBM from a submarine. Notwithstanding the actual status of the SLBM, it is clear that North Korea is in the process of developing such a capability. Seoul has since called Pyongyang’s SLBM development, believed to still be in early stages, a “serious challenge.”

Indeed, the focus on North Korea’s ballistic missile activities has always been terrestrially-bounded—from the static Rodong missile silos to the newer, more survivable mobile launchers. As was recently pointed out on The National Interest, by conducting the SLBM test, Pyongyang has demonstrated that it is on the way to a second-strike capability. That the test took place at sea, and not on land as it has always been the case in the past, certainly took the world by surprise.

Scarce information has transpired from the SLBM test, besides the latest assessments. What we do know is that there were earlier reports of a shore-based ejector-launch test. There were also grainy satellite pictures of a hitherto unknown type of submarine measuring an estimated 65.5 meters, likely a diesel-electric powered ballistic missile submarine (SSB in short), which was later dubbed the Sinpo class. Previous rhetoric from Pyongyang offered hints into more ambitious endeavours for its missile buildup, including talk about building a “more elite” nuclear deterrent.

As enigmatically it may sound, by now it should be clear that what North Korea means by a “more elite” nuclear deterrent is one that includes a sea-based element. This sea-based deterrent certainly adds to the shroud of ambiguity that Pyongyang often thrives on to make its intent and moves appear uncertain, thereby compelling its perceived adversaries to react with caution.

Some commentators forecasted a chain series of events that will plausibly heighten tensions on the Korean Peninsula, for example driving Seoul to expedite missile defense plans (including the controversial proposal to install the Theater High-Altitude Air Defense system, a move which has been roundly opposed by China, North Korea and Russia), as well as incentivizing its option of pre-emptive strikes against Pyongyang’s nuclear and missile arsenals.

However, it had also been pointed out that the North Korean SLBM, if deployed effectively, may nullify the utility of pre-emptive strikes, because SLBM launchers are more difficult to target. This is true. Compared to its land and air-based counterparts, the sea-based deterrent is undeniably more secure. Ballistic missile submarines are traditionally known to be some of the quietest: hard to detect and destroy.

In particular, nuclear-powered ballistic missile submarines (SSBNs) can roam the world’s oceans by exploiting its infinite power and underwater endurance, thus presenting ASW difficulties. With SLBMs of intercontinental-range, the SSBN can easily strike deep into enemy homeland from an appreciable long standoff distance, beyond the adversary’s anti-submarine warfare (ASW) coverage.

It is therefore a race for time. Before the SSBN can reach its pre-designated launch point to lob its payload at the target, the adversary’s ASW forces have to swiftly locate and destroy the boat. Only nuclear-powered attack submarines (SSNs) backed by long-range aerial and surface ASW forces can possibly counter such a threat. However, not every navy has the luxury of such a highly-demanding set of forces at its disposal.

Based on existing information, we can surmise that North Korea does not operate any SSBN. All its existing submarines are conventionally-powered. The boat that reportedly conducted the recent test is with little doubt a SSB. Being diesel-electric powered, the SSB is not only handicapped by range but also by endurance. In fact, the Korean People’s Navy (KPN) is not known to have any air-independent propulsion to prolong the underwater endurance of its submarines.

Most importantly, the SSB cannot muster sufficient power using its diesel engines to outrun hunter-killer submarines. At the very most, this SSB can silently creep out of its hiding spot, reach its pre-designated position and stay quietly submerged by running on batteries. Because of its finite power capacity, this SSB will have to surface or snorkel for air to recharge its batteries. And a surfaced or snorkeling submarine is a sore thumb sticking out of the sea, an inviting ASW target.

As I had briefly discussed in a previous commentary, the most plausible scenario of the North Korean sea-based nuclear deterrent in action is one that will see the SSB securely sheltered in a submarine cave and quietly deployed in times of crisis. Because of its inherent technical characteristics, despite having stronger oceangoing capability compared to the KPN’s existing stable of coastal submarines, the SSB is unlikely expected to head too far out to the sea.

But the key militating factor is North Korea’s lack of aerial and surface cover to protect the submarine, at least up till the moment it discharges its lethal payload. The Korean People’s Army Air Force is handicapped in capacity. It has no air-to-air refueling tankers to boast of, and its most capable fighter jet is the MiG-29 Fulcrum, which has limited operational radius.

The KPN is far from being a bluewater navy. It lacks long-range power projection capabilities to protect the SSB against intervening ASW forces. Despite its reported construction of a pair of light frigates ostensibly configured as an offshore patrol vessel or ASW platform, the KPN’s existing fleet remains hamstrung in projecting force into distant waters. At the most, it remains a coastal defense-oriented navy.

What these all mean is that the North Korean SLBM threat can only be conceived of in two deployment modes. The first envisages a “suicide mission” that sees the SSB deploy as far out to the seas as its capabilities allow in times of crisis. For example, the vessel could reach the pre-designated launch point in the Sea of Japan, and survive long enough to fire its payload before it is tracked down and destroyed.

In view of the history of North Korean submarine incidents involving Pyongyang’s special operations forces, it is plausible to envision that the SSB may be deployed for such a mission. KPN submarine units are amongst Pyongyang’s elite military branches, and their crews are considered some of the most politically reliable. In this deployment mode, the SLBM may possibly target American bases in Japan. But it is unlikely that the SLBM can target the U.S. west coast because of potential limitations of the SLBM itself, to say nothing of those of the SSB.

The second possibility is for the SSB to deploy within the coastal confines of North Korea, well within its local air and surface cover. This approach exploits the geographical characteristics of the Korean coastline. There are numerous bays, inlets and outer isles, for instance, that may offer ideal “hiding spots” for the SSB. The target may encompass the American bases in Japan, but more plausibly the target will be South Korea itself.

This is a potential scenario that cannot be ignored when one considers that in March 2014, North Korea is believed to have tested its medium-range Rodong missiles at a higher-than-usual launch angle, according to South Korean military authorities. The Rodong has an estimated 1,000-1,500 kilometers range and intended for mainly targeting U.S. bases in Japan. A higher-than-usual launch angle essentially shortens the missile range and allows it to evade South Korean and American missile defenses and hit South Korea proper.

If this technique is mustered by the North Koreans, the KN11 SLBM or possibly subsequent “improved” derivatives may possess such a capability. This not only nullifies any prospective pre-emptive strike strategy adopted by Seoul, but it also potentially undermines South Korean and American missile defenses. Therefore, more suitable countermeasures against the North Korean SLBM possibly cannot rely on having a pre-emptive strike capability or using missile defense.

Of course, pre-emptive strikes and missile defense both add to overall countermeasures against the burgeoning North Korean ballistic missile capabilities. Still, what seems to be at least equally if not more essential is to possess good ASW capabilities. In particular, ASW capabilities will need to allow South Korea and the United States to track, target and destroy the SSB in real-time and at long-ranges.