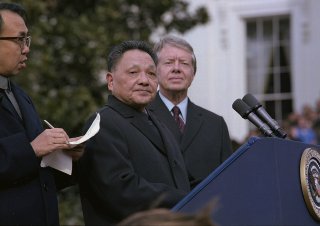 A SEA change in Western perception of China has occurred in the last ten years. It’s no longer just the quiet workhorse of the world economy. Instead, China is now recognized as the primary global competitor to the United States and its allies. As nato Secretary General Jens Stoltenberg recently observed, China is “coming closer in cyberspace, we see them in the Arctic, in Africa, we see them investing in our critical infrastructure.” Long gone are the days when “Made in China” was a common punchline.

Western elites know that they have been caught off-guard. Suddenly, they must understand China, but find themselves with more questions than answers—and answers are not so easy to come by. The Chinese Internet is not just obscured by a linguistic barrier, but intentionally firewalled. Only the most intrepid travelers can make it to China’s most sensitive regions like Xinjiang. The Chinese Communist Party (CCP) remains opaque as ever. China arguably understands the West better than the West understands China.

However, the contemporary world is not the only place where one can find answers. Chinese civilization remains one of the oldest civilizations we know of. Contemporary China may be intellectually inaccessible, but its history is not. To understand the present and future of a country or institution, we must first understand its past. In trying to understand how China’s history determines its present and future, we find ourselves in the same position as the man responsible for the country’s contemporary success: Deng Xiaoping.

Xi Jinping may be president today, but he inherited the institutional and ideological structures built by Deng Xiaoping during the latter’s leadership of China in the 1980s. Those structures laid the foundation for Beijing’s current position of power and were not accidental—rather, they were deeply informed by Chinese history and deliberately designed to both ensure the survival of the CCP and advance China’s geopolitical position in the world. There are two further important facts here. First, Deng was successful. Second, he was successful because he understood and solved a key constraint of political economy: how do you manage trade to grow your economy without surrendering the sovereignty of your country?

China’s historical experience with the political limits of trade did not begin in the twenty-first century. It did not begin during the Cold War or even with the arrival of the European colonial powers of the nineteenth century. During the Ming dynasty of the sixteenth century, China was already learning how to carefully manage trade to its benefit with a relatively forgotten Asian power: the Mongols.

ALTAN KHAN was a powerful Mongol ruler in the sixteenth century. Unlike the stereotype of the bloodthirsty steppe warlord, Altan was instead a capable statesman. For example, wishing to secure his legitimacy as leader of all the Mongols, he set up a meeting with the Third Dalai Lama, Sonam Gyatso, that re-established Mongol relations with Tibet after a two-hundred-year gap and led subsequently to the mass conversion of the Mongols to Tibetan Buddhism. The title “Dalai Lama” itself derives from Mongolian and was in fact first bestowed on Sonam Gyatso—and his successors—by Altan. Mongolia remains a stronghold of Tibetan Buddhism to this day.

The khan was also a great admirer of Chinese culture and society. He founded a new city not far from Beijing called Köke Khota and modeled it on Chinese civilization. He also aimed to improve Mongolian food security during the winter through trade with China and persuade the Chinese of his rulership of all the Mongols. Capable statesmen usually learn from the examples of successful societies, but this imitation doesn’t automatically win the friendship of the exemplar country, as Altan quickly learned.

The ruling Ming dynasty of China was disinclined towards Altan’s grand designs, and instead enforced a blockade. The Ming recognized that trade would drive population growth among the Mongols, and that if Mongol numbers were to sufficiently increase, China would become completely incapable of repelling their attacks. Though China would have benefited from trade with the Mongols, the Mongols would have benefited more, thereby threatening Chinese security. That the khan and his army reached Beijing in 1550 shows the balance of power was already precarious. In 1571, the khan invaded again, forcing a treaty and trade agreement that lasted about a year until the Chinese reneged.

Altan Khan died a decade afterward, having successfully consolidated his rule over the Mongols and persuaded the Chinese of it. But rather than presiding over an expanding Mongol empire that would overpower China, as had happened famously hundreds of years earlier, the Ming dynasty successfully forced Altan into a vassal relationship by restricting trade. He accepted the title of “Prince Who Conforms to Righteousness” from the Ming court in tribute. His descendants served China, fighting off yet further Mongol tribes from Köke Khota, renamed Guihua in the Chinese fashion.

Today, the same city is the capital of China’s Inner Mongolia Autonomous Region. A statue of a seated, open-handed Altan Khan looks down on one of the city’s main squares, a stark and perhaps telling contrast to the famous and enormous statue of Genghis Khan, armed and seated on a horse, that overlooks the steppe in neighboring Mongolia.

IN THE fall of 1860, the Forbidden City in Beijing—China’s imperial headquarters for centuries—was occupied by British and French troops. It was the end of the four-year-long Second Opium War that began over the illegal British export of opium to China. The British representative, Lord Elgin, proposed burning down the Forbidden City, but was persuaded instead merely to burn down the Summer Palaces of the Chinese emperors, as this would not jeopardize the signing of the imminent peace treaty.

That treaty stipulated a Chinese surrender, legalization of the opium trade, the establishment of religious freedom for Christians in China, the opening of the port of Tianjin—today known as China’s Manhattan—to foreign trade, the right of Britain to ship Chinese indentured servants to the Americas, the cessions of Hong Kong to Britain and of parts of Manchuria to Russia, and, just for good measure, a massive financial indemnity paid to Britain and France by China. With a decimated army and an occupied capital, the ruling Qing dynasty of China had little choice but to sign. Three centuries after the founding of Köke Khota, colonial European powers had succeeded where Altan Khan had failed.

Unlike the Mongols, the European colonial strategy began, rather than culminated, with the opening of trade. After establishing a measure of open trade, the European powers would follow up with military or political protection of economic interests and individuals in the country, eventually concluding with subservience or annexation.

This strategy worked for the European powers and not the Mongols because of one other key difference: while the landlocked Mongols depended on China for economic growth, the Europeans did not. Europe’s colonial powers had an entire globe with which to trade. When China blockaded the Mongols, the Mongols were forced to accept their vassal status despite military retaliation. When China embargoed European powers, they might not have retaliated immediately, but they did eventually, and with far more resources. Imperial China used an old strategy against a new player and lost the gambit. Though the Ming strategy failed, it may well have prevented China from being conquered outright like India was.

The British succeeded in conquering and ruling India, an Asian civilization of comparable size and age to China, using the same playbook. In India, the European presence began with merchant trading posts. Merchants from rival nations harassed each other, and in 1746, a French fleet occupied the city of Madras (now Chennai) and its British East India Company trading post. In response, the British sent more troops and became more active in local disputes. In 1757, Robert Clive, a former East India Company clerk who joined the military after escaping French captivity at Madras, led the British in the Battle of Plassey, where they deposed the ruler of Bengal and installed a puppet regime.

China had a similar history of European colonialism. The Portuguese were the first Europeans to gain a foothold, trading through the port of Macao in the sixteenth century. All other European trade was officially confined by the Chinese government to Canton—now Guangzhou—until conflict over the illegal British export of opium led to the Opium Wars, which ended in 1860 to China’s great disadvantage with the aforementioned treaty. Over the next fifty years, China suffered a litany of further losses to nearly every global power, from Japan to the United States, culminating in another occupation of Beijing in 1901 by an alliance of eight foreign powers at the finale of the Boxer War. Imperial China, as an entity, ceased to exist shortly thereafter—the last emperor was overthrown a decade later.

Try to imagine the mood of U.S. elites if the institution of the American presidency was abolished after Washington, DC was militarily occupied by invading armies from Russia, China, Mexico, and a few other foreign countries besides. To add insult to injury, Los Angeles is annexed to Russia to be their premier overseas trading post. Can one even fathom the phrase, “The Last American President?”