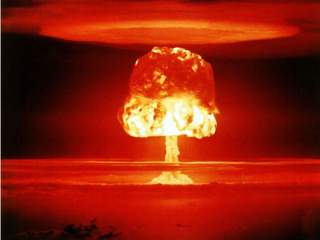 The United States and its regional partners are correct to oppose categorically a North Korean nuclear weapons capability, as well as all the testing and other activities that have become associated with it. This cornerstone of our collective policy should remain unchanged; to do otherwise would put the entire fabric of the Nuclear Non-Proliferation Treaty at risk and accede to a nuclear weapons capability in the hands of what may be the world’s single most brutal regime.

But we also need to recognize reality: North Korea continues to test nuclear weapons—no other country has done so this century. Even worse, as best we can tell, it continues to produce more fissile materials and thus quite likely more bombs. It remains demonstrably unfazed by Western sanctions and unafraid of Chinese retaliation. And the world’s tentative conclusion, that it failed to detonate a true hydrogen bomb in its recent test, is only likely to stoke its interest in trying again down the road. We can stick with an ethically justifiable and morally pure policy that is failing, or we can try something else.

Most observers have rightly called on China to tighten its economic aid and trade with the North. This is the correct diplomatic message to convey to Beijing. It is also likely to fail just as much as previous attempts. For all Beijing’s concern about having a nuclear-armed neighbor in northeast Asia, it is North Korea’s only ally, and vice versa. It is also afraid of Kim Jong-Un’s bellicosity and unlikely to wish to provoke him. So we should play out the current efforts to persuade Beijing to tighten sanctions in realms like banking and hydrocarbons, but keep expectations modest.

We need a policy that is both more pragmatic, in terms of its immediate goals for changing North Korea’s behavior, and more promising in its ability to gain greater Chinese cooperation for squeezing North Korea if there are further unacceptable actions taken in the future.

How to do this? We cannot reward North Korea for its outlandish actions, or “buy the same horse three times” to paraphrase those American officials who argued in the past that North Korea violated previous denuclearization deals and then returned to the negotiating table, only to demand additional compensation. But we can offer incentives for North Korea to take certain actions that it has not yet been asked to undertake, along with restraint on the nuclear front, as part of a package deal.

Our interim goal should be to dissuade Pyongyang from any more nuclear testing and to persuade it to dismantle verifiably its nuclear infrastructure—the reactor that produces plutonium and the centrifuges that produce enriched uranium. We know where the former is; apparently we still have no clue about the latter, so some form of managed access would be needed to identify and visit these sites (perhaps involving Chinese, Russian or UN monitors, if American eyes are unwelcome). Our longer-term goal should still be complete denuclearization, including the dismantling of the ten or so bombs North Korea is believed to possess—but that step could happen at the end of a long process that need not be formally undertaken or even fully negotiated at the outset.

The incentives we could offer in the short term would be a gradual relaxation of many existing sanctions on North Korea, in return not only for the near-term nuclear restraint noted above, but for an end to the production and testing of ballistic missiles above a certain range, and a pullback of some potent weaponry from near the DMZ. That would be the near-term package deal.

Over the longer term, the deal could aim for denuclearization and a fuller normalization of relations. If North Korea also agreed to steps to scale back its conventional forces substantially, and to gradually reform its economy (à la Vietnam), the international community could offer more humanitarian and development aid, along with full diplomatic ties. Complete denuclearization would be part and parcel of such an agreement. Of course, achieving or even negotiating such a plan is not realistic in the short term. But we can lay out the vision while working with the North on the shorter-term package of sanctions relief in exchange for verifiable nuclear restraint, stringent limits on ballistic missile testing and production and conventional force pullbacks.

To hawks, this kind of package may seem too kind to Pyongyang. But the standard hawkish alternative of advocating regime change has few prospects for success absent the kind of help that China is presently unwilling to provide. For doves, the above may seem wishful. And indeed, the odds are probably stacked against it. But presented as part of a package deal, it may do better than past attempts at a narrow denuclearization accord.

Our current North Korea policy isn’t working. Yet not all is lost. There is a meaningful difference between freezing North Korea’s nuclear capabilities where they are now, on the one hand, and seeing them continue to advance qualitatively and quantitatively on the other. Moreover, laying out such a vision for disarmament, even if unsuccessful, would be consistent with Chinese instincts and preferences on the issue. By promoting it, we would have established a predicate for asking Beijing for tougher measures next time North Korea misbehaves, should that again occur. Whether the policy achieves its preferred goal or not, it is likely to work better than the course we are now on.

Michael O'Hanlon is a senior fellow at the Brooking Institution and author of The Future of Land Warfare.