How Do You Define Terrorism? 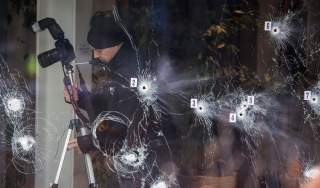 Terrorism remains a contested term, with no set definition for the concept or broad agreement among academic experts on its usage. Bruce Hoffman of Georgetown University has defined terrorism as “violence – or equally important, the threat of violence – used and directed in pursuit of, or in service of, a political aim”. Similarly, Louise Richardson of Oxford University believes terrorism is “deliberately and violently targeting civilians for political purposes.” Under these definitions, if there is no political aim, it is simply a crime and, if there is no violence, it is not terrorism.

The recent spate of extremist attacks in the United States and Europe have highlighted the difficulty of defining what constitutes “terrorism” and has led to two key questions. First, do these attacks and other forms of extremism constitute terrorist acts? Second, should the groups who incite hatred be held responsible for these attacks and labelled as terrorists even if they don’t directly participate in the violence?

An important distinction is that violent attacks often come from individuals who are inspired by, but not directly a part of, like-minded ideological groups. Therefore, aligning extremist hate groups with the definition of terrorism is more tenuous and difficult compared to the more obvious cases of ISIS, Al-Qaeda and others whose acts of violence are often directly coordinated, commanded and encouraged by their central leadership. In the case of ISIS, this was evident in its acquisition of territory in Iraq and Syria through violent means, its targeting of Shi’a Muslims, Yazidis and Christians in the process, and its direct command of fighters in Iraq and Syria.

However, recent violent acts from individuals are said to have been inspired by extremist hate groups. One such example is Darren Osborne, the Finsbury Park mosque attacker in London, who researched and downloaded material from Britain First, a fascist far-right political organisation. Furthermore, Osborne also had direct Twitter contact with one of Britain First’s leaders. He threatened to “kill all Muslims” and deliberately targeted the Finsbury Park Mosque, murdering one person and injuring 12 others in the attack.

That violent attack was reminiscent of similar acts of extremism from individuals inspired by extreme Islamist propaganda, notably the Westminster Bridge and London Bridge attacks in 2017. Mrs. Justice Cheem-Grubb, who was the judge during the trial of Osborne, labelled his deadly attack as an act of terrorism saying, “This was a terrorist attack. You intended to kill.”

The South Carolina shooter Dylann Roof, who murdered nine African-American church members during a Bible study in Charleston in 2015, was said to have been radicalised by a hate group. Roof was influenced by information he found via the Council of Conservative Citizens, a U.S.-based white supremacist group. However, Roof was convicted on charges of a federal hate crime rather than terrorism.

Some believe that Roof should have been recognised as a terrorist for his actions due to the similarity with the violence of Islamist-inspired attacks that were described as acts of terrorism. These include the 2015 San Bernandino terrorist attack where 14 people were killed and 22 others were seriously injured in a mass shooting. The perpetrators were labelled as "homegrown violent extremists" inspired by foreign terrorist groups, but were not directed by such groups and were not part of any terrorist cell or network.

However, it’s not just the extreme far-right groups that are challenging the definition of terrorism. In the United Kingdom, meat industry groups have held meetings with anti-terrorism police following a campaign of death threats against farmers from extreme vegan activists. These acts of harassment are reminiscent of the “eco-terrorism” groups from the U.S. in the 2000s. Those American environmental extremist groups were described by the Federal Bureau of Investigation as “terrorist threats” due to their politically-motivated acts of vandalism and harassment. In this regard, parallels can be drawn with extremist far-right groups who are involved in the racially-motivated harassment of individuals and far-left groups motivated by environmentalism.

That being said, if extremist groups continue to incite harassment and violence against specific groups or individuals for political ends then perhaps it’s time they fall under the contested term of terrorism.

Antonia Ward is an analyst in the Defence, Security and Infrastructure Research Group at RAND Europe. Her research interests include counterterrorism, countering violent extremism, intelligence and cybersecurity.

Image: Investigative personnel work at the scene of a cafe shooting in Oesterbro, in Copenhagen, February 15, 2015. Danish police shot and killed the man in Copenhagen on Sunday they believe was responsible for two deadly attacks at an event promoting freedom of speech and on a synagogue. REUTERS/Hannibal Hanschke (DENMARK - Tags: CRIME LAW TPX IMAGES OF THE DAY)