How Donald Trump Can Stage a Political Comeback 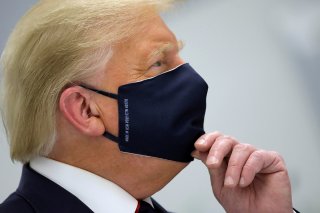 In the wee hours of Friday morning came the bombshell, courtesy of President Trump’s Twitter account: he and the first lady had tested positive for the coronavirus.

A real October surprise barely a day into the month. Close Trump adviser Hope Hicks had been displaying symptoms as early as Wednesday, the day after the first presidential debate and before the fundraiser that closed out the president’s public schedule for the foreseeable future, and reportedly had to be sequestered on Air Force One.

The news feels devastating to Trump’s reelection prospects. It virtually ensures that the coronavirus dominates the headlines, which might have otherwise shifted to Amy Coney Barrett’s Supreme Court confirmation hearings (which Democrats are already pushing to delay, now that Judiciary Committee Republican Senator Mike Lee has also tested positive), for the duration of the campaign. It amplifies the Democrats’ message that Trump has prematurely turned the page on the pandemic, or worse, while denying the president opportunities to contrast his vigor with Joe Biden’s.

Virus-shaming may be uncouth and unfair, but Democrats will engage in it relentlessly. They will point out to the relative absence of face coverings at Trump events and among his debate guests. Democrats will, as House Speaker Nancy Pelosi already has, also emphasize Trump’s bravado in the face of the coronavirus. Meanwhile, Pelosi is third in the line of presidential succession and will be the recipient of any letters that would trigger the 25th Amendment process for handling presidential incapacity.

Coming on the heels of a widely panned debate performance, Trump’s chances for turning around the polls are dwindling. The post-lockdown recovery is coming, but there is not much time for it to become noticeably robust before the election. The virus spread is clearly not fully contained and so Biden has led in the polls since February.

That’s even more durable of a lead than Hillary Clinton enjoyed for most of the race leading up to Trump’s upset win. In 2016, Trump and Clinton traded bad news cycles. Biden barely has any news cycles at all. The biggest change is the former vice president has been able to use the incumbent’s ubiquity against him, something every previous political opponent failed to do. The basement has so far beat the bully pulpit, despite Republican expectations to the contrary.

Yet in no small part because of the ghosts of the last election, one hesitates to ever fully count Trump out. Already liberals are behaving ghoulishly in the wake of his diagnosis. A wave of sympathy, even in our polarized political climate, is not impossible. Trump looked even more doomed following the release of the “Access Hollywood” tape during his campaign in October 2016. He recovered and went on to become president.

Even at 74, Trump could theoretically rebound from his bout with the coronavirus in just two weeks. It’s already the stuff of left-wing internet conspiracy theories that this whole thing is a ruse designed to produce exactly that outcome. Outside advisers like former New Jersey Governor Chris Christie could help him recalibrate the heat level for his next debate with Biden. The Great American Comeback could finally arrive.

None of this, other than perhaps Trump’s relatively speedy return to health, seems like the way to bet. Still, if we should have learned anything in the last four years, it is the limits of Beltway certainty. And as much as a late fall resurgence of the coronavirus pandemic would endanger Trump politically, it would also raise questions about the reliability of the pollsters’ assumptions about who will actually turn up to vote.

Trump’s “Access Hollywood” nadir was followed by the James Comey letter about Clinton’s homebrew email server. This type of good fortune is precisely what has eluded him this time around. He does not necessarily need bad news to befall Biden, but he needs some competing negative headlines about the Democratic ticket or much better ones about himself.

The news cycle surrounding the campaign, like Trump himself, needs to get better soon.