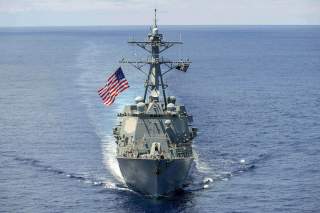 What should the Trump administration do about Beijing’s adventurism in the South China Sea?

China is asserting sovereignty over some 80 percent of this strategic waterway and reinforcing its claim by maintaining by far the largest military, coastguard and maritime militia presence in the region.

During the last five years, Beijing’s footprint in the South China Sea has been dramatically bolstered by the construction of facilities for surveillance, anti-air, anti-shipping and strike forces on a series of artificially dredged-up islands. Beijing’s expansionism has been involved a succession of modest incremental steps, each of which falls below the threshold that would trigger a forceful Western response. In consequence, China is now close to being able to declare and then enforce an Air Defense Identification Zone (ADIZ) over most, if not all, of the South China Sea.

This Chinese campaign of island creation and militarization poses a serious challenge to the operational freedom and power of the United States and its allies, to the immediate security of the maritime states of Southeast Asia and, more fundamentally, to the rules-based global order.

China’s largely unchecked international behavior enables Beijing to coerce other countries to take decisions that undermine their sovereignty. In effect, Beijing is pressuring regional countries to accept a deal that mirrors the contract struck with its own people: economic benefits in exchange for political compliance, with a big stick lurking in the background, threatening retaliation for aberrant behavior.

President Rodrigo Duterte of the Philippines appears tempted to bandwagon with Beijing. Cambodia, Laos, Thailand and even Malaysia are also developing closer relationships with China. Some regional governments now view China as not only their most important economic partner but also as a friend who, in contrast to the United States, doesn’t interfere with their sensitive domestic issues. Moreover, they appreciate that China has by far the largest military force in the South China Sea, and it is acting aggressively. The United States and its allies, on the other hand, have sporadic military presences in the region and are behaving very cautiously. Significant damage is being done to U.S. and allied credibility. In the absence of major changes in allied policy, much of Southeast Asia will likely shift into Beijing’s orbit.

When allied leaders have addressed China’s territorial and military expansion in the South China Sea, they have almost always responded by repeating a standard mantra: we have a strong interest in free sea and air passage, we have no national claims to territories in the area and we call on all parties to exercise restraint and resolve competing claims in accordance with international law. In token support of these interests, allied ships and aircraft have periodically transited the region, though they have rarely challenged China’s territorial claims directly. This approach has clearly failed to deter Beijing’s territorial expansion.

President Obama signalled frustration with Beijing during a September 4 interview with CNN:

But what we have said to the Chinese—and we've been firm consistently about this—is you have to recognize that with increasing power comes increasing responsibilities. . . .

When it comes to issues related to security, if you sign a treaty that calls for international arbitration around maritime issues the fact that you're bigger than the Philippines or Vietnam or other countries, in and of itself, is not a reason for you to go around and flex your muscles. You've got to abide by international law. . . .

So where we see them violating international rules and norms, as we have seen in some cases in the South China Sea or in some of their behavior when it comes to economic policy, we've been very firm. And we've indicated to them that there will be consequences.

It is not clear what, if any, consequences President Obama had in mind. In seeking to minimize the risk of confrontation at every step, the Western allies have effectively ceded control of a highly strategic region and have presided over an astrategic process of incremental capitulation. Bad precedents have been set and poor messages have been transmitted to the global community. In parts of the Western Pacific, the Western allies are in danger of losing their long-held status as the security partners of choice.

There are several explanations for how this situation has arisen: Washington and other allied capitals have accorded the South China Sea differing levels of strategic weight; the allies have been heavily distracted by crises in the Middle East and by the global campaign against terrorism; combating China’s clever incremental strategy has been unusually difficult; and coordinating allied responses in the Western Pacific is complicated by the hub-and-spoke alliance model. Moreover, the United States and its allies have, in fact, continued to pursue many modest security-cooperation programs with the South China Sea littoral states. But despite these endeavours and the U.S. rebalance to the Western Pacific there is a strong sense in the region that Washington and other allied capitals have so far failed to get themselves organized to step up to the plate and stare down Beijing.

Recovering the allied position in the Western Pacific will need to be addressed early in the Trump administration. What precisely are to be America’s core goals in the South China Sea? What is the “end state” that Washington wishes to reach in five or ten years’ time? And what strategy is to be employed to secure the desired outcome?

Continuing to operate in a reactive, incremental and largely astrategic manner carries serious risks. One of the biggest concerns is that Washington’s flat-footed behavior may embolden Beijing (and possibly Moscow, Tehran and Pyongyang) to launch further expansionist operations that the close allies will be unable to ignore. In the event of such a future crisis, the stakes are likely to be higher and the human, economic and military costs of allied intervention could be very substantial.

In order to deter such an eventuality, to pressure Beijing to acknowledge its breaches of international law, to start reducing its presence in the South China Sea and to adopt a more cautious approach in its international behavior, the Western allies need to formulate and apply a carefully crafted competitive strategy.

The most effective strategy will be innovative and asymmetric. Just because Beijing has focused its most assertive actions in the South China and East China Seas in recent years using various forms of military, coast guard, maritime militia and political warfare assets, it doesn’t mean that the allies should counter by focusing all of their efforts in those theaters and employing those same modes. To the contrary, the most effective allied options are likely to focus on applying several types of pressure against the Chinese leadership’s primary weaknesses in whatever theater that is appropriate.

Any successful allied strategy will need to progress beyond the so-called “pivot” and “rebalancing” to a more thoroughgoing military engagement with the region that might be called the Regional Security Partnership Program. The primary goals of this program should be to demonstrate continuing allied military superiority in the theater, deter further Chinese adventurism and reinforce the confidence of regional allies and partners in the reliability of their Western partners so that they feel able to staunchly resist any attempted Chinese coercion.

The most effective allied campaigns are likely to comprise a carefully calibrated mix of measures that can be sustained by the allies and their friends over an extended period. Candidate measures extend well beyond the standard diplomatic and military domains to include geostrategic, information, economic, financial, immigration, legal and counter-leadership measures. Some of these measures would comprise declaratory policies designed to deter Chinese actions, give confidence to allies and friends, and shape the broader operating environment. Other measures would be classified and designed, in part, to keep the Chinese off balance and encourage greater caution in Beijing.

Preparing such a campaign would, however, require focussed effort. Since the end of the Cold War, many of the mechanisms for multidisciplinary allied campaign planning, testing and implementation have been weakened or dismantled. This is particularly the case with advanced information operations and complex multidisciplinary operations requiring extensive involvement by elements of civilian societies. Effective allied campaigns encompassing not only diplomatic and military instruments but also information, geostrategic, economic, financial, immigration, legal and other measures will require the development of twenty-first-century planning and coordination mechanisms. This will be a major challenge for the United States and also for most of the allies. However, it will need to be done and done well if the United States alliance in the Western Pacific is to succeed.

The security of the Western Pacific will continue to be a primary interest of the United States and its close allies. Recovering the situation in this theater deserves to be an early priority of the Trump administration.

Ross Babbage is a nonresident senior fellow at the Center for Strategic and Budgetary Assessments. This article summarizes some of the points made in his recent report, Countering China’s Adventurism in the South China Sea: Strategy Options for the Trump Administration.