This Is How Donald Trump Can Win in the Balkans 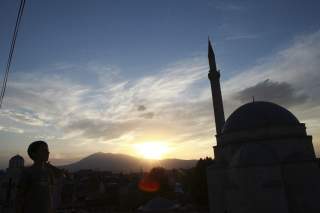 John Bolton, the president’s principal national security adviser, during a visit to Ukraine, said on August 24 that “the United States would not oppose a territorial exchange between Kosovo and Serbia to resolve their long-running dispute—provided Pristina and Belgrade work out a ‘mutually satisfactory settlement’ between themselves.”

Then came the news that Trump had discussed the issue of Kosovo in a phone call with German chancellor Angela Merkel.

For the first time in years, there’s a sense that one of the final remaining bilateral disputes in the western Balkans might be about to be solved.

Before going any further, it’s important to emphasize that the news is not all bad from region. Things have moved on since the 1990s, when U.S. forces intervened in both Bosnia and Kosovo to prevent the genocide perpetrated by the forces under command of Serbian dictator Slobodan Milosevic.

All the western Balkan countries are now at peace and deeply engaged in the process of European Union accession. Some, such as Montenegro and Albania, have already joined NATO.

Kosovo, in particular, has made enormous progress. After declaring independence in 2008, and being promptly recognized as a sovereign republic by the U.S. government under President George W Bush, it has gone far in its nation-building efforts.

All credible indicators of good governance and economic freedoms—from the World Bank to The Heritage Foundation and Freedom House—attest to the steady, though not always even, progress Kosovo has made to become a functional and democratic society.

Most members of the United Nations today recognize Kosovo as an independent country.

However, there are still many countries that don’t accept our statehood. The most important of these is Russia.

For ten years, Moscow has blocked Kosovo’s membership in the UN. That has harmed Kosovo’s efforts to complete its process of transformation and become a full-fledged member of the international community.

Russia’s opposition to our independence is based on Serbia’s continued refusal to accept that Kosovo is now a sovereign state.

However, there now seems to be a realization in Belgrade that things have to change. Serbia and Kosovo need to normalize their relationship.

Both countries are vying for European Union membership. It’s clear that voters in EU member states will no longer accept the importation of territorial disputes. European leaders have made it clear that Serbia and Kosovo must mend relations before they can hope to join the alliance.

To that end, the presidents of Kosovo and Serbia have begun a political dialogue facilitated by the EU foreign-policy chief Federica Mogherini. Recently, they have signaled a possible deal is in the making, which would include a mutually agreed border correction.

The possible deal would provide Serbia an excuse to finally recognize Kosovo. It would also unlock Kosovo’s accession to the United Nations as well as to other UN agencies. That would provide important support for development projects.

One can imagine that the initial inclination of Trump would be to stay away from the Balkans. However, Kosovo has the potential to be a major foreign-policy success while requiring a minimal investment of political capital.

First, Kosovo is staunchly pro-American. The United States is viewed favorably by 92 percent of our citizens, a percentage greater than that of any other country in the world. Kosovo’s capital, Pristina, is the only city in the world where a Bill Clinton Boulevard crosses a George W. Bush Avenue and a Senator Bob Dole Street.

American support for any deal would be a major reassurance for a staunch U.S. ally.

Second, the issue is no longer about expensive nation-building. It’s about ensuring the finality of peace and the ability of the United States to actually reduce its military presence in the tiny Balkan republic.

Third, Kosovo has overwhelming bipartisan support in the U.S. Congress. When a U.S. federal agency, the Millennium Challenge Corporation, signed a grant agreement last year with the government of Kosovo to support the energy sector and good governance, both the Republican and Democratic leaders of the House Foreign Relations Committee were present at the ceremony.

Compared with Syria, North Korea, Ukraine, the Middle East, Afghanistan and other hot spots in the world, closing the deal on Kosovo would be a far easier proposition.

Settling the border between two Balkans neighbors will be fundamental to securing international peace and stability in this corner of the world.

In contrast, leaving the issue in limbo by failing to settle the territorial arrangements may open the door for renewed ethnic tension and force greater U.S. political and military engagement, under far less peaceful circumstances.

Petrit Selimi is a former minister of foreign affairs of Kosovo. He tweets under @Petrit.

Image: A boy looks at the sky near an orthodox church and a mosque in Prizren, southwest from capital Pristina August 20, 2014. REUTERS/Hazir Reka