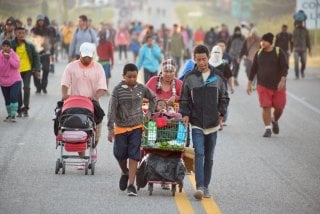 In late September, the Center for Immigration Studies (CIS), a Washington-based think tank, organized a week-long tour on the U.S. border with Mexico. I was the only European there, and the migration crises of the Old Continent gave me a unique perspective on the ongoing "significant challenge" (the Biden administration’s parlance for "crisis") at the Mexican border.

CIS took us to a “calmer” section of the border; we visited the westernmost edge of Texas, the city of El Paso, and some of the borderlands in New Mexico. The word “calmer” is a misnomer; with more than 17,000 migrants apprehended in September the El Paso sector of the border can only be called calm, because in the Rio Grande Valley sector U.S. Customs and Border Patrol (CBP) arrested 55,000 illegal immigrants during the same period.

In the smallish town of Mesilla, we met Rep. Yvette Herrell (R-NM-2), whose congressional district takes up 180 miles on the southern border. The most striking thing for me was Herrell’s assessment that the Biden administration discontinued key Trump-era immigration and asylum policies simply because they were introduced by the Republican president.

No, this is not going to be a slippery “should have” argument about the “beautiful” wall, because Trump’s signature project is as symbolic to the Democrats as it was for the previous administration. My point of contention is the immediate termination of the Migration Protection Protocols (MPP, also known as "Remain in Mexico") on Inauguration Day. The reason behind the decision to discontinue MPP (which obviously lacked any kind of impact assessment) was that the policy is considered to be inherently cruel and inhumane among Democrats. Well, the Nobel Peace Prize Laureate European Union has been laboring to hammer out a similar policy since 2017.

France’s then-freshly-inaugurated French president, Emmanuel Macron, proposed in July 2017 that camps should be set up in Libya where asylum seekers’ claims could be examined without their entering the continent. The same year, prominent EU leaders endorsed a plan that would entail setting up camps in the Sahel in Africa, where actual refugees could be separated from economic migrants. These camps would be run by the United Nations, but the bulk of the funding would come from the EU. The German delegation endorsed the plan with the condition that the camps need to offer adequate protection and provisions for their inhabitants. So, setting up camps that adhere to the unquestionably high human-rights standards of the EU is possible in Chad and Niger but camps in Mexico are inherently cruel and inhumane?

It's not just the EU, however, that has been eyeing a solution wherein asylum seekers have to wait abroad while their claims are processed. In the United Kingdom, the proposed Nationality and Borders Bill would introduce a similar scheme. The proposed British bill takes after the Australian system that involves ferrying asylum seekers to other nation-states while their claim is being processed. Inside the EU, the socialist Danish government recently proposed a comparable procedure. In my experience, these are not the countries that usually make the news with human rights violations.

After taking a look at Europe and beyond, the claim that MPP is inherently cruel and inhumane does not seem necessarily true. This, of course, does not automatically mean that MPP was flawlessly implemented during the Trump presidency. But the incoming Biden administration most certainly could have evaluated it and could have tried to fix it before completely scrapping it. It is definitely going to be interesting to see what the court-ordered reimplementation of the program will look like from mid-November onwards. I think that the Biden administration should consult more with European experts who have encountered similar policies—they will be less likely to “walk out” on an online meeting.

During the border tour, we visited an unfinished section of the wall in New Mexico. According to our guide, a local rancher, before the construction of Trump’s wall, there used to be vehicle barriers and barbed-wire fences installed on the border. Once work started on the Republican president’s signature project all previous installments were cleared away. With construction halted by the incoming Biden administration, long sections of the border remain now where the old barriers have been cleared away, but the new wall hasn’t been constructed.

Europe learned the hard way the importance of physical barriers on borders. With the vivid memory of the iron curtain and the Berlin Wall looming over the continent, any kind of migration policy that involved concertina wire was considered to be strictly verboten by most politicians. There were of course early exceptions: in 1993 a fence was constructed around the town of Ceuta—a Spanish exclave in Morocco—to stop waves of illegal African migrants. The real change in public opinion came in the aftermath of the 2015 Syrian refugee/migration crisis. When hundreds of thousands of people reached the southern border of Hungary (and the EU) during the summer of 2015, the conservative Hungarian government decided to build a fence on the Serbian border. Initially the decision was severely criticized by left-wing parties in Hungary as well as in the European Parliament. But when the severity and the magnitude of the crises finally set in, criticism faded.

In 2021, Belarus started using migrants as weapons in hybrid warfare to blackmail the EU, by flying them in from the Middle East and sub-Saharan Africa and then directing them towards the Lithuanian border. When the small Baltic country decided to erect a border fence to stop the waves of migrants, there was no controversy in Europe whatsoever. Furthermore, the EU rallied behind its besieged member right away: Frontex (the European Border and Coast Guard Agency) deployed 100 officers, thirty patrol cars, and two helicopters, while the European Commission allocated roughly $35 million for migration management with possibly more funds to follow.

The bottom line is: it took an unparalleled number of people to flock to the borders of the EU to change general public opinion about physical barriers on borders. If numbers are any indication: CBP apprehensions on the Southern border in FY2021 were the highest since the authorities started keeping records in 1960. It can be argued that for Democrats a border wall did not seem necessary in 2016 or in January 2021, but November 2021 is a different matter. I think that one would have a hard time finding a sitting government in Europe that wouldn’t come up with a concertina wire solution for a “significant challenge” like this one.

Kristóf György Veres is a researcher at the Migration Research Institute in Budapest, and an Andrássy Fellow at the Center for Immigration Studies in Washington, D.C.