How Excluding Israel’s Palestinian Citizens Has Led to Election Deadlock 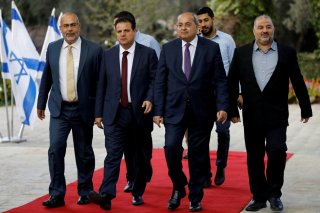 One of the major storylines in Israeli politics over the past two years, as its citizens have repeatedly and unsuccessfully gone to the polls to elect a new government, has been the growing relevance of the country’s Palestinian-Arab minority vote.

Israel’s political gridlock, in which no coalition of political parties has been able to form a stable government, can be attributed in part to the success the Arab citizens of Israel have had in winning parliamentary seats—15 of 120 in the previous election and the third-largest bloc—coupled with an unwillingness to include those parties in any governing coalition. The result has been a deficit in available seats across a fractured political landscape.

This increasing electoral power is producing new tensions in Israeli politics, where excluding Arab-majority parties from government leads to paralysis, but including them would fundamentally alter the way the state operates and sees itself.

In light of this impasse and the return of Israelis to the ballot box for a fourth time on Tuesday, it is worth exploring the complex relationship of Israel’s system of democracy to the Palestinian people as a whole. This includes not just those who are part of the Israeli polity, but also the millions of Palestinian non-citizens living under Israeli rule.

For the majority of Palestinians, who are not citizens of Israel, there has long been the hope—dwindling as it may be—that Israelis will vote into power a government that will end its military occupation and be amenable to peace along terms that Palestinians can accept. This sentiment has strained over the past several years as the military occupation of Palestinian land has entrenched and the scope of mainstream public opinion in Israel has narrowed, with an overwhelming majority now rejecting those terms.

At the same time, Palestinians are keenly aware that they are a colonized people, disenfranchised natives without the right to participate in an electoral system and government that rules over every aspect of their lives. They are both denied self-determination in a sovereign state of their own and the right to elect representation in the government of their sovereign.

Palestinian non-citizens can occupy both this outsider and insider relationship to the Israeli polity because, for the most part, they have not wanted to be citizens of Israel. This fact is the difference between life under occupation and life under apartheid, and it may be changing as the possibility of establishing a Palestinian becomes ever more remote.

Lastly, for the Palestinian citizens of Israel who actually are enfranchised voters—roughly 20 percent of Israel’s population—there is a growing cognizance of their structural impediment to influencing policy and decisionmaking as a minority in Israel’s ethnic majoritarian system. Indeed, as this community has become more politically assertive over time, demanding further inclusion and equality with each passing generation, their continued exclusion on the grounds of not being Jewish has become more pronounced and alienating.

Taken together, these three facets encompass the Palestinian experience with regard to Israeli democracy. And Israel’s upcoming round of voting is no different. While Palestinians place little confidence in the promise of change that is otherwise explicit in democratic elections, they can’t help but pay close attention to the outcome because of the undeniable significance it has on their daily lives and future freedom. Indeed, it is no exaggeration to say that the results of Tuesday’s vote will have more of an impact on their daily lives than the Palestinian Authority’s parliamentary elections scheduled for May 22.

Without a sovereign state, Palestinians in the occupied territories remain subjects of the Israeli government and its military regime, without influence over the decisions that shape their lives and no accountability over the decisionmakers. This has been the case for more than fifty years.

During this same period, Israel has populated the occupied territories with hundreds of thousands of its own nationals, putting into sharp relief the disparity between citizens and non-citizens.

For Palestinian citizens of Israel, this period has been marked by a different struggle, although one still bound to the overarching conflict between Israelis and Palestinians. The pursuit of equality among Arab citizens in Israel is often explained in generational terms, with later generations less defined by the trauma of the Palestinian Nakba—the destruction of Palestinian society in 1948—and the immediate period of Israeli military rule, and more concerned with the state of Israeli democracy and their status within it—defined as the “Stand-Tall Generation.”

In the late 1980s and 1990s, this struggle began to be framed as one to transform Israel into “a state of all its citizens,” a slogan popularized by the political philosopher-turned-politician Azmi Bishara. This straightforward goal, which was eventually adopted by all Arab political parties in Israel, may sound innocuous to the Liberal ear, but it is unbearable to the Zionist one. Based on the notion of equality and civic nationalism, as opposed to entitlement and ethnic nationalism, it does not allow Israel to passively define itself as Jewish and democratic, but rather forces the choice between being Jewish or democratic.

Today, this remains one of the central underlying tensions in Israeli society and politics. While Israel’s liberal establishment has largely been paralyzed by this question, its rightwing has been emphatic and has largely defined the majority’s response, which is to be Jewish first. The crowning achievement so far of this effort was the passage of the so-called Nation-State Law in 2018, which asserts that Jews have the exclusive right to self-determination in the Land of Israel—a territory without fixed borders that could even include the West Bank and Gaza Strip. Most notably, the law made no mention of equality, democracy, or Israel’s non-Jewish citizens. Thus, the defining character of the state is simply its Jewishness. In fact, after the passage of the law, Prime Minister Benjamin Netanyahu wrote on social media that “Israel is not a state of its citizens,” a rebuke aimed directly at the country’s Arabs, and an incredible declaration altogether from a head of state when read at face value.

A Palestinian Arab, therefore, may hold some democratic rights, but is for all intents and purposes excluded from the polity’s determinative self.

This is not just conceptual. Take the unprecedented political quandary Israel now finds itself in, unable to form a government after three consecutive election attempts. If either of the two major Israeli parties in the previous elections were to include the bloc of majority-Arab political parties known collectively as the Joint List in a coalition, they would have crossed the 61-seat threshold needed to form a government long ago.

Yet it’s basically a foregone conclusion that they will not be included in a governing coalition. Not only has no Arab party ever been included since the founding of the state, but the leading candidates all dismissed the notion that they would incorporate the Joint List in their government. After a previous round of voting, Aymen Odeh, the head of the Joint List, said that he would join such a coalition and endorsed Blue and White to lead the government in order to defeat Netanyahu, their mutual adversary. Odeh was ignored by Benny Gantz and the party leadership.

Some have argued that it is not their non-Jewishness that disqualifies Arabs from inclusion, but rather their opposition to Zionism, the founding ideology of the state. Perhaps this is true. But it should then be recognized that they are anti-Zionist because Zionism—or Jewish nationalism—excludes them a priori and has been realized at the expense of the Palestinian people. Who can be for an ideology that denies them the right to full, equal citizenship, self-determination, and freedom?

Thus, without political power and influence, the voting rights become somewhat hollow. As a result, disillusionment with Israeli democracy among Arab citizens has spread and turnout in national elections was on the decline for years. That was until 2015, when in response to a scheme to keep them out of the Knesset by raising the electoral threshold needed to enter the parliament, the four largest Arab parties united to form the Joint List. Not only did this allow the parties to cross the new threshold, but the response from the Arab electorate to political unification was overwhelmingly positive and led to the largest ever collective seat totals for the Arab parties—13 in 2015 and 15 in 2020.

It is clear that the Arab public in Israel is searching for a way to challenge its historic marginalization. Recognizing this, Odeh has begun articulating the Joint List as the new leader of the Israeli left and attempting to posit the political bloc into mainstream Israeli politics for the first time. That is easier said than done, but with 13 to 15 seats in the Knesset, the Joint List is difficult to ignore—a reality that is empowering for an ethnic minority that has been alienated throughout much of its seventy-year existence.

Moreover, a lack of direct influence over policy doesn’t mean Arab participation in national politics in Israel is meaningless. On the contrary. Today, Palestinian politicians in Israel are the only democratically-elected Palestinian politicians there are—although Palestinians in the occupied territories may finally have a chance to participate in elections after a fifteen-year gap this May. This gives them real credibility at a time when Palestinian politics in the occupied territories is facing an acute crisis of legitimacy. Perhaps, more importantly, at this moment in which Palestinian self-determination will likely not be realized in an independent state, the shift from a territory-based struggle to a rights-based struggle is all the more likely. That makes access to the ruling democratic platform all the more useful.