How to Fight Terrorism in the Donald Trump Era 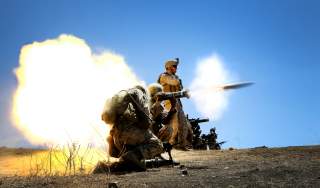 ADDRESSING THE threat of terrorism, both real and perceived, will be a top priority for the Trump administration. Despite the dearth of Islamic State–directed attacks on U.S. soil, polls from earlier in 2016 showed that 73 percent of Americans saw the Islamic State as a “very serious” threat to the United States, and another 17 percent saw it as “moderately serious”—a rare priority that crosses political lines. Almost 80 percent believed the Islamic State has assets in the United States and the capacity to “launch a major terrorist attack against the U.S. at any time.”

Not surprisingly, terrorism is a political football. During the presidential campaign, Donald Trump regularly warned about “a major threat from radical Islamic terrorism,” and tweeted, “We better get very smart, and very tough, FAST, before it is too late!” Obama, he claimed, has boxed U.S. generals in with a “strategy that is destined to fail.”

Fighting terrorism has been at the top of the U.S. national-security agenda since 9/11, but the terrorism threat, and thus the appropriate means of counterterrorism, is often grossly misunderstood. The danger has evolved, and counterterrorism must change to keep pace. Today, the greatest challenges abroad require the United States to reorient its counterterrorism focus. Simply arresting and killing bad guys is at best treading water; instead, the United States must become more involved in working to stop or at least contain the civil wars that fuel radical movements. Ultimately, the most effective counterterrorism effort could be fostering better governance in troubled parts of the Middle East. At home, the challenges are even more complex: the election exposed failures of societal resilience and led to the public demonization of Muslims, both of which only further empower terrorist groups.

Terrorist groups pose a far greater danger to U.S. interests in the Middle East than they do at home. The fact is that terrorism has changed over the years. With these changes in mind, I offer recommendations for the new administration both in its counterterrorism approach overseas and, more challenging, in its policies at home.

IT IS difficult to assess the danger of terrorism today because it varies so much by region. In the United States, the terrorism threat has been low since 9/11. Only ninety-four Americans have died from jihadist attacks—that’s ninety-four too many, but that’s far fewer than experts (including myself) anticipated in the weeks after 9/11. Indeed, if you exclude Omar Mateen’s 2016 attack on the Pulse nightclub in Orlando, which killed forty-nine people (over half the total homeland deaths from jihadists in the post-9/11 period), right-wing terrorists have killed more Americans since 2001. But we don’t hear much about that.

Part of why we don’t is that 9/11 was such a dominant event, and reporting of terrorist plots has skyrocketed since, particularly if the perpetrators have even weak links to jihadist groups like Al Qaeda or the Islamic State. A more globalized media has meant that Islamic State attacks in Dhaka or Al Qaeda attacks in Bali receive considerable press attention, to say nothing of more familiar foreign ground such as Paris or London. Although the terrorism problem in Europe is more severe than that facing the U.S. homeland, it may not exceed the level of past decades. The 1970s and 1980s saw far more attacks than there were in the post-9/11 era. Recent years have seen horrendous attacks, like the 2015 shootings and bombings in Paris that killed 130 people—but 1988 saw 440 people die, most of whom perished when Libyan agents bombed Pan Am 103.

The perception of danger is far greater than the reality. Even after fifteen years of intense counterterrorism efforts, 40 percent of Americans believe the ability of terrorists to launch a major attack on the United States is greater than it was at the time of the 9/11 attacks and another 31 percent believe it is merely the same.

While the American public has an exaggerated sense of the terrorism threat, there has been a surge in violence—it’s just not in the West. It is in South Asia, the Middle East and Africa where the threat has intensified. Specific numbers are difficult to track because so many of the region’s terrorist groups are also engaged in civil wars in which hundreds of thousands have died. Much of the violence is technically not terrorism—but the confusion between terrorism and civil war illustrates the broader danger these groups pose to the region. Terrorist-linked war is not new to the Middle East, of course. Lebanon suffered a calamitous war in the 1970s and 1980s where Palestinian terrorists and Hezbollah were important players. Jihadists in Algeria fought a vicious civil war against the regime in the 1990s, where over one hundred thousand people died. Afghanistan, Nigeria, Sudan and other countries in the region have long endured civil wars. Yet even with this bloody benchmark in mind, the numbers in recent years are far grimmer. Terrorists have contributed to and exploited civil wars that have killed more than one hundred thousand in Afghanistan, tens of thousands in Pakistan, tens of thousands in Nigeria, thousands in Yemen, thousands in Libya and hundreds of thousands in Syria.

With this picture in mind, the challenges facing the United States can be broken down into three issues. The first, of course, is the real risk to American lives and those of U.S. allies. In absolute terms, these are small in the United States and only slightly larger in Europe. The average American is more likely to be shot by an armed toddler than killed by a terrorist.

The next danger is political. Trump scored many points playing up the threat of Muslim immigrants and Syrian refugees, with the terrorism danger—statistically low though it is—looming in the background. Defending America means more than defending American lives; it also means defending American values, including being a home to peaceful people of all religions and welcoming refugees. In Europe, the politics are even nastier as xenophobic movements gain notable strength. In Europe, countries as diverse as the United Kingdom, France, Germany, Norway, Austria, Hungary and Greece have seen a surge of anti-Muslim, anti-immigrant, right-wing nationalism.

The biggest danger, however, is to U.S. interests in Muslim parts of Asia, Africa and the Middle East. Stability and governance have collapsed in many countries and are under threat in others. In addition to the human cost, this threatens the stability of U.S. partners and has led to dangerous confrontations, with countries like Saudi Arabia intervening in Yemen and otherwise ratcheting up regional tension in competition with Iran. The danger also allows U.S. allies like Egypt to resist the pressure to democratize, claiming that all forms of religious opposition are linked to terrorism.

NUMBERS GIVE us a rough sense of the scale of the danger, but simple comparisons of present and past eras neglect how terrorist groups themselves have changed. Some of these dangers concern the groups themselves and their ideology, while others are about how they recruit, act and thrive.

The primary groups opposing the United States have grown ever more radical. In the 1960s and 1970s, the United States faced an array of national-liberation and left-wing movements, including some, such as the Viet Cong, that blended the two together. Although such groups were often ruthless and vicious, their ultimate goal—self-determination—was comprehensible and even admirable to many Americans. Left-wing groups often represented more fringe voices, but they too had an ideology comprehensible to most Americans, and their actual use of violence was quite limited. In the 1980s, Hezbollah killed hundreds of Americans, but focused its violence on American troops and diplomats overseas—not civilians at home. Its state sponsors, namely Iran, made the group more formidable, but also placed limits on the scope and scale of its attacks. Iran recognized that if it crossed too many lines it might lead to a devastating U.S. reaction. Brian Jenkins, one of the pioneers in the study of terrorism, noted in 1988, “Thus far, terrorists seem to be more interested in having a lot of people watching, not a lot of people dead.”

This paradigm collapsed on 9/11, and the Islamic State has taken it at least one step further. Al Qaeda proved willing to kill thousands of civilians in order to drive home its message to the United States. Ever since, even though the group’s bloodiest attacks were more akin to the worst of the 1970s and 1980s, the assumption is that terrorists are bent on mass killing. Al Qaeda’s demands went beyond simple self-determination or a change in the political system for one country, and instead required the United States to withdraw completely from the Middle East. The Islamic State’s actions confirmed this trend. It embraces sexual slavery, beheadings, and mass executions of Muslim minorities and Sunnis it considers disloyal. So too are the Islamic State’s goals more radical: it seeks to create a caliphate, win a sectarian war in the region and bring about the apocalypse. Even Al Qaeda considers the Islamic State too extreme. The former top American Al Qaeda spokesman, the late Adam Gadahn, warned of “severe punishment” awaiting Islamic State fighters, both “in this world and the next,” for “the crimes [they have] committed against Muslims.” When a group responsible for killing thousands of innocent civilians criticizes another for being too violent, clearly the ante has been raised.