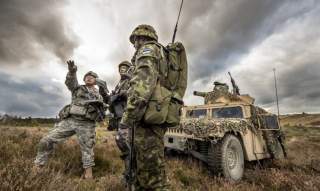 This week’s NATO Summit in Warsaw, held in the shadow of the United Kingdom’s sobering “Brexit” vote to exit the European Union, the highly charged American presidential campaign, and continuing Russian provocations in Ukraine and the Baltic, highlights both the importance of NATO as the vehicle for transatlantic collective security and the chronic disconnect between missions and resources facing the alliance.

As NATO confronts a range of dynamic threats from the east and south, as well as those that defy borders, the need for a cohesive transatlantic coalition to address these complex and difficult challenges is greater than at any time since the end of the Cold War. In the aftermath of Brexit, NATO members, including the UK, likely will seek to show their solidarity by shaping a strong collective approach on these matters.

However, the resources and capabilities that NATO’s European member states can bring to these tasks remain anemic, and the resulting inequality of burden sharing with the United States poses challenges—beyond the current U.S. election—for the long-term sustainability of an alliance.

Nevertheless, it is unlikely that anything new will be done this week to meaningfully address the mismatch between ends and means. The Warsaw Summit necessarily will be focused on the cohesion of the alliance and Europe itself, in light of the Brexit vote and important operational matters, such as shoring up its eastern front through enhanced troop deployments and rotations.

Thus, on issues of budgets and capabilities, this twenty-seventh NATO Summit will likely resemble the iconic movie Groundhog Day, where the same events are repeated again and again. President Obama, like other American leaders before him, will probably admonish European allies to spend more and better money on defense, and the summit communiqué will probably reaffirm the recent allied commitment to spend at least 2 percent of GDP on defense, and note that in 2016 they have increased their cumulative spending for the first time in years.

While any spending increase is constructive, European NATO funding and capability gaps remain problematic and threaten to worsen in years ahead.

The challenge is how to meaningfully and realistically address this entrenched problem—not just on paper at summits, but on a sustained and measurable basis between summits—in the context of a Europe with limited appetite for defense spending, fueled by powerful long-term secular trends. Rather than continuing the thankless Sisyphean task of rolling stones uphill, the alliance needs solutions that are consistent with evolving European culture.

1. The Sustained Need for and U.S. Commitment to a NATO Evolving to Meet New and Complex Challenges

Contrary to Donald Trump's assertion that NATO is obsolete, NATO is our most important security alliance—not only historically, but for the future as well.

The historical record is clear. NATO has been an enduring alliance—perhaps the most successful in history—that has adapted flexibly to provide for the collective defense of its members in the face of ever changing threats. Sixty-seven years after its founding, NATO has successfully helped to keep the peace and foster integration in Europe, sustained the strong transatlantic security relationship, and offered the type of security reassurance that has allowed our European allies to prosper and focus together with us on a range of common challenges.

Significantly, our European NATO allies answered the call after 9/11 and invoked their commitment to collective defense under Article 5 of the North Atlantic Treaty to support the U.S. effort in Afghanistan—a strong sign of the ties that bind us. Other examples abound of NATO Europe’s participation in combined operations for our common security.

The current security and political environment puts more, not less, of a premium on working effectively in a coalition. The alliance must adapt to address a revanchist Russia to NATO’s east, the rise of ISIS, the Syrian Civil War and the resulting migration crisis to NATO's south, as well as security challenges unbounded by geography, including terrorism and cybersecurity. And, as history teaches, our NATO allies are the ones that have time and again come to the table and the battlefield with us and who can be expected to do so again in the future.

The Possible Effects of Brexit at Warsaw. Particularly in light of the Brexit vote, we should expect a strong show of Allied cohesion at Warsaw in support of new measures against the full range of threats we face. The UK government, a leading contributor to European defense, immediately reaffirmed its full commitment to the NATO alliance in the aftermath of the Brexit vote. The UK also is boosting its military defense of NATO Baltic allies, and from 2017 will lead NATO’s new “spearhead” rapid reaction force.

The implications of Brexit for the EU’s Common Foreign and Security Policy are more uncertain; various options are possible, and the UK may choose to remain engaged in some fashion.

Regardless, the UK and its European partners undoubtedly want to make it clear that allied unity within NATO will continue. In effect, NATO will again become the central unifying and integrating entity within Europe and help to overcome centrifugal tendencies that are bound to be strengthened in the aftermath of Brexit. Every effort should be made at Warsaw to cement the UK’s role for the future.

The Risks of U.S. Disengagement. Finally, consider the unhappy alternative of a future security environment with little or no U.S. engagement in NATO. Such a scenario, and the removal of U.S. assurances, would increase European insecurities and possibly cause some NATO members to retreat to a more neutral posture or realign themselves to the East. Especially in the aftermath of the Brexit vote, a rollback of U.S. engagement would likely reinforce centrifugal tendencies toward disunity—to the detriment of the United States and Europe.

Indeed, to seriously consider a future without a strong U.S. engagement in NATO would ignore the history of balkanization and conflict in Europe over hundreds of years, and raise the specter of increased tensions and security risks that have drawn the United States multiple times into war, and that NATO was designed to avoid. Is it really in U.S. interests to shake the bonds that have brought peace and prosperity for nearly seventy years?

While there are many contentious issues in national security policy across the political spectrum in the United States today, our participation in NATO has not been and should not be one of them. There is be no place in any serious national discourse for a view that the United States should walk away or substantially diminish its participation in NATO, or somehow use its willingness to participate in NATO as a bargaining chip in some fashion in order to get a “better deal.”

The bottom line is that sustained commitment to the NATO alliance should come before the “art of the deal.”

Even with the expected show of European and transatlantic unity at Warsaw, the challenge is the large and growing gap between the commitments European NATO members have made and the resources—budgets and capabilities—available to perform them.

Contrary to what might have been expected, European defense budgets did not increase significantly after 9/11, and continued to decline throughout that decade, a process accelerated by the financial crisis and subsequent recession of 2008. This map shows European defense expenditures as a percentage of GDP in 2015.

Sustained reductions in defense investment have created significant capability gaps, including declining readiness, deactivation of active duty forces (particularly ground combat units), reduced deployability and sustainability, drawdown of stockpiles of munitions and spare parts, delayed or postponed procurement of major defense items, and a general absence of plans to reconstitute forces should the strategic outlook change. The extent of U.S. engagement needed during NATO’s operations in Libya only reinforces the very real limitations of our European allies.

This burden-sharing problem is not new. For more than two decades, NATO has launched a series of efforts to encourage its members to maintain sufficient levels of ready forces and defense investment. Unfortunately, all of them have largely fallen short. From the Defense Capability Initiative in the late 1990s to the Prague Capability Commitment, one measure after another has simply not moved the needle.

In an effort to reverse the trend, NATO leaders agreed at the 2014 Wales Summit to spend 2 percent of GDP on defense (itself a step back from the seldom-reached 3 percent commitment of the 1980s). Those few nations that were spending 2 percent or more of GDP agreed to maintain that spending level, while those spending less than 2 percent agreed to halt any further declines and to reach the 2 percent guideline within a decade. Nations also pledged within a decade to spend at least 20 percent of their annual defense budgets on major new equipment, including related research and development.

The pledge has had some limited but salutary effects. By the Warsaw Summit, twenty-one of NATO’s twenty-eight members will have honored the first element of the pledge—namely, to halt the reduction in their defense spending. Sixteen allies have increased their defense spending since the Wales Summit, with eastern Europe taking the lead.