How to Fix the Syrian Mess 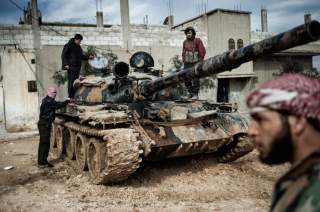 The bloody conflict in Syria since early 2011—whether we call it a civil war or by any other name—has brought in its wake actual disaster with vast destruction of the country and its infrastructure and over 200,000 dead, 6.7 million internally displaced, 3.8 million refugees and 13 million people in need of urgent humanitarian assistance.

Staffan de Mistura, the third in a series of United Nations envoys tasked to find a solution for the Syrian conflict, has introduced an “action plan” aimed to make 2015 the year in which movement toward a political settlement of the conflict takes place.

“One is the need to focus on the real threat of terrorism as defined by the resolutions of the Security Council. Second is to reduce violence...three, through the reduction of violence, try to reach as many people as possible in Syria and outside Syria who have been suffering due to this ongoing conflict; and through that, hopefully facilitate it and use that as a building block in the direction of a political solution,” the Special Envoy pointed out.

After meeting the Syrian president, the UN special envoy confirmed that he has received a commitment from the Syrian government to suspend airstrikes and artillery shelling on the city of Aleppo for six weeks to allow the UN plan to succeed. However, realism and pragmatism is essential in order to resolve Syrian crisis, and some relevant actors have to swallow their pride and correct their past mistakes.

As the first and the foremost sign of realism, the UN special envoy described President Bashar al-Assad “as a crucial part of the solution to end the Syrian conflict.”

Signs of such realism can be seen in the U.S. policy as well as the Syrian moderate opposition, even if quite belatedly. With regards to the latter, the Syrian opposition seems to be going an obvious distance away from the earlier “Assad must go” or “Bomb Assad” mantra.

Similarly, President Joe Biden’s words back in October were telling: “Our allies in the region were our largest problem in Syria… Turkey, Saudi Arabia and the UAE were so determined to take down Assad that in a sense they started a ‘proxy Sunni-Shia war’ by pouring ‘hundreds of millions of dollars and tens of thousands of tons of weapons towards anyone who would fight against Assad’...the outcome of such a policy now is more visible.”

The second factor is to recognize the fact that the real threat is not Bashar Assad but the Islamic State. “The collapse of the Assad regime would be the worst possible outcome for American interests—depriving Syria of its remaining state institutions and creating more space for the Islamic State and other extremists to spread mayhem,” a recent study by the RAND Corporation, which does research for the U.S. government, noted. In the last year, the situation in Syria has changed quickly and dramatically. Fighting Assad has practically helped the Islamic State gain control of about half of Syria and one third of Iraq, while the rebels America and its regional allies support have become weaker and weaker. The UN special envoy has correctly spoken of “the need to focus on the real threat of terrorism.”

But this change of heart hasn’t yet developed into a well-thought overall approach and policy; other actors and quarters in the United States still seem bent on pushing the military option and arming the violent opposition forces in Syria. “To Defeat [the] Islamic State, Remove Assad,” wrote GOP senators John McCain and Lindsey Graham.

The simple fact of the matter is that simultaneously pursuing contradictory policies will not help end this protracted bloody conflict. This much is clear to all the parties involved in the Syrian mess—whether regional or supra-regional. Therefore, the third factor is that nobody is in a position to take it all in the Syrian gamble. Everybody has to bend and settle for the middle ground.

The fourth factor, one has to admit, is that efforts to end the conflict cannot be undertaken by any of the concerned or involved parties, in the region and beyond. But, the best efforts of the UN cannot be expected to bear fruit unless and until the needed political will—and a grand strategy—emerges in all the capitals involved to overcome past illusions and put their minds and energy, in some sort of coordinated work, to steer the situation away from further flaring up and towards gradual pacification.

As things stand, and given the factors that pushed the previous efforts and initiatives, including Geneva I and II, to failure, success of the new plan proposed by UN special envoy depends on a much larger political orchestration. As I see it, the five permanent members of the UN Security Council (P5) and the five relevant regional players—Iran, Iraq, Turkey, Saudi Arabia/ GCC and Egypt (R5)—should adopt a fresh look and approach to the Syrian crisis. Overall, agreement on the following steps could pave the way for an exit from the current deadly impasse.

There are six steps that must be taken.

Step 1: Agreement on general, reasonable principles such as: 1) Preserving the unity and territorial integrity of Syria; 2) Preserving Syrian state institutions, including the army and the civil service; 3) Engaging all Syrian stakeholders in the political process; 4) Exploring the middle ground through boosting moderates; 5) Ending safe havens for terrorists in Syria; 6) Ending the provision of arms and finances to the violent opposition;7) Ensuring the rights of minorities; 8) Enhancing humanitarian assistances; 9) Working for a power sharing system; and 10) Exploring a practicable formula for peaceful political transition.

Step 2: The formation of a broad-based forum comprised of moderate, non-violent opposition groups and the government.

Step 3: The declaration of a ceasefire to be monitored by international observers.

Step 5: The implementation of the above agreements and steps through the formation of a transitional governing body.

With ISIS as everybody’s common enemy—ISIS needs to be contained and defeated as effectively and expeditiously as possible—all parties involved should join hands to bring the Syrian mess to an end. This would deal the ISIS a devastating blow.

A wide range of political analysts and pundits, Americans and others, have been pointing to an important missing element in the bigger picture: some sort of U.S.-Iran entente—both of whom are players in the Syrian drama, albeit in their own ways. This could become a reality with the much-anticipated nuclear deal, which, fingers crossed, looks more promising than before.

Political resolve in both capitals should make a mutually-acceptable and reasonable deal a reality: the sooner, the better. Such a positive development, notwithstanding the strenuous efforts of its varied host of ill-wishers, could also help shape a more realistic, more balanced U.S. policy towards the Middle East—which will, by any reckoning, better serve everybody’s long-term interests.

Ambassador Seyed Hossein Mousavian is a research scholar at Princeton University's Woodrow Wilson School of Public and International Affairs and a former spokesman for Iran’s nuclear negotiators. His latest book, Iran and the United States: An Insider’s view on the Failed Past and the Road to Peace was released in May 2014.