How Foreign Leaders Are Navigating the Trump Era 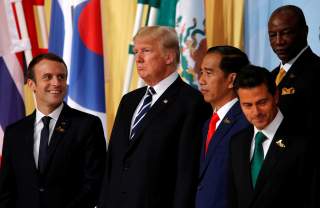 These are tough times for state visits to the United States, particularly if you are the Indian prime minister. Apart from the fact that Washington now has a new administration that seeks to overhaul decades of U.S. foreign-policy tradition, Prime Minister Narendra Modi’s visit last week was gate-crashed by other pressing crises. On the eve of Modi’s arrival in Washington, the New York Times daily briefing skipped any mention of his visit; it spoke instead of President Trump’s upcoming meeting with the South Korean president, which was still days away. The Korean Peninsula continued to garner attention even after Modi’s arrival and found mention in Trump’s remarks post his meeting with the prime minister.

Nonetheless, it was an important moment for a strategic partnership that refuses to progress as fast as many people would like it to progress. As in most other capitals, Trump’s arrival to the White House brought a sense of concern and uncertainty to New Delhi. Many wondered what his foreign-policy doctrine would look like, whether he could be trusted to continue the recent trajectory of U.S.-India ties, and whether his rejection of America’s traditional globalist role would hurt New Delhi at a time when its prime minister was rooting to push forward globalization. Just days before Modi arrived in Washington, Trump had partly blamed India for what he saw as an anti-American climate deal in Paris.

With all that in the background, few people expected much of Modi’s visit. The goal for most Indian diplomats was to keep things on track during the course of the prime minister’s state visit. In that sense, Modi did bring home some big wins for the U.S.-India bilateral relationship. The two leaders reaffirmed the strategic partnership and promised greater cooperation in maritime security and counterterrorism. They also delivered on some long-running work—namely, an agreement between the two countries on the UN Comprehensive Convention on International Terrorism and access for India to the Global Entry program, which expedites clearance for visitors to the United States. Above all, Modi managed to ensure that the bilateral agenda stayed on track and weathered the Trump administration’s paradigm shifts—for the time being.

Modi’s visit seemed to borrow from a playbook that is beginning to come together on how a foreign leader should handle Washington in the Trump era. In his earliest bilateral engagements with foreign leaders, Trump ruffled many feathers across the world. German chancellor Angela Merkel lectured him on America’s responsibilities on trade and immigration, leading to many awkward moments between the two leaders thereafter. Australia’s Malcolm Turnbull got an earful over the telephone for reminding the U.S. president of Washington’s commitment to accepting refugees from his country. Since then—even where leaders have had significant differences with Trump over issues of global governance—state visits and bilateral meetings have been largely cordial and successful when they have focused on business-like give-and-take transactions: military deals, trade agreements and statements of sympathy on the North Korean nuclear program.

When China’s Xi Jinping came calling to the United States in April, many observers were anxious about the fireworks that had preceded his visit. Trump had accused the Chinese of everything from manipulating their currency to exploiting America’s commitment to free trade during his presidential campaign and in the following months. Prior to meeting with Trump, Xi had spoken at Davos of the need to protect globalization from the wave of protectionism sweeping across the West, in an oblique reference to Trump’s win. Yet, the meeting did proceed rather cordially. Trump’s tone changed considerably in its aftermath, even involving a walk-back on the currency-manipulation issue. In its review of the meeting, The Economist wrote, “An ‘America First’ leader met a ‘China First’ leader. Neither cared to blink and offer early sweeteners involving this infrastructure investment, or that market-opening concession. But nor was either man distracted by lofty talk about saving the planet or strengthening civil society.”

Others like Modi and Canadian prime minister Justin Trudeau followed the Xi approach, not the approach taken by Merkel. And they reaped rewards for it. Despite his open differences with Trump over the U.S. refugee policy and his disagreement with climate sceptics in the United States, Trudeau told reporters in Washington that he was not going to use his bilateral summit to “lecture another country on how they should govern.” In return, Trudeau won personal assurances from Trump on preserving U.S.-Canada trade in a largely amicable meeting.

But all of that could change in a multilateral setting. There is no denying the fact that many emerging powers around the world see Trump’s anti-globalist tendencies as an opportunity to press their own global agenda. Days before he came to the United States, Modi had stood with Merkel to assert their joint commitment to the Paris climate accord, even as Trump was pulling out of it in Washington. Xi, Trudeau and French president Emmanuel Macron had also all voiced their strongest opposition to that decision. Recently, India’s chief economic advisor called on New Delhi to stitch together a coalition of middle-income countries to revive globalization in the face of challenges from the West. Given all those things, the G-20 summit in Hamburg could prove to be pivotal in reshaping the world order in the Trump era. It was, after all, Trump’s first multilateral meeting with the world’s major leaders, and Modi, Merkel, Macron, Xi and others likely used the forum to finally push their global agenda in the presence of the U.S. president.

Leaders have looked to play along with Trump’s “America First” agenda in bilateral settings for fear of jeopardizing bilateral ties and because they see the gains that such an approach could bring their countries—but a multilateral forum is a very different ball game.

Mohamed Zeeshan is a student of international affairs at Columbia University, and Digital and Online Director of the Columbia Journal of International Affairs. He is also a foreign-affairs columnist for The Diplomat, The National Interest, India Today and others.