How to Get China to Use Its Leverage against North Korea 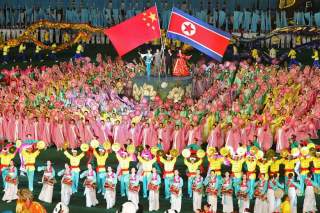 The ever-exciting Kim Jong-Un—aka the “un-leader”—has done it again. Thrice in two weeks, actually. While American, South Korean and Japanese leaders were meeting in Tokyo late last month to discuss how best to deal with his serial misbehavior, he fired off another of his “forget me not” fusillades—this one a ballistic missile fired from a submarine. Then, to reinforce the message, he launched three medium-range ballistic missiles into Japanese waters during the G20 meeting in Beijing and for a grand finale, lit off his largest nuclear test to date.

As so often in the past, North Korean misbehavior has elicited the usual protests and promises. Japan’s Chief Cabinet Secretary, Yoshihide Suga, declared that “Japan will not tolerate such acts” by “an outlaw nation.” The South Korean government called the actions a “grave provocation that can never be overlooked.” U.S. Secretary of State John Kerry said that he is deeply concerned. And, of course, the U.N. Security Council met in an emergency session for more discussion. All this has become dangerously routine.

But no speechifying will count for much without action from China beyond formal protest and weak sanctions. The danger posed by North Korea’s arsenal goes far beyond the immediate and obvious challenge of nuclear proliferation. It also threatens the strategic relationship between China and the United States. North Korea’s weapons programs have already prompted the United States to establish (and more recently expand) a Ground Based Interceptor (GBI) system in Alaska and California. And it has prompted America’s Asian allies to buy or host a variety of missile defense systems, including interceptors and radars.

It is time for a bargain between Washington and Beijing on a new and tougher approach – one that will require China to use its leverage to change North Korean behavior. Barring that, those most directly threatened— South Korea, Japan, and the United States—will rightly adopt new defensive measures that will, ultimately, impinge on Beijing’s security interests. China should understand that, as bad as the consequences for its security interests have been to date, they could get significantly worse. The classic security dilemma in which we are now entangled threatens to undo decades of stable economic growth and political stability in the region.

Both Washington and Beijing have equities in play.  China blames the United States and its allies for “adding oil to the flames.” It fears that U.S.-based and forward-deployed missile defense systems may be linked and that, in combination with U.S. offensive missile systems, these could threaten the viability of Beijing’s limited nuclear retaliatory power. In response, China has developed and deployed a wide range of offensive systems, including new classes of land-based mobile missiles, ballistic missile submarines, and multiple warheads for existing silo-based missiles. China’s nuclear force development has, in turn, undermined the U.S. commitment to pursue further nuclear arms reductions and encouraged it to instead modernize existing forces.

Concerns about the Asian strategic balance have now worked their way to center stage in the U.S. presidential election campaign—never a welcome development. Hillary Clinton has declared that the United States “will not allow” North Korea to pursue nuclear weapons, while Donald Trump has assumed a more insouciant posture. Both have called on China to do more to restrain North Korea.

They are on to something here, but have yet to flesh out important details. The North Korean economy is largely isolated, excluding trade with China. Weak sanctions imposed by the United States and others (with China’s support at the United Nations) have failed to dissuade the North from continuing with its weapons programs. It is unlikely—but not inconceivable—that the United States would undertake direct action against the North’s nuclear and missile programs. U.S. allies South Korea and Japan would face heavy retaliation, and a general war could follow.  Neither U.S. nor Asian leaders and their publics are likely to have the stomach for such action.

Instead, at some point soon, the countries most directly threatened are likely to stop waving papers of moral indignation in North Korea’s general direction and will get back to the business of buttressing their defenses. Prior to these latest provocations, South Korea had already agreed to U.S. deployment of Terminal High Altitude Area Defense (THAAD) on the peninsula.  Less widely recognized is that Japan’s missile defense and satellite-based surveillance programs were stood up in response to North Korea’s 1998 test flight of a Taepodong-1 missile directly over the Japanese archipelago.

Unsettled by these developments, Beijing has become less patient with North Korea over the last several years. Yet its trade with North Korea, which accounts for more than 85 percent of the North’s total and almost all of its oil, has remained extensive. Beijing’s reticence to impose more meaningful sanctions springs primarily from its fear of North Korean political and social instability—it already unenthusiastically hosts a significant number of refugees fleeing the North. Beijing is also not keen to see the reunification of the peninsula or the possibility that the U.S.-ROK alliance will extend northward.

The consequences of Chinese inaction, however, may be worse. Indeed, they might be described as a nightmare for Chinese defense planners: the deepening of U.S. alliances with Japan and Korea; increased military and intelligence cooperation between the ROK and Japan (they recently held their first combined missile defense exercises and have been discussing a formal intelligence pact); the joint U.S.-Japan development of new missile defense interceptors (including some that might be capable of intercepting intercontinental range missiles); the procurement and deployment of Japanese long-range strike capabilities (currently being studied in a new Japanese Air Self-Defense Force office); and increased U.S. investment in new defensive technologies (such as directed energy weapons and electromagnetic rail guns).

U.S. diplomats have made efforts to highlight these possibilities for China, but they may not have gone far enough. Such warnings do not constitute a U.S. threat or ultimatum. They are a simple statement of inexorable reality: the extant security dilemma drives everyone to an unhappy place.

But U.S. leaders should not only point out the downside of Chinese inaction. They should put an offer, or set of offers, on the table. If China agrees to impose a serious and graduated set of sanctions on North Korea– ones that the North cannot ignore – the United States might agree to freeze the deployment of GBI at their current number (and reduce the number as North Korea reaches milestones in dismantling its weapons programs). The United States might also agree, after consulting South Korea, to withdraw THAAD from the peninsula when North Korean nuclear weapons no longer pose a threat. Washington, together with Japan and South Korea, could assure Beijing that they will pay for (and potentially arrange) the resettlement of refugees from the North. Finally and perhaps most importantly, the United States could pledge that it will not station or exercise military forces north of the current DMZ if North Korea collapses and the peninsula is reunified.

As always, Washington will need to emphasize in its broader public diplomacy (as well as in its private discussions with Japan and South Korea) that its commitment to the defense of allies is unshakable – and that the United States will continue to deployed capabilities as needed to fulfill its obligations. But both GBI and the THAAD deployment to Korea have been justified exclusively on the basis of the North Korean nuclear and missile threat, and flexibility on the deployment of those systems would be well worth a verifiable end to the North’s WMD programs.

Beijing, which suspects that X-band radar associated with U.S. THAAD in South Korea might also track Chinese missiles, is unlikely to change course based solely on U.S. assurances about future moderation of U.S. strategic deployments. The bargain outlined above is not meant to change China’s perspective or its view of its own national interests. Rather, it presupposes that North Korea’s most recent provocations may bring Beijing to recalculate the costs of its inaction. We believe that a forthright U.S. acknowledgment of China’s own security equities and a willingness by Washington to compromise might help tip the balance in Beijing and pacify the Korean Peninsula.