How to Get Kim Jong-un Out of the U.S.-ROK Alliance's 'Head' 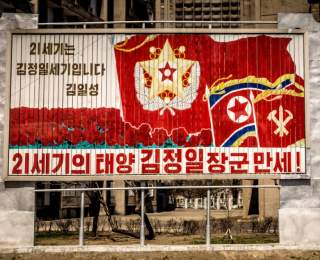 North Korea remains the most explosive flashpoint in Asia because of the potential for escalation and major war. As the U.S. Army Chief of Staff, General Mark Milley, puts it, “I don't know when, I don't know how, but at some point in the future, it is highly probable that Korea will be one country again.”  He adds, "Whether that happens peacefully or violently is a $64,000 question.”

The question of Korea’s future is further complicated by ceding first-mover advantage to Kim Jong-un. Kim is far more likely to surprise us than we are to surprise him. That’s a problem because we resign the U.S.-Korean alliance to a reactive strategy.

Take the near certainty that Kim would launch a missile to mark the 70th anniversary of the North Korean Workers’ Party on October 10th. The launch never happened and analysts are still debating why. Forecasting Kim’s decisions is a precarious business. Indeed, predicting a date certain for Kim’s provocations may be the best way to prevent them from taking place. But North Korea’s inaction suggests that Pyongyang has crept inside our decision-making loop. Kim thinks he understands what we will do, when we will do it, and how to get under our skin.

The 10/10 non-event appears to illustrate how the North Korean regime is inside the decision-making cycle of both the Republic of Korea and the United States. The alliance was poised perfectly to demonstrate strength in the event of another provocation. Absent an event such as a long-range missile launch, however, the Obama-Park summit was more memorable for its lack of deliverables, punctuated by an unfortunate misunderstanding regarding the transfer of technologies vital to South Korea’s indigenous next-generation fighter program. In the United States, the summit received scant attention.

But if the ROK-U.S. alliance is to prepare for a soft, hard, or no landing, it needs to be better at making its decision-making less predictable and understanding the machinations of Kim’s deliberative processes. This includes understanding the people and institutions inside all of North Korea’s echelons of power.

Fortunately, North Korea is opening from outside. This past month the Committee for Human Rights in North Korea released a major new study by Ken Gause (North Korean House of Cards: Leadership Dynamics Under Kim Jong-un) that dissects not just the Kim family, but also Kim’s personal secretariat, royal economy, and internal security apparatus. Gause’s book is essential to fashioning an alliance strategy for changing the balance of unpredictability on the Peninsula. By using Gause’s guide, policymakers can target key actors inside North Korea in order to force open North Korean decision-making. The appropriate tools center on information, human rights, trade, and the military balance.

By taking the offense on human rights, the ROK-U.S. alliance holds Kim accountable for the millions of North Koreans living in misery and locked away in political gulags. Kim’s decision to allow family reunions surprised many, but in all probability it was little more than a small tactical step backwards. He defused the August landmine crisis and bought some time. Yet the police-state scrutiny of South Korean visitors eager to see long-lost relatives belied Pyongyang’s paranoia. The Kim Family Regime both controls and fears information, and it could not allow a single thumb drive filled with news and soap operas to enter Asia’s most information-starved polity.

Human rights issues can drive a wedge between Kim’s autocratic governance and the Korean people.  While, democracies are not perfect, their built-in mechanisms for checks and balances and accountability of public officials make them far better for the average man and woman than autocracies.

Cracking down further on North Korea’s illicit trade is another area where the alliance must be active rather than exercise strategic patience. Understanding Kim’s $4-billion-a-year illegal economic enterprise centered on Offices 38 and 39, for instance, can help provide Seoul and Washington with more levers to dissuade Kim from future provocation and encourage compliance with international obligations.

Gause believes the next 2-5 years will be crucial for whether Kim truly consolidates his power.  This may be a regime living on borrowed time, he points out, and if so, the ROK-U.S. alliance also needs to be prepared for a sudden, crash landing. This might be precipitated by an act of miscalculation that spirals out of hand or it could be triggered by a palace coup. Either way, there will be little or no warning of such a cascade of events.

Perhaps a second round of reunions would serve Kim fine. However, what President Park sees as humanitarianism, Supreme Leader Kim sees as personal survival and benefit and he will no doubt engage in rent-seeking to grant South Korea such a “favor.”  Yet, this could open the door to another measure-for-measure baby step forward in inter-Korean relations. There is a path there, if only Kim will take it.

But the alliance must also not neglect a third tool for preventing North Korean unpredictability: namely, concrete improvements to military deterrence. Given the unlikelihood that Kim will soften his dream of Byungjin, the alliance needs to augment its multi-faceted strategy with specific steps to reinforce deterrence.  At the appropriate time, such a step might be deploying a Theater High Altitude Area Defense (THAAD) battery on the Peninsula. While we should want Kim to have to guess what we might do in peacetime, we should want to make sure that we are all too predictable in the event of North Korean aggression.

North Korea is like the proverbial house of cards in that it could come falling down fast.  It is also similar to the popular television series House of Cards in its treachery, because nothing is quite as it seems. Appearances are dangerously deceptive.  Through a comprehensive approach to North Korea, the ROK-U.S. alliance might be able to close the gap regarding strategic unpredictability.