How to Get the National Security Council Right 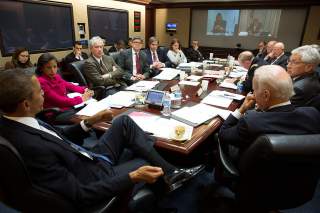 Many around the world and across the United States are watching with rapt attention reports about President-elect Trump’s potential national security team. His choices will be vital in shaping America’s international role for the years ahead.

After forty years as U.S. diplomat, having worked through presidential transitions, I am watching from the outside, teaching about foreign policy decision-making at Hamilton College this semester. My students have identified key lessons learned, good and bad, from U.S. administrations since World War II. Now, they are keenly watching to see if and how President-elect Trump will draw on those lessons in selecting his national security team and in designing his National Security Council (NSC) process. In an ever more complicated and interconnected world, Mr. Trump’s early decisions on people and structure will have a major impact.

Every NSC takes on a specific profile based on the president’s wishes. Administrations have learned from their predecessors’ experiences, international developments, and their own missteps to adapt NSC practices and structures. The team that many observers say represents the most effective model for a National Security Adviser and a well-functioning team and structure was that of George H. W. Bush. President Bush had the advantage of a great deal of international experience, and chose an NSC team with much national security expertise. They received good marks for their handling of the fall of the Iron Curtain, the reunification of Germany, the invasion of Kuwait, and the forging of trade agreements. The Bush team put the basic structures and practices in place that served as models for subsequent administrations. Excellent recent studies by the RAND Corporation, the Heritage Foundation and the Atlantic Council have synthesized lessons from earlier administrations to aid the President-elect.

Core elements for an effective NSC process are: selecting cabinet members and NSC leaders who can work together well; setting clear rules and expectations for teamwork; establishing effective structures for decision-making and implementation; and defining well the mission of the National Security Advisor and the NSC staff. The President’s attitude and engagement are vital. His preferences will shape the particularities of structure and process. However, the members of his national security team and the role and structure he approves for the NSC will enhance, or diminish, his chances for success in the international arena.

Getting the Team Right

Cabinet Secretaries will be chosen for their experience and philosophical compatibility with the president, but they also have to be able to work as a team and understand that if they don’t, they can be replaced. Several U.S. administrations were seriously weakened by persistent infighting among the NSC team, e.g., State and Defense (Reagan, George W. Bush), National Security Advisor and Secretary of State (Nixon, Carter). When the rules weren’t clear and/or the White House did not end the infighting, U.S. policymaking and implementation suffered. The president is served well by lively debate among his advisers. He deserves a diverse range of opinions and options. The process should avoid pitfalls of “groupthink,” by looking at alternatives and dissenting opinions. Having a team and process that tries to identify the effects of a possible decision or policy is a plus. Vietnam and Iraq stand out as major commitments where many believe the top-level decision making process was flawed, but there are many more examples. Importantly, the team needs to rise above their differences once the president has made a decision and work together to assure good implementation, without infighting or leaks and with egos and personal or agency agendas set aside.

Getting the role of the National Security Advisor Right

The “Assistant to the President for National Security Affairs” needs to have the president’s trust and confidence. Simultaneously, he must have the respect of the national security team as an “honest broker” and fair interagency coordinator to ensure that the president’s foreign policy agenda is carried out. This means avoiding situations where the Advisor is dominant (Henry Kissinger), not close to the president (Richard Allen, James Jones), carries out independent action (John Poindexter, Robert McFarlane), or keeps key agencies out of the loop. The National Security Advisor needs to be able to enforce “the rules of the game” with the president’s active support, to foster interagency cooperation, and to keep the NSC process flexible, adaptable and efficient.

Getting the NSC’s Role and Size Right

The National Security Advisor should lead an NSC staff that supports the president by: 1) helping to set priorities that require his attention; 2) seeking and providing multiple viewpoints that help the president make decisions and approve strategies; 3) assuring a functioning interagency committee process to develop good options, including contingency plans and exit strategies where appropriate; 4) monitoring and reviewing implementation of presidential decisions to assure that they are carried out well; 5) supporting effective crisis management; and 6) keeping attention on both immediate issues and long term strategic interests.

These tasks have become more complicated since Brent Scowcroft served as National Security Advisor to George H.W. Bush. Our economy and world are more globalized and intimately interconnected. We face more immediate threats to the homeland and to our interests overseas by non-state actors. Environmental and health threats are more salient. The impact of technology for good and bad, as evident with cybersecurity, continues to shake our daily lives. A number of these areas cross the traditional bounds of agencies and authorities and demand more “whole of government” coordination from the White House and the NSC. These developments have also added players to the team, such as the Secretary of Homeland Security and the National Director for Intelligence, while requiring that economic cabinet players be more fully integrated into the NSC process.

A great challenge for the new U.S. administration is to resist in the tendency for the NSC staff to grow in size and to take on operational responsibilities given the cross-cutting nature of many of the problems to be managed. Recent studies cite the second Obama term as taking on too much day-to-day management of foreign policy and getting too large (some 400-500) in the process. The studies argue that the NSC staff should return to a more reasonable size and focus on coordination of policy, strategy development, decision-making, and policy implementation. My sense is that a professional staff of around 150 seems reasonable. The flip side of a leaner, less operational NSC staff is demanding more accountability from agencies to develop policy options and carry out decisions. This would mean using more interagency working groups or task forces, with a lead agency to run the process and NSC monitoring, for example. Several observers recommend a greater NSC staff focus on long term strategic planning, which often is pushed aside by urgent business.

Some presidents have tended toward micromanagement (Carter) and others toward being distant from the NSC process (Reagan). A president needs to get the balance right, engaging daily with his National Security Advisor and meeting regularly with the National Security Council to discuss priority issues. A number of presidents have turned to informal advisors and smaller groups for making key decisions. There are advantages to private discussions and outside perspectives. Special Commissions can produce good ideas, as we saw post-9/11. But these practices should be supplements to engaging in a full NSC decision process designed to ensure that a range of options, including dissenting positions, are presented. Small group decision-making alone increases the chances of making serious mistakes: neglecting downsides or missing important side impacts for good or bad. There is a long list of examples where in retrospect the decision process has been questioned (e.g. Bay of Pigs, Vietnam escalation, the Iran Rescue Mission, Iran-Contra, Somalia intervention, Rwanda non-intervention, 2003 Iraq invasion and subsequent pull out, turning from Afghanistan in the early 1990s and again in 2003-05, and recent involvement in Libya and Syria). A President may make bad calls, but he should have the opportunity to hear a good discussion of perspectives, including the pros and cons of options for international and domestic interests, in the near term and as the policy plays out. U.S. engagements in Iraq and Afghanistan are stark reminders that commitments can be lengthy and have unanticipated consequences.

Getting the Messages Right

Finally, in today’s world of immediate information flows, the NSC staff needs not only to communicate clearly to the agencies the president’s vision and decisions, but it also has to assure that there is a comprehensive consultation and communication strategy with players outside of the administration: Congress, media, NGOs, allies, partners and enemies. Traditional and social media demand immediate and constant attention. Congress must be briefed and wooed, as must be key non-government organizations. International players must be rallied or held in check, as appropriate. Doing all of this well is today more essential than ever for making and executing policies.

Earl Anthony Wayne left the US Foreign Service with the rank of Career Ambassador in 2015. He served in the National Security Council and worked with it from the State Department as well as from Ambassador-level positions overseas. He served during a number of presidential transitions. He is currently the Sol Linowitz Professor at Hamilton College and a Public Policy Fellow at the Woodrow Wilson International Center for Scholars.