How to Get Tough with China 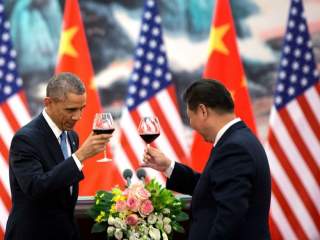 Exploit existing cultural exchanges and journalist programs to bring in emerging leaders, journalists and other influentials from like-minded nations in the Pacific to examine such topics as the likely future impact of PRC hegemony on the Asia-Pacific region.

These are simply a few strategies and tactics. There is much more that should be done. But the United States must quickly get beyond its often confusing, timorous statements suggesting “grave concern” from State Department spokesmen or other U.S. government officials. The United States must begin to speak firmly, clearly and consistently.

Meanwhile, in the existing vacuum, the Chinese position is heard repeatedly from multiple channels, as if playing on a loop. The PRC’s claims may be nonsense, but if they unchallenged or inconsistently opposed, the relentless claims tend to reinforce the Chinese position and create a sense of inevitability.

Public anger over corruption is probably what scares the Communist Party of China’s leadership the most. The CPC has outdone the old pre-1949 KMT in terms of corruption. One may be skeptical of President Xi’s selective efforts to punish corruption—until, perhaps, he arrests a relative. Regardless, the problem is too deep-seated in the nature of the Communist system for Xi to fix.

The United States should stop abetting the illegal capital outflows that constitute one of the biggest thefts in history. CPC efforts to suppress the recent Panama Papers reports that included evidence of leading CPC families’ involvement in secret offshore companies, and its harassment of the New York Times and Bloomberg several years ago for reporting ruling-class corruption, show how this issue frightens the Chinese leadership.

Expose ruling-class corruption—perhaps starting with the top fifty CPC leaders and their families—and trumpet it repeatedly and widely. The United States is aware of part of the problem, but it can uncover much more with proper effort. Simply requiring Chinese investors in the United States to prove their money was lawfully exported from the PRC would be useful.

For those already here, selectively place liens on real estate and finances. And suspend green cards, until the card holders provide a note from the PRC government verifying and explaining how the money to make their grand purchases was lawfully exported from China. This may resemble “Chicago politics,” but that is sometimes appropriate, and something the current U.S. administration is presumably familiar with.

The PRC routinely claims its actions are just a response to mistreatment (past and present) by foreigners. This is debatable, but CPC corruption is unquestionably a homegrown phenomenon that’s hard to blame on outsiders.

America must develop and implement a comprehensive strategy to stop PRC aggression. Until such a strategy is developed, though, it is imperative that the U.S. begin demonstrating real resolve, and impose meaningful costs on the PRC for its actions.

The point of the recommendations made herein is not to “bully” the People’s Republic of China. Indeed, there is something depressing about all this, as there has never been a country more welcomed and encouraged to become a responsible member of the world community. Nevertheless, it is past time to begin actively deterring the PRC from its increasingly brazen and dangerous actions.

By deterring China, the United States defends its interests and the free world’s interests in respect for the rule of law, and the notion that big nations cannot take by force what they want from little nations.

Conversely, by failing to deter China, America acquiesces to the belligerence of an authoritarian regime whose stated intent is regional domination. This failure will prove devastating for the United States’ friends and allies in Asia, and for America’s future regional and global prospects.

Grant Newsham is senior research fellow at the Japan Forum for Strategic Studies. He is a retired U.S. Marine Colonel and a former U.S. diplomat. Kerry Gershaneck is a Senior Associate with Pacific Forum CSIS, an associate with the East-West Center, and a professor at a major Asian military academy. He is a former spokesperson for the Office of the Secretary of Defense, and directed strategic communications operations in both the Asia-Pacific region and Southwest Asia.