How to Get War Wrong in the 21st Century 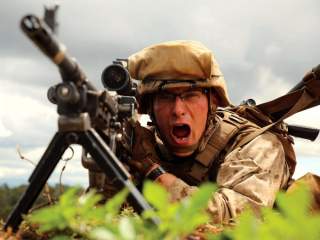 What’s next? Will U.S. troops head back to Iraq? Reinforce in Afghanistan? Join an international peacekeeping force in Libya? We'll see. Meanwhile, we can be sure of seeing at least one thing in the future: a flood of literary reminiscences and dramatizations that try to make sense of the last decade's series of military campaigns in far-off theaters.

One book—War from the Ground Up: Twenty-First Century Combat as Politics (2012)—has already impacted military thinking on future fighting. Penned by Emile Simpson, a youngish former British infantry officer, the book draws heavily on his experiences in three combat tours in Southern Afghanistan and other overseas deployments. War from the Ground Up offers prescriptions for managing military force in messy places. Sadly, Simpson's solutions, though well-intended, are seriously misguided.

War weariness is wearing thin. Polling shows Americans are growing more, not less concerned with threats to national security, particularly terrorism. That may in part explain why the last decade of fighting has not become another “forgotten” war. Already there are calls to build a national memorial for those who fought in Iraq and Afghanistan, remarkable for a nation that is just getting around to unveiling a memorial commemorating World War I.

This century’s fighting has secured a beachhead in modern memory. And, unlike the spate of anti-war books and movies popular after Vietnam, today’s most popular reminiscences are neither anti-war nor anti-military. Audiences haven’t shied away from grim films based on true stories, movies like Lone Survivor and American Sniper. Indeed, the latter was the top grossing film in the United States in 2014. Nor have they snubbed books about days on the battlefield. Titles such as “One Bullet Away” and “Not a Good Day to Die” became best-sellers.

More works are on the way as well. Mark Bowden's “The Three Battles of Wanat” is due out this year. The author of “Blackhawk Down” leads off his anthology of previously published long form essays with five stories on different faces of modern conflict. Another coming soon is “Pale Horse,” a detailed small-unit action narrative of fighting in Afghanistan's Korengal Valley by Jimmy Blackmon, a retired senior combat leader. And in country music, the most popular stuff heralds the service and sacrifice of the armed forces.

Remembering, honoring and understanding the trials of those who fought the last war is important—but no less vital than coming to grips with what the next soldier will face in combat. Unlike the recent spate of popular movies and books, “War from the Ground Up” is more war theory than war story. Simpsons aims to put his personal experiences at the pointy end of the spear to show how contemporary conflicts and the use of military force have evolved since 9/11. It’s the kind of book that people are willing to paying attention to right now. Americans are as interested in getting it right as they are in getting over a tough decade and half of ambivalent war.

Simpson's touchstone is Carl von Clausewitz, the nineteenth-century Prussian military philosopher whose primary work, On War, was written after years of Napoleonic conflict. For most of the twentieth century, On War was the point of departure for discourses on war-fighting. Simpson, however, argues that conflicts like the dust-up in the Sunni Triangle and the fight for hearts and minds in the Helmand Province are distinctly different from the combat Clausewitz knew.

In On War, Clausewitz counseled that the purpose of armed conflict was to achieve military victories that supported the achievement of political ends. Militaries fight to set the conditions for a political solution. That was then. Simpson contends that, in contemporary conflicts, troops are sent into the field to “directly seek political, as opposed to military outcomes.”

War is different he argues when, “military activity is not clearly distinguishable from political activity.” As a memorable example, Simpson draws on his own trials in Afghanistan. Reversals in Helmand, he contends, resulted from the removal of the provincial governor who had kept the local Taliban in check rather than a lack of war-fighting prowess in the International Security Assistance Force (ISAF). ISAF got the politics wrong—a much bigger deal than whether units could successfully implement counterinsurgency doctrine.

War from the Ground Up has brought Simpson more than a few kudos. Veteran war reporter Tom Ricks wrote that he "was amazed this was written by a former lieutenant. . . ."

"a work of such importance that it should be compulsory reading at every level in the military; from the most recently enlisted cadet to the Chief of the Defence Staff and, even more important, the members of the National Security Council who guide him."

Not everybody has had the same reaction. In War on the Rocks, a Web site widely read in military circles, National Defense University Fellow Frank Hoffman blasted the book, concluding that its "discursive nature, lacking in structure and clarity, is more confusing than illuminating.”

Hoffman has a point. Simpson's dense and academic discourse muddles an understanding of Clausewitz's principle message. Though On War emphasizes that military victory is usually achieved by applying superior combat power at the decisive time place, that was just common sense. That was how battles were won in the Napoleonic age of mass armies and linear warfare. But Clausewitz’s theoretical conceptions of conflict transcend the practical advice he offered to the warriors of his time. Clausewitz's key message was that war was contest between thinking, scheming, determined adversaries. There is no expectation that the nature of conflict, the instruments employed and the nature of the space where militaries were deployed would be fixed and unchanging. Much of War from the Ground Up is dedicated to arguing something Clausewitz would have accepted as axiomatic: There are few constants in conflict.

Love or hate War from the Ground Up, people are paying attention. One of Simpson's central themes, woven throughout the book and highlighted in the conclusion, is that when military forces serve primarily a political purpose it is critical to get the "strategic narrative" right. The narrative must be a compelling articulation of the purpose of the military action—one which establishes the legitimacy of the presence and use of armed forces, thereby winning the acceptance and support of key audiences who can influence the success of both the action and the political purpose it serves.

Simpson didn't invent the notion of a strategic narrative. Military thinkers borrowed it from the late twentieth-century business culture. In the 1980s, the importance of narratives or storytelling in crafting winning-business strategies was used to help explain the unexpected dominance of the Japanese auto industry.

Even before War from the Ground Up, the U.S. military was hyping the importance of strategic narrative. A 2011 Joint Forces Command handbook, “provides a discussion of the 'Battle of the Narrative,' including planning and analysis considerations.” The manual explains that:

The Joint Forces handbook obsesses about narrative as a component of information warfare, but Simpson goes a step beyond and makes good storytelling the centerpiece of the successful employment of military force for political purposes.

Currently, the Army Training and Doctrine Command is rethinking how to organize planning for campaigns and major operations, a conceptual process that starts with drafting the strategic narrative.

The Tyranny of New Ideas

But making the storytelling the centerpiece of military planning ought to raise real concerns.  When narrative becomes all important, it is all too easy to believe the story is reality. History is replete with examples where compelling narratives do little more than feed cognitive dissonance, masking failure and shortfalls. Obama's use of narrative is a glaring example. The president still trumpets ending wars in Iraq and Afghanistan and leading from behind in Libya, three compelling stories that obfuscate reality. U.S. interests and objectives are at grave risk on all three fronts. The administration may have its narrative down—but that hasn’t deterred reversals in the field or increasing concerns that the White House strategy just isn't working.

In contrast, Putin has also invested a lot in strategic narrative. Through direct action and disinformation, Moscow spins a line that it is fighting fascism in Ukraine and terrorism in Syria. Arguably, Putin's take strains credulity in the West. Moscow's narrative falls flat. Still, it doesn't much matter. Putin is perceived to be winning on the ground. In the battle for political space, the show of strength is earning him grudging respect and legitimacy.

Obsession with strategic narrative can also create problems in operational planning. Rather than focus leaders on purpose and task, it could well add to the confusion and chaos of trying to figure exactly why the military should be the instrument of choice in the first place and what it ought to properly be used for. Sometimes sending the military makes sense for sending the right political message.  The deployment of troops in response to the devastation left by Katrina is a good example. Under General Russel L. Honoré, Joint Task Force Katrina was as much about restoring trust and confidence that help was on the way, as it was about actually delivering aid. On the other hand, sticking Americans in outposts in the Afghan outback (without a viable military mission) just to convince Taliban warlords to come to the negotiating table doesn't seem to pass the common sense test.