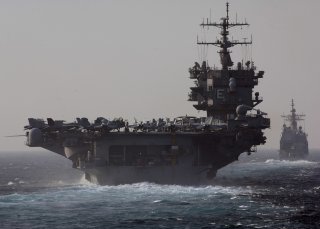 Over the past decade, the Red Sea region’s strategic environment has been experiencing a fast transformation, as a result of intensifying competition and military build-up by Middle Eastern countries and global powers. On the one hand, the growing external involvement was fostered by profound problems of the region that brought destabilization, fragmentation, and extreme poverty to Somalia, Sudan, and Yemen. These conditions allowed for radical violent Islamist movements—the Islamic State, al-Shabaab, the Houthis, and Al Qaeda—to strengthen. On the other hand, Africa poses enormous economic opportunities that attract investments and military presence from these outside actors.

The Red Sea region, spanning from the Horn of Africa and the Gulf of Aden, possesses tremendous economic importance for the global economy as a major hub of trade routes (valued at $700 billion U.S. dollars annually) between the Mediterranean Sea and the Indian Ocean. The Bab el-Mandeb Strait in the South and the Suez Canal in the North provide maritime chokepoints, often attracting “troublemakers” (pirates, terrorists and rogue state actors). The Red Sea coast, ports, and waterways are the main sources of trade and revenue for the littoral countries, most of which are among the poorest in the world and are entangled in long and violent conflicts.

The international interest in the region has fluctuated over the years. During the Cold War, the Soviets, while promising progress and socialism, in fact, supplied significant military and economic resources to new-born decolonizing belligerent regimes to fight each other (primarily Somalia, Ethiopia and South Yemen). The United States reciprocated by giving its support to the opponents of Soviet “clients.” The loss of Soviet interest in the area in the late 1980s was followed by further disintegration of Somalia, the protracted Ethiopia-Eritrea war and the intensification of internal conflicts in Sudan and in Yemen. It also initially compelled the United States to play a more active role in Somalia, best remembered through the1993 “Black Hawk Down” incident.

The growing piracy and terrorism had returned the region into the spotlight in the 2000s, resulting in growing maritime anti-piracy and anti-terror military presence from major global powers. Furthermore, Gulf monarchies (mainly Saudi Arabia, the UAE, and Qatar) and Turkey had increased their activity in Africa over the last decade, trying to mediate compromises in major local conflicts, but also seeking military basing rights and economic concessions. Iran also sought (and is still seeking) to acquire pressure-points vis-à-vis the United State and the Gulf monarchies through military presence along the international waterways.

In the last decade Ethiopia, Djibouti, Egypt and the practically independent Somalian regions of Somaliland and Puntland had succeeded to channel the international attention into bolstering their economies and strategic standing. However, the international (primarily Middle Eastern) aid pumped into the region has strings attached and threatens to pull the Red Sea region into the mosaics of global, intra-Middle-Eastern and local rivalries. While regional leaders have traditionally tried to profit from the external struggle of intervening powers in the Red Sea region, all too often they proved unable to manipulate the external actors and found themselves weakened.

The growing animosity between the “middle powers” from the Middle East contributes for further destabilization the Red Sea region in recent years. The Turkey-Qatar Axis is squabbling over influence versus Egypt, UAE and Saudi Arabia. The Ethiopian Nile dam inauguration raised tensions between Adis Abeba, Cairo, and Khartoum. The Saudi-Iranian proxy war in Yemen didn’t deliver a cease-fire but brought a new split in the anti-Houthi coalition.

The Saudi-Egyptian-UAE coalition’s confrontation with Turkey and Qatar is escalating in Africa over the last year as the former has accused Turkish leader Erdoğan of striving to revive the Ottoman caliphate and having “colonialist delusions” in the Arab world. Their proxy-war in Libya pressures Red Sea actors to get involved. For example, the new government in Sudan is fighting Turkish attempts to enlist Sudanese mercenaries from the local Muslim Brotherhood to fight in Libya.

The Emirati-financed Arab Weekly, meanwhile, has been particularly vicious over the past months, with articles accusing Turkey of building up its presence in Yemen, specifically in support of the Muslim Brotherhood-affiliated Al-Islah Party. The Egyptians have been recently negotiating a new base in Somaliland, while in January 2020 Cairo inaugurated the 150,000-acre Bernice military base, one of its largest, built with the support of the UAE. The Emirates has bases in Eritrea ports in mainland Yemen and in the last months took the Yemeni island of Socotra under their control.

Even the attempt to generate a framework for regional cooperation is driven by competitive dynamics. In January 2020 the “Council of Arab and African States bordering the Red Sea and the Gulf of Aden” was formed as a result of intensive diplomatic efforts by the Saudis. Since then the organization had failed to become an effective coordination body. Although the original idea was to promote cooperation on economic, cultural and environmental issues, the Saudis strived to refocus it on the political-security agenda. A narrow definition of “littoral states” marginalized, and probably intentionally excluded important stakeholders such as Ethiopia but also Puntland and Somaliland. Having Somalia (supported by Turkey and Qatar) inside complicates getting to common goals with the pro-Saudi members.

While occasionally working actively to decrease wider regional tensions, Washington doesn’t succeed to reduce antagonism between its various Middle Eastern allies. Practically, the U.S. agenda in the region is quite narrow: targeting terrorists in Somalia and Yemen, anti-piracy missions, fighting Iranian influence, and more recently, depriving China and Russia of opportunities as a part of great-power competition.

The Chinese People’s Liberation Army Navy (PLAN) base in Djibouti, inaugurated in August 2017, was carefully branded by Beijing as a logistical hub, meant to support PLAN peacekeeping and anti-piracy operations in Africa, the Red Sea, and the Gulf of Aden. While those kinds of operations have apparently since decreased, the Chinese base force composition implies a wider scope of potential future tasks, including special forces missions and cyber and electronic warfare. As the only active PLAN base afar from China’s mainland, it draws a lot of apprehension from the United States and is suspected by it, to exemplify the military tier of the Belt and Road Initiative.

The aggressive military intentions attributed to the Chinese in this part of the world, are still waiting to be proved. Yet, the demand from the regional actors to pick a side between the United States and the People’s Republic of China is growing and adds destabilizing pressures on the region, potentially damaging American interests.

The United States is also highly negative of Russia’s “Pivot to Africa.” Despite limited financial resources, Moscow succeeds to find meaningful influence channels through arms sales, political support for local regimes, and natural resources exploration. The Red Sea and the Gulf of Aden are natural extensions to Moscow’s ambition to regain influence in the Middle East. Apparently, Moscow is undertaking efforts to obtain a military base in the region.

The United States seems to lack a coherent strategy towards the region, having a difficulty to synchronize its interests in Africa, the Middle East as well as their global dimension. Furthermore, the United States’ African policy has got embroiled in a political struggle in Washington. The last episode disrupting the U.S. strategy in the region is the order given to its African Command to move its headquarters outside of Germany, without a decision where it will be restationed.

The current strategic trends in the Red Sea region enhance a prospect of further security destabilization and of a setback in the realm of economic and social development of the fragile political entities in the region. African and Arab economies have been hit hard by the coronavirus pandemic, which has also diminished the international trade through the Red Sea. The coronavirus crisis has strained American-Saudi relations (through the oil price war) and exacerbated the confrontation between the Trump administration and China as the U.S. presidential elections loom.

It is obvious that the Middle Eastern “mid-power” and the great-power competitions in the Red Sea are interconnected. Since the days of the Obama administration, the United States has tried to decrease its global military footprint and expected its allies worldwide to play a greater role in regional security. During the days of the Trump administration, the void of Washington leadership role in the Middle East and Africa had exacerbated the unrestrained influence struggle between the different U.S. allies.

The United States is susceptible to analyze the region primarily through the paradigm of global strategic competition, to concentrate its efforts on containing growing Chinese and Russian influence, and therefore to sideline the problems of importance to regional actors. In reality, the Red Sea is not the core area where the strategic competition takes place, and for the foreseeable future, U.S. military supremacy in the area will remain overwhelming. Beijing is only taking its initial steps in terms of power projection, and Russia is seeking to harvest “low-hanging fruits,” incapable of serious investment there.

The Red Sea and the Gulf of Aden region is another example of the deficiencies both of “Leading from behind” and of “America First” approaches. The next American presidential administration should generate a coherent policy towards the Red Sea arena. While remaining vigilant of Beijing’s and Moscow’s future regional intentions, Washington does not have to increase its military footprint or allocate many more financial resources in the area in order to secure its leadership position. It should reassure all the stakeholders of its intention to play a meaningful regional role through the promotion of partnerships and deconfliction mechanisms. Yet, it is difficult to envision a transformation of regional dynamics unless Washington will act proactively to restrain the internal struggle between its own allies.