How to Halt the Slide towards a Hollow U.S. Military 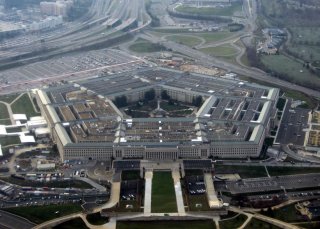 Here is a prediction: The defense budget will get a cash Band-Aid in 2016.

Washington may be about to experience one of those rare moments when smart politics coincides with smart policies. Instead of wringing its hands over surviving under “austerity” budgets as far as the eye can see, the Pentagon ought to be thinking strategically about how it might use a little extra “juice” next year to preserve a bedrock of military capability—a bedrock upon which it can rebuild further down the line.

The story so far goes like this. Former Defense Secretary Robert Gates put a pile of spending cuts on the altar of “Domestic Investment,” hoping it would be enough of a “peace dividend” to placate the White House. The Secretary’s 2012 budget proposed spending only $584 billion. The recent report of the Congressionally chartered National Defense Panel (NDP) called that proposal the “benchmark” for a reasonable, steady state budget. But that spending level quickly became the ceiling, not the floor, for future defense planning.

In succession, the Defense Department spun off three supposedly “strategic” documents, each seeking to justify the need for less military capability in the face of growing threats. The culminating document was the 2014 Quadrennial Defense Review, which the National Defense Panel (NDP) and others rejected out of hand as a basis for sound defense planning.

On top of the president’s plans for the Pentagon, sequestration imposed under the Budget Control Act trimmed military spending even more. The NDP concluded that the impact of the cuts on defense were “self-defeating” and a “serious strategic misstep.”

None of this might have been enough to change Washington’s thinking about the Defense Department’s trajectory. But then reality intruded.

First, it became increasingly apparent that the Pentagon was unable to maintain even the lesser capability and capacity Obama thinks is necessary. The NDP concluded the 2014 QDR force is unachievable under the sequester. Panel members declared that “Congress and the President should repeal [sequestration] immediately.”

Keeping the military from going “hollow” requires capability sufficient to maintain trained and ready forces, conduct current operations and prepare for the future. The Pentagon has gone from sending smoke signals to waving red flags that, increasingly, they are struggling to meet all these requirements.

Second, the world looks like it is on fire. The “summer of chaos” has presented President Obama with challenges from the four corners of the world. Almost every one of them has required an element of U.S. military power. America is dispatching troops to help fight Ebola, to secure the border and to train with the Europeans as warning to the Russians. It looks as though the United States will be keeping forces in Afghanistan and sending them back to Iraq. Meanwhile, the Pentagon is dipping into its already-depleted inventories of cruise missiles and bombs to deal with the troubles in Iraq and Afghanistan.

The upshot of all this: Washington is more worried about the state of military preparedness than it was just a few years ago.

Here is another prediction: Nobody is going to be running for president in 2016 arguing for eight more years of Mr. Obama’s defense and foreign policy—even if Joe Biden is one of the contenders. Granted, a mainstream candidate from the president’s party is unlikely to trash everything done from the Oval Office. But all will, in their own way, argue they can do better. We have already witnessed Hillary Clinton calibrating how far she can distance herself from the White House without stirring the pot too much.

Likely as not, the principal candidates from both parties will offer some version of a “peace through strength” platform. That’s not to say candidates won’t be promising to find efficiencies in defense. They should. Any responsible steward of the defense budget ought to ceaselessly strive to get the most value out of every dollar invested.

On the other hand, everyone is going to be arguing for sustainable investments to rebuild the capacity and capabilities needed to secure the nation’s vital interests.

There is a case to be made for both parties offering a serious defense budget as they go into the general election in 2016. How the Congress and the president could get to a respectable compromise on that budget is anybody’s guess. But, that said, they could well try to get there, therefore, making it well worth the Pentagon’s while to start thinking now about exactly what it should do if the politicians do decide to “plus-up” its budget.

1. Beef up Readiness Across the Board:

The services have each taken their own approach to averting a readiness crisis under the pressure of sequestration and continued operational requirements. The Air Force has looked to trim training and readiness to preserve modernization accounts. The Marine Corps has done the opposite, looking to compromise anywhere but on readiness. The Army and Navy are somewhere in between, propping up readiness in some areas and taking “risk” in others. The problem is that they must fight as one joint force. The haphazard approach to readiness is like having a car with good brakes, bad steering, half-a-tank of gas and one working headlight. A plus-up across the board would level the playing field.

2. Put Money Back in Modernization Accounts:

That would send a great signal that the U.S. government is planning to restore some predictability and consistency in funding for major defense programs like submarines, the F-35, air-refueling tankers and surface ships.

Sustaining the ground-forces levels is the quickest way to add capacity and capability back into the force. Putting them in Europe sends Russia and others in the Middle East a strong message: We are watching you and are prepared for action.

All three of these initiatives would demonstrate that U.S. military power is back in the global game and no longer in retreat. They would establish a foundation for a systematic and disciplined rebuilding of the future force in years ahead. And they would help America deal with the aftermath of 2014’s summer of chaos.