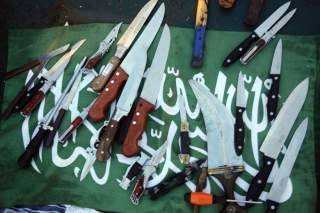 The arrests of the head of a U.S. charity operating in the Gaza Strip—and of an UN engineer—put the international spotlight on terrorism finance in the nonprofit world.

The allegations leveled against Christian charity World Vision prompted Australia and Germany to suspend their donations to the NGO earlier this month.

Mohammad El Halabi is the executive director of World Vision in Gaza. He was arrested at the Erez Crossing between Israel and the northern Gaza Strip in June and then charged in August by the Shin Bet—the equivalent of the FBI—with funneling tens of millions in donor aid to Hamas. Both the EU and the United States classify Hamas as a terrorist organization. Some of the funds diverted to Hamas were earmarked to help disabled Palestinians.

The Shin Bet alleges that El Halabi joined Hamas’s military wing, the Qassam Brigades, in 2004, before joining World Vision in 2005. According to the indictment, El Halabi was instructed to join a foreign nongovernmental organization and rise high enough to begin siphoning foreign aid to Hamas projects. In 2010, El Halabi was named executive director of World Vision in Gaza.

El Halabi’s lawyers deny the charges against their client, despite his confession to the Shin Bet. His lawyers asserted that “Israel can link anyone living in the Gaza Strip to Hamas.” It’s an interesting defense. El Halabi’s lawyers are trying to insist that Israel can fabricate connections in Gaza, but that Hamas’s grip on the local NGO scene is absolute. The terror group routinely co-opts foreign charities and organizations. The UK-based charity Islamic Relief Worldwide was banned in June 2014 from operating in Israel because it allegedly funneled funds to Hamas.

The UN’s refugee agency for Palestinians, UNRWA, was famously manipulated during the 2014 war with Israel. Hamas used UN-funded schools to store rockets, and a Palestinian group “highly likely” launched rockets at Israel from a school facility.

On the heels of the arrest of El Halabi, the Shin Bet announced that the UN engineer Waheed Borsh was detained for providing material aid to Hamas.

Borsh is employed by the UN Development Program. His job was to raze houses in Gaza damaged during Israel’s 2014 Operation Protective Edge war with Hamas. Israel charges him with abusing his position to carry out a number of activities for the terrorist organization, including aiding Hamas’s military wing in the construction of marine docks using UNDP resources.

Tensions between Hamas and the Gaza-based NGOs have often escalated. Many have refused to comply with Hamas’s demands, which include prior registration with Hamas’s interior ministry, disclosure of complete fiscal reports and strict visa demands for foreign workers. NGOs and Hamas have traded accusations of corruption in Gaza, and some organizations have even publicly condemned Hamas’s actions, including the use of the death penalty. Still, World Vision does not appear to be among the anti-Hamas NGOs. The Shin Bet alleges that under El Halabi’s management, the group funneled approximately 60 percent of its foreign aid into terror tunnel construction and arms procurement.

Australia’s government, which contributed $4.35 million over the last three years to World Vision, promptly ended its aid to the NGO.

German government agencies pulled the plug on the transfer of $3.6 million to World Vision because of the allegation of financial misconduct.

Volker Beck, a leading German Green Party MP, said: “World Vision massively damages the trust necessary for aid work for the people in Gaza,” adding that “Hamas is a terrorist organization, which should not be financed with taxpayer funds.” Germany provided at least $1.1 million to World Vision in 2010.

The suspension of aid to World Vision is the latest German effort to rope in illicit funding and to crack down on terrorist organizations using charity status for covert operations. In 2010, Germany designated the IHH group as a terror entity. The German IHH group was connected to the Turkish IHH group, which was responsible for violating Israel’s legal naval blockade of Gaza in 2010. Israeli commandos intercepted the IHH’s Mavi Marmara vessel on its way to Gaza. The seizure of the ship resulted in the deaths of ten Turkish Islamists.

The lack of control and accountability mechanisms governing German NGOs operating in the disputed territories has long been a subject of intense criticism from Israel watchdog organizations. A Wall Street Journal article by David Feith argues that the World Vision scandal pales in comparison to the aid provided by the PLO and its organs (i.e., the Palestinian Authority) to the families of terrorists who have murdered Americans and Israelis. Consequently, new scrutiny by Democratic and Republican U.S. lawmakers seeks to slash funding to the Palestinians.

The growing number of cases of terrorism finance via NGOs and UN agencies necessitates new kinds of controls to stop the misuse of funds meant for charitable purposes.

Benjamin Weinthal is a fellow at the Foundation for Defense of Democracies. Follow Benjamin on Twitter @BenWeinthal.