How India Is Benefiting in the Trump Era 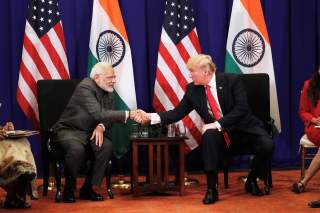 Over the last fifteen years or so, no area of American foreign policy has been more promising than U.S.-India relations. The relationship has gone from strength to strength since the end of the Clinton administration. Today, India policymakers often seem not only comfortable with President Donald Trump’s foreign policy, but enthusiastic about it.

No doubt this has something to do with his tough approach to Pakistan. But it’s also about China. The Indians finally have a partner in Washington who sees China in the same geopolitical terms they do. More than that, they see an American administration willing to risk its relationship with China in furtherance of a balance in the region.

But not trade concessions. Appealing to the China threat will not call off the Trump administration’s pressure on longstanding trade complaints. There may have been some uncertainty about this early on in the new administration. Not now. New Delhi must come to grips with American trade concerns on their own terms—unrelated to broader strategic convergence.

This relates directly to current trade negotiations. In a nutshell, India wants continued access to the General System of Preferences (GSP), i.e. duty-free treatment for roughly $6 billion of the $50 billion in goods India ships to the United States every year. And the United States wants better access to Indian markets.

These discussions cover several product areas—such as medical devices and dairy products. They also encompass issues not directly related to exports, such as differences over where investors store their digital data. That’s a big issue for American credit card and Internet companies, and part of a major global debate.

At this point, however, the key to unlocking a deal is India’s tariffs on high tech goods—seven tariff lines, including smartphones, smart watches and telecommunications networking equipment.

The impasse stems from the “Make in India” initiative. As the name implies, this is an effort to encourage the manufacturing of more products in India. It is industrial policy—no different, except perhaps in effectiveness, than Beijing’s “China 2025” program. No different, except in terms of scale, than America’s use of tariffs to promote its steel and aluminum industries—something India has rightly protested.

In the specific cause of promoting investment in the information and communications technology (ICT), New Delhi has enacted a series of new tariffs. The problem is that this violates commitments it made under the WTO’s 1996 Information Technology Agreement.

The Trump administration is pushing back—as well it should. Not only because India must be kept its WTO commitments. It is reasonable to assume that if Delhi gets away with violating its commitments in this case, it may find convenient reasons to do so in other areas as well. Most importantly, the United States is right to challenge India on this because its policy inhibits American exports, both those going directly to India and those routed through global value chains.

The fact that final assembly for many of these products is in China does not matter. Appeal to common U.S.-India geostrategic interest vis à vis China is not going to win the day. American companies support the administration’s push for market access. Their interests and the interests of the people they employ will shape the Trump administration’s approach. If India wants to become a leader in ICT manufacturing, it should do so in keeping with its WTO commitments. It will not find in America a partner willing to help it compete with China to the detriment of Americans’ own commercial interests.

U.S.-India relations have a bright future. Strategic convergence is a major reason. Economic ties are a contributor as well. They are the product of different dynamics, however, and must be treated separately. The better New Delhi absorbs this and addresses the substance of American trade concerns, the better the two sides can focus on the real threats from China that worry them both so much.

Walter Lohman is the director of The Heritage Foundation’s Asian Studies Center.

Did India's Special Forces Just Send 'A Message' to China and Pakistan?