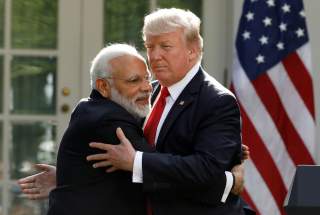 The United States should not attempt to make India part of a U.S.-led alliance aimed at containing China. India should be made part of a U.S. policy that supports India to first be strong, stable, capable, democratic and outwardly looking with global interests that support U.S. interests in an Asian strategic rebalance. The United States should help India convert its elements of national power into instruments of national power.

The Indian Ocean region remains the most important strategic area for India’s security interests. The United States should discuss the possibility of building an informal quadrilateral framework among India, Japan, Australia and the United States. These nations have already established trilateral dialogues: United States, Australia, Japan; United States, India, Japan; and Australia, Japan and India. A previous attempt to form a quadrilateral dialogue collapsed in 2008. Now is an opportune time to reexamine the possibility of holding such a dialogue. The United States should also encourage closer bilateral engagement and operational cooperation among the security forces of India, Japan and Australia. The India-Australia political and security partnership has improved in recent years but remains weaker than the India-Japan partnership. An Asian security network with spoke-to-spoke connections between U.S. treaty allies as well as new regional partners, such as India, would buttress regional security.

As the United States forges ahead in deepening its strategic partnership with India, it must understand the intangible factors informing Indian thinking on foreign policy—especially the factor which has influenced it from India’s independence in 1947 to the emerging India today. Those factors include the cultural characteristics of India, which make nonalignment and strategic autonomy not only pragmatic foreign policies for India, but also ones that are a natural fit for India’s national psyche.

India’s nonviolent independence struggle was rare among colonies, so it should not be surprising that its foreign policy is different from Western nations and other emerging nations. The United States should understand Indian perspectives and its civilizational ethos which influence its foreign policy. It needs to manage high expectations from within the U.S. government and business community regarding short-­term or medium-term benefits because India is the quintessential long game strategic play.

India experts, including many Indians, employ traditional international relations concepts such as realism and liberalism to capture Indian foreign policy and behavior, while discounting India’s indigenous thinking, which is a primarily Gandhian thought process associated with the peace-studies theory. Peace-studies theory focuses on nonviolence, equality and working together for the collective good. As noted previously, Gandhian views permeated Nehru’s thinking when he formulated India’s foreign policy. Nehru sought to apply Gandhian views on nonviolence and on the interconnectivity of actions to international politics. Gandhian thought continues to pervade Modi’s foreign policy through his emphasis on engagement and soft diplomacy. The principle of nonviolence, on which Indian foreign policy was built, continues to influence it.

Mir Sadat, PhD, is a naval officer currently assigned to the Chief of Naval Operations. He has over two decades of experiences dealing in Middle East/South Asia geostrategic topics. His opinions are his own and do not reflect the official policy or position of the U.S. Navy, U.S. government or any of its departments or agencies.