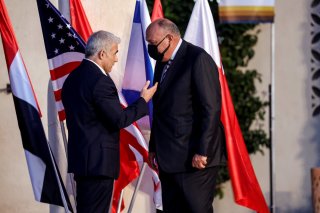 At the end of August, reports emerged in Hebrew media that Ronen Bar, the director of Israel’s Shin Bet domestic intelligence agency had traveled to Egypt for a meeting with his counterpart, Abbas Kamel, the head of the Egyptian General Intelligence Directorate.

The purpose of the meeting was reportedly to overcome a crisis in bilateral relations following the end of the three-day Israel Defense Forces (IDF) Operation Breaking Dawn against Palestinian Islamic Jihad (PIJ) in Gaza.

The diplomatic tensions stemmed from the IDF’s continued actions against PIJ operatives in the West Bank, contrary to the Egyptian belief that under the ceasefire they had brokered between Israel and PIJ to end Operation Breaking Dawn, the IDF would ease military pressure on the terror organization in the territories. The Egyptians also demanded the release of PIJ prisoners to consolidate the truce.

But Israel did not release the prisoners, and increased pressure on PIJ, acting contrary to Egyptian expectations. Immediately after the operation, Israel conducted a series of arrests of PIJ members in the West Bank, during which several Palestinians were killed in clashes with the IDF in Nablus.

Egypt acted as the key intermediary to bring about the truce after three days of conflict, and Cairo perceived these developments as an affront.

Signs of tension were visible when Kamel canceled a planned trip to Israel after the Gaza operation. Political and security sources assessed that this was a mid-level crisis that would not be difficult to resolve.

During talks with Egyptian President Abdel Fattah al-Sisi, Israeli Prime Minister Yair Lapid said that “Egypt has a most significant role to play in preserving the stability of regional security.” This statement reflects an important fact: recently, Egypt has been practically the only political element that can act as an intermediary and is able to secure ceasefires between Hamas, as well as other armed organizations in the Gaza Strip, and Israel.

It is clear that the reason Egypt took offense was Israel’s lack of cooperation with its understanding of the ceasefire agreement. Cairo saw this as a blow to Egypt’s honor and status, in line with Egypt’s self-perception in the region and its important role in Gaza.

For many years, Egypt has invested greatly in preserving its status as the leading power in the Arab world—a role Turkey has attempted to infringe upon in recent years with varying degrees of success. After some erosion, Egypt has begun to recover its predominance. This recovery is mainly attributable to Sisi’s calm and moderate leadership.

Egypt also perceives itself as a state able to resolve regional issues, including the never-ending confrontation between Israel and Gazan terror factions, primarily Hamas and PIJ.

Cairo is keen on preserving this role, and to that end, it regularly dispatches intelligence delegations to Gaza, Tel Aviv, and Jerusalem.

Israeli and Egyptian intelligence communities enjoy excellent relations, both at the personal and professional levels.

Egypt also regards good ties with Israel as critical for ensuring proper relations with the United States and the West, particularly after being greatly disappointed in its history of dealings with the Soviet Union.

All of these factors have helped propel Egypt to the forefront of the region, a position it wishes to maintain.

It seeks to do this despite its conflict with Hamas’s Egyptian sister movement, the Muslim Brotherhood, which has harmed state security. In order to avoid inflaming clear tensions with Hamas, Egypt busies itself with dealing with political and diplomatic issues and stays clear of theological disputes with Gaza’s rulers.

Egypt is wary of Islamist forces, and combats extreme Islamic terrorists in Sinai on a non-stop basis, including losing many members of its security forces in the fight against ISIS in recent years.

A History of Intelligence Diplomacy

The dispatch of Israeli intelligence chiefs to defuse diplomatic tensions has a good precedent.

In the past, heads of the Shin Bet also set out for political missions to resolve crises with states and organizations. But this was usually done covertly and did not attract headlines. Conditions have changed, however, and the journey of a Shin Bet chief today attracts both media coverage and analysis.

Meetings between intelligence chiefs are routine and acceptable worldwide. Often, government cabinets feel that the head of an intelligence agency is optimally positioned to carry out diplomatic missions, and, as such, entrust them with confidence and credibility.

Intelligence cooperation brings states together, and requires a high degree of trust and intimacy. Hence, both sides often trust the “messengers” more than the average politician. Intelligence chiefs are apolitical figures, despite being appointed by the highest political echelons. They enable unique and very close relations between intelligence services.

When a government sends the head of an intelligence agency to handle what appears to be a diplomatic-political issue, it is sending a figure that is often free of political baggage. This approach has proven itself over time. For example, when Israel was able to patch up relations with Jordan following the botched assassination attempt of senior Hamas member Khaled Mashaal on Jordanian territory, and ongoing contacts between Israeli intelligence chiefs and Palestinian Authority President Mahmoud Abbas. Similarly, intelligence diplomacy played a central role in growing relationships between Israel and Gulf Arab governments prior to the signing of the 2020 Abraham Accords. Whole foundations for relations were founded on contacts between the states’ intelligence agencies. Each agency received instructions and guidance from the highest levels of government during such contacts.

Ultimately, the Egyptian-Israeli diplomatic affair appears to be of mediocre severity, neither very serious nor trivial. It is not difficult to overcome such an issue, and it seems likely that bilateral relations between the two state systems will continue without harm.

Yaakov Peri is a publishing expert with The MirYam Institute. He concluded his distinguished career as Director of the Shin Bet (Israel Security Service). He served in that position from 1988-1995.