How Iran Dominates the Middle East 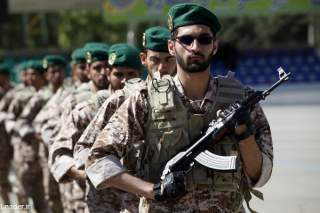 With deadline day for nuclear negotiations between Iran and six world powers less than three weeks away, supporters and detractors alike are gearing up to make their final stand. One line of argument increasingly used by opponents of a deal is the belief that sanctions relief—worth up to $150 billion, according to President Obama’s recent interview with Jeff Goldberg—will fuel Iran’s already extensive involvement in the various conflicts wracking the Middle East.

The argument is certainly convincing—$150 billion can buy a lot of weapons and influence—but it is also misleading and demonstrates a dangerous misunderstanding of why Iranian influence has grown so dramatically over the years.

To begin to understand Iran’s rise as a regional power, it is important to examine the mechanisms with which the country wins friends and influences people.

At the core of Iran’s strategy is its revolutionary ideology, or what it terms Islamic Resistance—the belief that it is leading an existential fight against the forces of imperialism and religious extremism. Iran has manicured an image of resistance and independence that transcends ethnic divides and resonates with popular anti-U.S., anti-Zionist, and anti-extremist attitudes in the region. Despite taking a reputational hit due to the increasingly sectarian nature of the regional unrest, Iran remains the most logical ally for the significant numbers of Arabs who despise the United States, distrust the Gulf states, and desperately require arms to fight Sunni extremists.

Coupled with its revolutionary ideology is the fact that Iran has proven incredibly adept at responding to regional crises. Where others have failed, Iran has stepped in with military and political solutions that quickly fill power vacuums and bring relative success to its allies. In Iraq for example, Iran responded immediately to the fall of Mosul by providing unconditional military and logistical support to Baghdad. Iran also assisted in the development of the Popular Mobilisation Forces, the umbrella movement of predominantly Shia militias who now number over 100,000 men and have a string of battlefield successes to their name—a feat that leaves the multibillion dollar, U.S.-trained Iraqi Security Forces struggling to remain relevant.

The sheer pull of Iran’s soft power is in stark contrast to the country’s financial fortunes. Iran has weathered more than three decades of harsh sanctions and international isolation. It was in the midst of the devastating Iran-Iraq war that Iran nurtured Hezbollah in Lebanon, which has become the most formidable non-state actor in the Middle East. In Iraq, Iran’s influence today far outstrips that of the United States, despite the vast differences in resources available to the two of them.

This is not to say that Iran does not spend money. It does, particularly in Syria, where the Assad regime is overstretched and on the back foot. Latest reports suggest that Iran spends up to $6 billion a year on sustaining Assad. What is less discussed, however, is that Iran has also been a net beneficiary from the civil strife in the region, with reports that Iran has received up to $10 billion of payments from Baghdad.

Even if we were to accept that Iran uses its wealth to win influence, the argument that sanctions relief will result in increased Iranian intervention still falls short. Not only does it fail to consider how the Iranian system itself operates, but it also overlooks even the basic strategic nuances of Iran's regional policy.

The money devoted to Iran’s regional foreign policy is managed by the same organisation responsible for executing it, namely the Islamic Revolutionary Guard Corps (IRGC). The IRGC’s control of both revenue sources and strategic decision-making has sheltered Iranian foreign policy from the broader effects of international sanctions, giving the organisation a large level of autonomy to spend funds on foreign operations as it sees fit. Indeed, it is specifically because of sanctions that Iran has had to rely so heavily on the organisation. As President Obama explained to Goldberg: “[W]hat is also true is that the IRGC right now, precisely because of sanctions, in some ways are able to exploit existing restrictions to have a monopoly on what comes in and out of the country, and they’ve got their own revenue sources that they’ve been able to develop, some of which may actually lessen as a consequence of sanctions relief...It is not a mathematical formula whereby [Iranian leaders] get a certain amount of sanctions relief and automatically they’re causing more problems in the neighbourhood.”

More importantly, the low-cost of that strategy has always meant that only rarely would the IRGC need to step outside of its own means to find appropriations. This is another point raised by President Obama: “[In] the discussion with the GCC countries, we pointed out that the biggest vulnerabilities that they have to Iran, and the most effective destabilizing activities of the IRGC and [Iran’s] Quds Force are actually low-cost.”

Not only does the IRGC enjoy autonomy in the funding of its policies, but it also determines trade policies with geopolitically sensitive partners. In Syria, Iran’s economic interests are overseen by the Syrian-Iranian Economic Relations Development Committee. Similarly, the Iran-Iraq Economic Development Committee manages Iran’s economic relations with Iraq. Both bodies are led by Rostam Qasemi, an IRGC member and former chairman of Khatam al-Anbiya, the IRGC’s main economic arm. In the first few months of 2015 alone, Qasemi has paid two visits to Assad in Damascus and signed an MoU to export gas to Iraq’s Kurdistan Regional Government.

Then there’s the question of strategy. With a sudden windfall of cash, the IRGC could certainly double down on its security commitments. But to what end? In Syria, it has assembled a low-cost network of foreign fighters, local regime irregulars, and Syrian minority communities into a web of defensive pockets that protect key urban centres and maintain supply routes to Lebanon. It has also spared the regime from collapse, thereby denying its regional adversaries a total victory. Rebels have nonetheless entrenched their positions, and any military effort to dislodge them from the country would require an almost universally unthinkable amount of capability and will—a commitment that Iran has never expressly articulated.

In Iraq, and increasingly, so it looks, in Yemen too, the IRGC has pursued successful strategies that are both low-cost and effective. Able to achieve its basic goals under the apocryphal strain of sanctions, why would Iran believe that doubling its outflows will seriously improve its regional position? Not to mention the fundamental shift in Iran’s strategic outlook should a nuclear deal come to fruition.

Paradoxically, an influx of sorely needed foreign investment may loosen the IRGC’s grip on certain economic fields. Much of the immediate sanctions relief money will flow into Iran’s Central Bank, whose governor is directly appointed by President Rouhani and has ambitious plans to heal Iran’s strained economy. IRGC companies will face increasing domestic competition too, as their need diminishes in the face of increasing economic liberalisation and foreign investment.

There is no doubt that money plays an important role in Iran’s regional policy. But the argument that sanctions relief will lead to increased Iranian intervention in the region falls flat when considering the facts at hand, beginning with the fact that the IRGC is taking the lead—politically, militarily, and financially—in spearheading Iran’s regional policy. The IRGC’s depth of independent economic means and its role as arbiter of Iranian regional policy have allowed it to exercise spending and strategic authorities. The decades-old Iran sanctions regime hardly challenged this arrangement; a gradual end to that sanctions regime will likewise do little to change Iran’s regional power. If anything, an economic opening may reduce the opportunities at hand for the IRGC to dominate the Iranian economy.