How Iran's Hard-Liners Are Challenging Rouhani (From the Left) 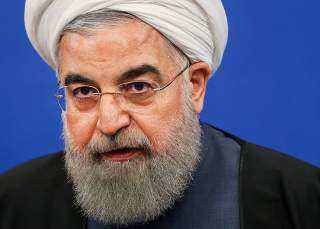 As Iran prepares to vote in its twelfth presidential election, Hassan Rouhani, the current incumbent, is facing decisive opposition to his reelection bid. With Mohammad Baqer Ghalibaf pulling out of the race in favor of Ebrahim Raisi, conservatives are effectively moving towards unity and throwing their weight behind a single candidate—a feat they failed to accomplish four years ago but that is now more important than ever for them, especially with their eyes on the battle over succession to the supreme leader.

Although Rouhani has an incumbent’s advantage, his promised economic revival is seen by many as having fallen short of his stated goals, and he has been the target of unceasing and strong allegations of corruption. Despite the fact that every Iranian president in the post-Khomeini period has served two terms, why is Rouhani in a precarious position? And what are the factors that anti-Rouhani forces are trying to use to their advantage? Recalling the lessons of the 2005 election, which brought Mahmoud Ahmadinejad to power, can serve as a useful model in understanding this year’s contest and the challenges Rouhani faces in maintaining power.

One of the factors that paved the way for the rise of Ahmadinejad and his populist ideology was the fact that the reformists had largely abandoned the economic left, allying instead with Akbar Hashemi Rafsanjani and supporting neoliberal policies and trickle-down economics. This allowed Ahmadinejad to build a platform on state redistribution, economic justice and anti-capitalism that successfully mobilized economically left-leaning voters as he led a sustained attack on elite corruption. His allegations of corruption against the reformists and Rafsanjani were at that time unprecedented in public politics.

Today, conservative criticisms of Rouhani should not be read simply as criticisms of the lack of economic benefits from the Iranian nuclear deal. Rather, conservative messaging builds upon preexisting economic grievances and an acute sense of neglect by Iranians, particularly from the lower and working classes. These grievances can further be galvanized by the extensive IRGC/Basij networks of influence in neighborhoods and mosques, which span the whole country and can mobilize strong numbers. This is while Rouhani himself leads the most economically right-wing administration since the revolution. He built an alliance between segments of the conservative and moderate right, together with the backing of the reformists in a pledge to expand cultural and political freedoms, rather than economic redistribution, which was once a reformist goal. This coalition was forged on attaining relief for economic sanctions and included prominent conservatives, such as parliament speaker Ali Larijani and Ali Akbar Velayati, as well as reformists and moderates.

Rouhani in particular was at the intellectual forefront of Iran’s move to the economic right as head of the Center for Strategic Research, and he has espoused a critical view on minimum wages and labor unions, while general state policy under his administration has been to promote economic development through foreign direct investment rather than state-oriented pro-growth economic policies and government interventionism. In this vein, Ghalibaf’s campaign of the “4 percent” against the “96 percent” (directly borrowed from Occupy Wall Street) and Raisi’s ads targeting the poor and destitute in Iran build on these built-in trends in elite Iranian politics and public perceptions. This palpable absence of economically left-leaning politicians from the moderate camp will remain politically relevant, and continue to rear its head in Iranian elections as a source of intermittent populist blowback.

Consequently, Ghalibaf and Raisi’s campaign advertising—especially their documentaries broadcast on state television—appeals to a broader audience and is stronger than Rouhani’s, in part because their economic discourse of grievance more easily translates into a larger national cause rather than a particular political orientation. It is all the more interesting to note both of their relatively sociopolitically liberal messaging and their unwillingness to present a conservative cultural agenda in contrast to previous elections—a growing trend in Iranian politics. And while Rouhani had a strong performance in the third debate, he may be badly wounded due to the serious corruption allegations made against himself as well as his closest associates, including against his brother and his vice president, Eshaq Jahangiri. Ghalibaf has revealed various allegedly corrupt transactions made by Rouhani and his close associates to the media, in coordination with the debates, in order to tarnish Rouhani.

Smearing Rouhani as a corrupt and “pro-capitalist” elite also parallels 2005, when Ahmadinejad was able to successfully link corruption with economic mismanagement and popular disdain of ruling reformist-moderate politicians, particularly Rafsanjani. Ghalibaf has also made interesting use of Iranians’ historical memory by comparing the Rouhani administration to the Qajar dynasty—a corrupt and inept ruling class in league with Western embassies to push through concessions in Iran that benefit the West and Iranian elites, rather than the nation as a whole. Indirectly, Ghalibaf suggests the nuclear deal with the West was a kind of Qajar-era concession.

Under the surface of the elections, the key issue of succession to the supreme leader is also playing out, especially as Raisi is allegedly being groomed for the position. This is now more evident than ever now that Ghalibaf has withdrawn to support Raisi. The goal is to consolidate anti-Rouhani and disaffected forces (not just conservatives) behind Raisi to clench a surprise victory on Friday; this will bring a joint Raisi-Ghalibaf campaign, including different conservative factions, to the new government if elected. That said, of course, Iranian elections are notoriously uncertain, and it remains to be seen whether Rouhani has managed to restore his image and regain the trust of the struggling classes in the fierce competition.

Payam Mohseni is the Director of the Iran Project and Fellow for Iran Studies at the Harvard Kennedy School Belfer Center for Science and International Affairs. He is also a Lecturer in the Department of Government at Harvard University where he teaches Iranian and Middle East politics.