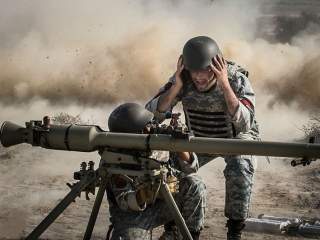 Historically, Iran’s military strategy has been defensive, based on deterring potential rivals, developing restraining leverage over enemies, keeping adversaries pinned down in secondary theaters and undermining the will of potential enemies, while attempting to create influence as well as a defense zone that will provide it with strategic depth beyond its borders. The goal of this essay is to consider whether, as a result of the upheaval in the Middle East, Iran has been drawn into a regional policy with new characteristics, and whether its “strategic toolbox” is appropriate for this new policy.

Over the past two centuries, Iran’s policy and military personality was defensive, reflecting two underlying assumptions: that Iran was a victim of third-party aggression, and that such third parties were stronger than Iran. Iran’s military force is structured with this attitude in mind, built from three constituent parts.

Iran’s regular army, the Artesh, is exceptional in that it is built up primarily as an asymmetric, quasi-guerrilla force. For several years following 2003, its main reference scenario has been an American invasion. Together with the IRGC, the Artesh developed the Mosaic Doctrine of engaging an enemy asymmetrically as a guerrilla force while parts of Iran are under occupation. Naval and air force doctrines are also based on guerrilla rationale, principally revolving around attrition, disrupting enemy operations, and interrupting the enemy’s free use of the sea and skies.

Therefore Iran emphasizes surface-to-surface, -air and -sea missiles, as well as sea mines and small boats, over main battle platforms. There is also a preference for weapons that can be produced in Iran. These facts mean Iran’s military is not optimally built to launch ground offensives against a bordering peer or overseas expeditions. Its army, navy and air force are all designed to combat a better-armed invasion force at home, or in Iran’s “green water,” rather than projecting Iranian power away from home.

The IRGC’s Quds Force (the second constituent part) and other clandestine forces serve as Iran’s covert boots on the ground, and its means of operating clients and proxies. Indeed, the Iranian strategy is to make use of the ethnic groups and substate organizations (the third constituent) that are already present and active in its overseas theaters of interest. Iran gives them comprehensive aid and empowerment, even deploying covert forces to fight alongside them.

Using proxies and covert forces, Iran successfully wore down American willpower to remain within and influence Iraq, while simultaneously acting to destabilize Iraq’s Sunni regime. Iran thus became the most influential actor in Iraq, and prevented it from being used as a springboard against Iran. Iranian covert forces used funding, bribery, intervention in tribal politics, and even kidnapping and assassination to do this. The costs and risks to Iran were low, as it operated via indirect, deniable means, without risking escalation to a direct confrontation with the United States.

Iran uses Hezbollah to blur uncomfortable regional fault lines (Shiite-Sunni and Persian-Arab) by heightening the Muslim-Israeli one. Hezbollah also constitutes a deterrent against Israel, and a means of engaging Israel and wearing it down without direct confrontation. The costs to Iran, both financial and political, of maintaining Hezbollah are far lower than the cost of generating similar effects via a conventional expeditionary force.

Thus, since 1988, Iran has managed to defend its territory and its revolutionary-religious government by dismantling potential threats before they emerged, and without involving itself directly in a major conflict. It has defended its vital interests without incurring significant costs.

Has Something Changed in Iran’s Behavior?

In recent times, not only have the threats on Iran diminished, but a power vacuum has emerged around it: the USSR collapsed and new, mostly Muslim, states now buffer between Iran and Russia; European powers significantly reduced their regional footprint; contemporary Turkey is not as threatening as the Ottoman Empire, and is somewhat directionless; Sunni rule in Iraq was toppled, diminishing the threat of a pan-Arab or pan-Sunni front; the United States withdrew from Iraq and is withdrawing from Afghanistan, Iran’s eastern and western neighbors respectively, and thereafter seems reluctant to engage in additional armed conflicts; and Afghan Pashtuns are currently not in a position to pose a threat, a position likely to remain out of reach for the foreseeable future.

Probably without a conscious revision of its national objectives, policy and strategy, Iran is drawn into the resulting power vacuum. Iranian bids for hegemony are now active in Syria, Iraq, Lebanon and Yemen. Its footprint can also be found in Eritrea, Gaza, Bahrain and Shiite regions of eastern Saudi Arabia, as well as in Central Asia and the Caucasus. Indeed, Iran is gradually drifting into hegemony competition with major regional powers over footholds and clients.

Furthermore, the JCPOA is expected to provide Iran with tens of billions of dollars, which will allow it to further fund its strategic efforts. In the JCPOA, the West has essentially recognized Iran’s previously unacceptable nuclear program as legitimate. The JCPOA’s financial dividend, newfound international legitimacy and remaining nuclear program further empower Iran with a broader freedom of action.

But all of this marks a break from Iran’s traditional strategy. With its growing footprint in multiple theaters, Iran has managed to alienate and antagonize most regional powers, and with its exploitation of substate actors within the Arab world, Iran is unearthing deep primal Arab fears. Consequently, the unexpected outcome of Iran’s current policies is a new coalition of its own making: one of many regional players opposed to Iran.

Further, the Iranian armed echelons are, as detailed above, not optimally structured to enable and sustain such changing policies. Iran’s synchronization challenges between current policies and its legacy military toolbox are evident in its protracted engagements in Iraq, Syria and Yemen, in which Iran has failed to deliver timely and decisive end states. Iran committed its proxy militias to large-formation ground combat in Iraq, and has even dispatched its air force to carry out strikes. These endeavors are far from Iran’s legacy core competence, and have so far delivered unimpressive results. Iran has committed Hezbollah, the Quds Force and other Shiite elements to large-formation battles in Syria’s cities, yet has been unable to end the conflict, and the long-standing power vacuum opened the door for Russian intervention (which may still turn against Iran’s interests).

Iran nearly made a mistake in Yemen, dispatching its navy for a hegemon-like offshore force projection, only to turn its vessels around as other navies also headed to the theatre. Indeed, its navy is less effective in securing access to Yemen, and Iran finds it challenging to establish robust, continuous supply lines to the Houthis. Not surprisingly, the Houthis’ offensive is being rolled back, and they may be coerced to negotiate.

Victim of its Own Strategic Drift

However, Iran is an intelligent and calculated actor, and may adapt its way out of this lack of synchronicity. It could reassess its own policies or it could restructure its armed forces. Each of these courses of action represents an opportunity for Iran’s rivals. The advantages of an Iranian withdrawal from its current policies are self-evident, yet there are also advantages should Iran choose to engage in force restructuring (the buildup of hegemon-like conventional forces): it will probably need to increase its reliance on foreign sources for procurement, invest heavily in long-term processes, and bring itself nearer to the parts of the military envelope in which Israel and the United States benefit from a traditional competitive advantage.

Meanwhile, while Iran is somewhat off-balance—perusing a set of new ends that its legacy ways and means find challenging to sustain—the newly formed coalition of Iran’s regional adversaries takes advantage of its declining strategic effectiveness. Saudi Arabia, for example, is ahead of Iran in the competition in Yemen, and has reversed roles in Syria, giving Iran a taste of its own medicine: the Saudis are successfully using low-cost deniable proxies to attrite the Shiite-Alawite coalition in Syria. Iran’s rivals will next be able to indirectly engage Iran in additional secondary theaters, raising the price Iran pays for its regional endeavors and lessening its freedom of action.

Yoel Guzansky is a research fellow at the Institute for National Security Studies at Tel Aviv University. Ron Tira is a businessman and a reservist in the Israeli Air Force’s Campaign Planning Department.