How to ISIS-Proof a Muslim-Majority State 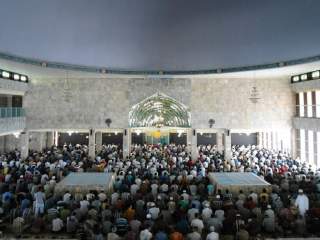 In January, a small group of ISIS-affiliated terrorists killed four people in a suicide bombing and gun attack in Jakarta, Indonesia. After the assault, Jakarta’s police chief explained why ISIS fighters hate Indonesia: “they perceive Indonesia as not Dawla Islamiya, not an Islamic country.” Indonesia’s striking success as a broadly secular, Muslim-majority democracy not only riles Islamic extremists but contradicts the persistent conventional wisdom that democracy and Islam are incompatible. How has Indonesia’s democracy flourished, and what can we learn from it?

Prominent historian Bernard Lewis has famously argued the Muslim world’s democratic deficiency is inherent to Islam, which lacks Christianity’s call to "render. . . unto Caesar the things which are Caesar's and unto God the things which are God's." In short, Christians have a scriptural foundation for secular governance that Muslims lack. Yet Indonesia challenges this simplistic and deterministic claim. In 2014, the world’s most populous Muslim country, with nearly 90 percent of its 250 million citizens practicing Islam, held its fourth free and fair presidential election in the post-authoritarian era. While international leaders have extolled Indonesia’s success, few have examined exactly why Islamist politics have failed there. This is an important omission, as Indonesia’s election laws and constitutional structure present important lessons for how to design democracy in a diverse, conflict-prone Muslim-majority society.

Indonesia and the Middle East’s nations share many similarities. Indonesia has politically and socially significant religious minority communities alongside a Muslim majority, which is divided doctrinally between secular and orthodox interpretations of the Quran, and divided politically between secularism and political Islam. Additionally, Indonesia endured European colonialism and decades of secular authoritarian rule that co-opted and oppressed Islamist resistance. The fall of the dictator Suharto in 1998 precipitated widespread ethnic and religious violence, prompting some observers to predict the country would go the way of the Balkans. Yet amid the chaos of the immediate post-Suharto period, Indonesia held its first free and fair election in over forty years, reformed its democratic institutions and pacified secessionist demands. There are three core reasons for this success.

First, Indonesia had a history of secularism and democracy that it brought into its postauthoritarian period. Indonesia’s anticolonial movement against the Dutch was led by Sukarno, a man dedicated to a secular, multiethnic and multireligious state. He espoused a national ideology called Pancasila, which advocated both belief in God and democracy, that profoundly shaped Indonesia’s political culture. After he ascended to the presidency in Indonesia’s first parliamentary election in 1955, Sukarno become increasingly authoritarian and was ultimately overthrown in 1967 by Suharto, who would lead Indonesia for four decades. Nevertheless, this initial experience with free and fair elections and secular politics formed an important precedent for the reemergence of democracy decades later.

Second, after Suharto’s fall, constitutional designers reformed Indonesia’s election rules to include strong incentives for centrist politics. Parties have to pass a relatively large minimum vote threshold for entry into the parliament. They must also open headquarters in all provinces in order to register and compete in elections. And for presidential elections, successful candidates are required to win the national vote as well as surpass a minimum vote threshold in half the provinces. These provisions and others require parties to establish a national character before and during elections and to eschew broad, divisive ethnic or religious appeals.

Third, Indonesia radically decentralized its political power. Previously one of the most centralized governments in the world, the post-Suharto government moved substantial powers to the subnational level. This expanded the role of local ethnic and religious groups in governing their own affairs, which reduced grievances against the central government in Jakarta. The restive province of Aceh, where Islamist rebels long fought the government, received special accommodations that exempted local parties from rigorous party rules. This, among other factors, placated secessionist demands and has created stability in a province long roiled by violence.

Skeptics argue that Indonesia’s unique political history undermine its relevance to the Middle East or that Indonesia’s continued religious strife make it unworthy of emulation. Despite its lack of democracy, the Suharto period featured enlightened economic rule that fostered economic growth and undermined support for radical Islamist movements. This is quite different from Mubarak’s or Ben Ali’s economically disastrous rule in Egypt and Tunisia, respectively. Additionally, Indonesia is not without significant problems. Local minorities, including Christians and Ahmadiyyah Muslims, are frequently attacked; laws inspired by Islam, such as one banning pornography, evoke dissent from secular Indonesians.

Undoubtedly, Indonesia possesses unique historical features—such as its early experience with democracy, secular founding fathers and developmental authoritarianism—that facilitated its transition from dictatorship to democracy. However, Indonesia’s success has as much to do with its institutional design as with its history. Its election laws and decentralized power structure placate local demands and create a strong incentive for moderate and inclusive politics. The fact that ISIS targets the Indonesian state is all the more reason to emulate it. The Middle East’s struggling democracies would be wise to consider Indonesia’s example.

Geoffrey Macdonald is a non-resident fellow with the Center for the National Interest.