How Israel Ignored Its Most Valuable Spy 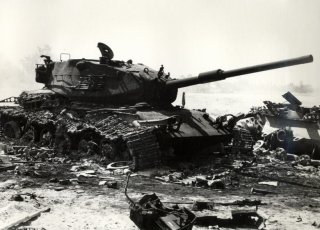 He was the best spy ever recruited by the Mossad. Too bad the Israelis didn’t listen to him. Even worse, the quarrel over why the spy was ignored inside Israel led to his death. But the Israelis were not his only clients; this asset also sold his services to Saudi Arabia.

Ashraf Marwan was the son-in-law of Egypt’s President Gamal Abdel Nasser. He became a crucial adviser to Nasser’s successor Anwar el-Sadat. In 1970 he called the Israeli embassy in London and offered to work for the Israeli intelligence service. The Mossad ran him as its best asset ever, with then head of the service Zvi Zamir often meeting him face-to-face to debrief him.

A new book by veteran Israeli intelligence expert Uri Bar-Joseph tells the story of the Angel, Marwan’s code name, in detail. This is a tale of espionage at the highest level. The Angel provided Israel with Egypt’s entire order of battle for its armed forces and Egypt’s war plans for attacking Israel across the Suez Canal. He provided details of Sadat’s meetings with the Soviet leaders and up-to-the-minute reports on Soviet arms deliveries to Cairo.

But the Israeli military intelligence experts in the Directorate of Military Intelligence, which was solely responsible for producing the national intelligence estimates on whether Egypt would go to war, were convinced Sadat would not take the risk. The DMI had a concept of war planning. In the concept, Egypt could not beat Israel because of Israel’s overwhelming air superiority, which Egypt’s leaders knew made war suicidal. Thus Sadat wouldn’t attack.

But the Angel reported in 1972 that Sadat believed he had no choice but to go to war because Israel was blocking every avenue for diplomacy. Moreover, Sadat was planning a limited war to break the stalemate, not a full scale conflict. The concept was irrelevant.

Then, in August 1973, Marwan told Zamir that Sadat had traveled to Saudi Arabia to meet with King Faisal. Sadat told Faisal, in a meeting with only Sadat, Faisal and Marwan in the room, that he would attack Israel with Syria that fall. Faisal promised Sadat that the kingdom would impose an oil embargo on America if it resupplied Israel. The oil embargo was the Arabs’ ultimate weapon.

It was also America’s nightmare. According to this account, the Israelis shared the substance of the Angel’s reports with the Nixon administration. Apparently Secretary of State Henry Kissinger ignored the warning that the oil weapon was being readied for use. Other reports have shown it wasn’t the only warning Kissinger ignored.

Meanwhile, the Israeli generals refused to abandon their concept. When war clouds gathered in October 1973, the DMI insisted that there was nothing to worry about. They convinced Defense Minister Moshe Dayan that war was not imminent. Even when the Russians began an urgent mass evacuation of their civilian advisers from Egypt and Syria, DMI chief Eli Zeira said that there was no reason to expect war.

The day before Sadat attacked, the Angel urgently summoned Zamir to London, to tell him the attack was coming on October 6, 1973, Yom Kippur in Israel. Only the next morning did Israel begin to mobilize. If the army had listened to Marwan in the months before October, it would have been far better prepared. As it was the last minute, the warning from London probably saved Israel from losing the Golan Heights and an even worse disaster than what actually happened to the country.

Why did he do it? Why would a twenty-nine-year-old Egyptian in 1973, married to the daughter of his country’s greatest hero, betray his country to its great foe? Money was part of the story. The Mossad paid him over a million dollars, helping Marwan become a very rich man. Ego was a part, too. As the Angel, Marwan was the central player in the world’s most dangerous conflict. And he enjoyed the thrill of it all.

Bar-Joseph’s captivating account also makes clear that the Mossad was not alone in paying Marwan. The Saudi intelligence service saw him as a useful agent of influence in Cairo. Faisal’s intelligence chief and son-in-law, Kamal Adham, probably paid Marwan even more than the Mossad in lucrative contracts and other deals. His presence at the crucial August summit was a reflection of Saudi Arabia’s confidence in Ashraf Marwan. They, of course, had no idea he was an Israeli agent. But the Israelis had an asset with access to the royal family, a significant coup.

After the war, the Israeli spy agencies engaged in another war over who should be blamed for the debacle of the warning failure in October 1973. If wars between spies are deadly, the wars between ex-spies over the blame game are even more deadly. Zeira desperately tried to smear the Angel as a clever double agent in his retirement, to absolve the DMI of its gross negligence. Gradually, he released details about the Mossad’s greatest agent to the media, which would point the finger at Ashraf Marwan. Zamir even tried to stop him from going to court.

By 2007 it was too late. Marwan fell, or was pushed, to his death from the balcony of his London home. The investigation by Scotland Yard was perfunctory. They concluded it was either suicide or murder by sources unknown.

For the Mossad, the unveiling of the organization’s best-ever source by a fellow Israeli intelligence officer is a disaster that won’t go away. Any future potential walk-in will have to think long and hard about whether the Mossad can keep a secret.

The Angel: The Egyptian Spy Who Saved Israel was published by HarperCollins this year.

Image: A knocked-out Israeli M60 tank amongst the debris of other armor during the Yom Kippur War. Wikimedia Commons/Public domain