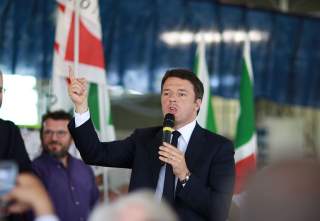 First it was Brexit, then Donald Trump, followed by French president François Hollande announcing he would not run for reelection (an admission of defeat), and now Italy’s Matteo Renzi resigning as prime minister in the wake of the “No” victory in the constitutional referendum he had proposed. The overwhelming force behind these political outcomes is populist revolt against established parties and leaders.

Italians did not vote on the merits of the constitutional reforms proposed by Renzi, which were abstruse and bureaucratic. They simply seized the opportunity to sweep him from power. Behind the “No” vote was a motley crew whose most visible leader was Beppe Grillo, the antiestablishment, antibusiness, anti-European former comedian whose Five Star Movement has become the most popular party. A broad spectrum of currents of opinion, ranging from the extreme left to the extreme right, also supported the “No” vote.

It is not yet clear whether elections will be held soon, given that there are two electoral laws competing against each other—the one passed by the House in 2015 and the old one, still alive in the Senate, since the rules governing the composition of that parliamentary body were part of the reform package on the ballot Sunday​, November 4​.

Now the traditional parties, who hate each other but fear that new elections will give the Five Star Movement a clear victory, will try to patch together a new electoral law designed to preempt that danger by making it virtually impossible to have a one-party government. They might decide that proportional representation is the way to do that—forgetting it was one of the reasons why Italian administrations were so chaotic and indecisive for decades.

And herein lies the great danger for Italy and many European countries in the wake of populism’s threat: the entrenchment of old-system politics, that is, cronyism and the tax-and-spend, entitlement-ridden welfare state as the only alternative to the antidemocratic, anti-European, protectionist right or left. It would be a tragedy, since old-system politics is precisely what generated the conditions for the rise of populism in the first place; Italy’s economy has hardly grown at all since it joined the eurozone in 1999!

One way to gauge the gravity of what is happening in Italy and anticipate the kinds of developments that might continue to fuel the populist revolt is to look at the banking system, which is on the verge of collapse. Nonperforming loans, amounting to some 360 billion euros, now comprise one in five of all outstanding loans, a proportion ten times higher than in the United States and four times higher than that in France, where loans that are ninety days past due are already too large.

The symbol of this financial disaster in the making is Banca Monte dei Paschi di Siena, the oldest bank in the world, which, despite having been rescued by taxpayers twice and benefited from a government ban against short selling, has lost 99 percent of its worth in the stock market. It is now trying to raise capital to the tune of 5 billion euros, while its market capitalization is only 547 million. Good luck with that! It would have been almost impossible without the “No” vote. After the referendum, it is the stuff of la-la land, not real life.

Unless Italian and European leaders understand that decades of mediocre management and the almost total absence of meaningful reform are the real cause of populism’s rise, their attempts to cling to the old system will only accelerate their own demise. Such an outcome, given the kinds of leaders and parties leading the populist revolt, is downright scary.

Alvaro Vargas Llosa is a Senior Fellow at the Independent Institute. His latest book is Global Crossings: Immigration, Civilization and America.