How Japan's Nationalization Move in the East China Sea Shaped the U.S. Rebalance 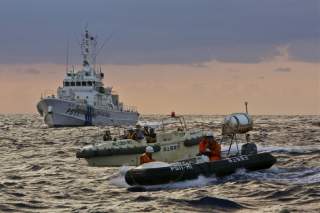 When President Obama heads to Beijing next month for a summit of the Asia-Pacific Economic Cooperation (APEC), it will be an opportunity to take stock of the “rebalance”: to measure its impact on the region and the success of its objectives. Three years after Obama first announced the strategic shift in American military, economic and diplomatic resources (“the Pivot”) in 2011, the results are something of a mixed bag. The United States has enhanced military partnerships while outlining plans for bolstering its military presence in the region, yet on the economic front, Trans-Pacific Partnership (TPP) talks drag on with tenuous prospects. Diplomatically, the Pew Research Center on one hand reports a plurality of respondents in every Asian country polled except Pakistan, Malaysia and China view the United States as its greatest ally. On the other hand, pluralities in these three are joined by Indonesia in viewing the United States as their nations’ greatest threat.

For the Chinese press, however, the fix is in. As Xinhua noted in August, thanks to the American rebalance, the neighborhood has “lost its tranquility” by emboldening partners to take a hard stance towards China. Yet this narrative ignores not only the role that China’s unilateral actions and bellicose talk have had in sending neighbors in the South China Sea scrambling for naval upgrades, but also discounts how a momentous series of decisions in the East China Sea has impacted regional dynamics. In September 2012, Japan’s national government announced that it had agreed to purchase three of the five disputed Senkaku islands (known to mainland China as Diaoyutai; Taiwan as Tiaoyutai) from their private Japanese owner. The Japanese decision to nationalize these islands and the Chinese decision to confront Japan over the action have perhaps done more to shape the rebalance and the success of its implementation than any other actions.

Much about the decisions remains a matter of conjecture. When Japan sparked the crisis through its purchase on September 11, 2012, it did so ostensibly to preempt the governor of the Tokyo Metropolitan Government, ultranationalist Shintaro Ishihara, from himself purchasing the islands. Ishihara had declared his intention to do so months earlier in April 2012 and would likely have built structures on the Senkakus explicitly to provoke China. Reinhard Drifte’s extensive examination in the Asia-Pacific Journal of the incident describes the Japanese decision-making process as driven by the belief that they were choosing between the lesser of two evils and then attempting to convince China of this view. Whether or not Japan believed it had succeeded in doing so, Drifte notes that a delay in the deal with Ishihara after his private survey of the islands on September 2 created the opening for the central government to purchase them instead.

Much about Japan’s decision indicates communication failures. Subsequent comments by Japanese officials imply Prime Minister Yoshihiko Noda’s government was surprised by the Chinese response, and former U.S. Assistant Secretary for East Asian and Pacific Affairs Kurt Campbell said in a 2013 interview “Even though [the United States] warned Japan, Japan decided to go in a different direction, and they thought they had gained the support of China, or some did, which we were certain that they had not.”

Did the United States know Japan would purchase the islands? Perhaps not imminently, but by September 2012, it should have been clear that one of the “two evils” would occur. This is all the more readily apparent when one considers that the most important question—whether Japan could have prevented Ishihara’s purchase of the islands through some other, less incendiary means—is strangely never asked, but often assumed by those who have subsequently criticized the decision. If there was a third option it is not now readily discussed, and was likely not then obvious.[1] This is an excellent example of the need for creativity in diplomacy and government, but it seems time and energy were spent elsewhere once Noda’s circle believed it had found a palatable option.

Unfortunately for Japan, the timing of its decision solidified its unpalatability. Hu Jintao, in the midst of a leadership transition, was reportedly, in August 2012, confronted by the party’s future leaders demanding he take a stronger position on the dispute, and only two days before the Japanese announcement, briefly met with Noda at that year’s APEC summit. Because it is assumed Hu and Noda talked about the Senkakus, analysts believe Hu lost face by the announcement. Hong Kong activists landing on the Senkakus in August 2012 were followed within days by Japanese activists. But the latter were seen by the Chinese to be more hospitably treated in their eviction as—unlike the former—they were not “illegally” arrested by the Japanese Coast Guard, thereby prompting riots in China. To top off the timing muddle, mid-September is a time of anniversaries condemning Imperial Japan’s aggression, such as the anniversary of the Mukden incident.

To be sure, the nationalization was not the first row between China and Japan over the islands. The 2010 ramming of Japanese Coast Guard vessels by a Chinese fishing boat and the captain’s subsequent arrest sparked a diplomatic stand-off that ended only with his release. However, unlike such previous incidents, and very likely because of the political damage done to the Japanese government from that perceived capitulation, there was no willingness this time on the Japanese side to make concessions in the wake of the Chinese backlash. Japan acted, China chose to react, and neither side chose to back down. As Drifte puts it, “Both sides made it impossible with their extreme and diametrically opposed positions to find a compromise.”

These decisions have had far-reaching impacts on the United States’ rebalance initiatives, and on the rebalance goal of fostering a stable region. Most immediately, the resultant Japanese-Chinese hostility “definitely helped improve U.S.-Japan ties,” notes a longtime China analyst. Prior to the East China Seas issues, ties were “trending a bit negative,” with previous prime minister Yukio Hatoyama going so far as to advocate for what was seen by many as a loosening of the alliance, as well as calling in 2009 for an “East Asian Community” that excluded the United States. The subsequent 2010 fishing boat incident and undiminished enmity with China after the 2012 nationalization convinced Japanese leaders of the importance of repairing security ties with America.

Such thinking coincided with the return to power of nationalist prime minister Shinzo Abe in December 2012, who has pushed through “significant” increases in naval spending—including for a Japanese “Marine Corps” able to retake Chinese-captured islands, a new defense export framework, structural reforms of Japan’s national-security apparatus, and most recently a controversial reinterpretation of the constitution to allow Japanese forces to come to the aid of allies under attack in limited circumstances—the right of collective self-defense. Meanwhile, James Holmes points out the operational experience borne of countering the hundreds of Chinese incursions into the waters and airspace around the disputed islands has strengthened the Japanese Maritime Self-Defense Force’s proficiency.

The decisions in the East China Sea also impacted Asia more broadly by spurring Japan’s enlistment as a full-fledged partner in the rebalance in order to create strategic depth and also look for economic partners. Zachary Keck says China’s refusal to back down over the Senkakus and the dispute’s intensification increased Japan’s “willingness to cooperate with the U.S. outside its immediate area, and led it to enhance its own diplomacy and military cooperation with powers outside of Northeast Asia. Nowhere was this more the case than in Southeast Asia. One of the biggest stories of 2013 was Japan’s reemergence in Southeast Asia, with Abe’s concern over China as the driver”—sentiments echoed by the China analyst with whom I spoke.

American initiatives to gain and maintain relationships and military access in Southeast Asia are of particular importance for the rebalance, as the strategy relies not just on rebalancing resources from other theaters to Asia, but also within Asia. In his new book about the strategic competition in Asia, Fire on the Water, Robert Haddick notes the historic “basing geography” of the region, namely that “the congealing of U.S. military power in bases in the north-west corner of the Pacific” has generated part of the “strategic problems policymakers and commanders now face” and are trying to overcome. U.S. efforts to break through such limitations include new military presence agreements with Australia, the Philippines and Singapore, as well as overtures for closer cooperation with many others in the region.

With Japan on board, the United States found an ally particularly suited to its efforts to build partnership capacity in the South China Sea. “During his first year in office,” says Keck, “Abe personally visited every single ASEAN nation,” and Japan began an era of patrol boat diplomacy, with agreements for their sale to Vietnam and the Philippines, and reports of a deal with China-backed Sri Lanka to the west. There are also indications that the United States and Japan want to develop a framework for greater surveillance and information-sharing among South China Sea states, although what shape this would take is unclear. Additionally, the new export rules made possible deals with China-skeptic powers along Asia’s periphery, currently in various stages of negotiation: submarines to Australia and amphibious US-2 military aircraft to India.