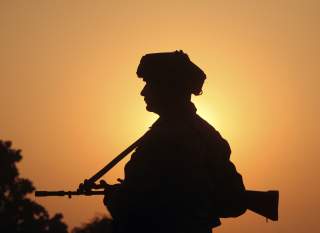 On February 15, after chairing a top-level meeting of his cabinet’s Security Committee, Indian prime minister Narendra Modi declared, “I want to tell the terrorists and their backers... they have made a big mistake. You will have to pay a very heavy price . . . I assure everyone that the forces behind the attack... we will bring them to justice.” This declaration came after the February 14 suicide bomber attack on a convoy of vehicles carrying 2,500 Indian security personnel on the Jammu-Srinagar National Highway in the Pulwama district in southern Kashmir.

The attack resulted in the death of over forty Central Reserve Police Force (CRPF) personnel. The Pakistan-based Islamist militant group Jaish-e-Mohammed (JeM), which has very close ties with Pakistan’s Inter-Services Intelligence (ISI) and often acts as its surrogate in the context of the ongoing unrest and terrorism in Indian-administered Kashmir, immediately claimed responsibility for the terrorist operation.

It quickly became clear that the claim was true for several reasons. First, the meticulous planning and execution of the attack bore the hallmark of professionalism beyond the capacity of homegrown Kashmiri terrorist groups to master. Second, a complex support network was needed to acquire the large amount of explosive material used to detonate the car bomb—again something beyond the capacity of local groups without being discovered by the Indian security apparatus. Third, the JeM’s involvement was clearly established when four days after the Pulwama attack Indian security forces encircled and killed in the same area a senior Jaish commander who had been infiltrated into Kashmir from Pakistan to organize the operation and recruit the suicide bomber.

That JeM is a front organization of the Pakistan army is evident from the fact that repeated U.S. and Indian efforts to get the UN Security Council to declare its founder, Masood Azhar, a global terrorist, were blocked by China at the Pakistan government’s behest. Pakistani involvement in the attack must, therefore, be taken as a given despite denials by high-ranking Pakistani officials that this is not the case.

While the ISI may temporarily revel in its success, this time the Pakistani military brass has overreached and have provided India the justification for major retaliatory measures. That such retaliation, which could escalate into a full-fledged war, is only a matter of time is borne out by the confluence of various trends and events in India and the region.

First, the Pakistani leadership seems to have been emboldened by the Trump administration’s announcement that it will soon withdraw troops from Afghanistan thus clearing the way for the Pakistan-supported Taliban to regain much of the power it lost in 2001. This appears to have bolstered the Pakistan army’s resolve to intensify terrorist attacks by its surrogates on Indian military targets on the assumption that a friendly government in Afghanistan will provide strategic depth to Pakistan in case of a military confrontation with India.

Second, the Trump administration’s decision to once again use Pakistan as a conduit to bring the Taliban to the negotiating table has convinced Pakistan that the United States will not adopt any harsh measures to punish continued terrorist attacks against Indian forces in Kashmir. This assumption is based on the calculation that Washington desperately needs Islamabad in order to extract itself from the Afghanistan quagmire.

Third, the atmosphere in India has turned highly jingoistic following the Pulwama attack, and public anger will not be assuaged without a dramatic retaliatory measure that does substantial damage to Pakistan’s military infrastructure and not merely to the terrorist organizations that it has spawned.

Fourth, elections to India’s parliament are barely two months away and the Hindu nationalist BJP government, which seems to be increasingly losing political ground, would probably like to use the incident to its electoral advantage by a major show of military strength by attacking military targets in Pakistan.

Indian retaliation is inevitable, but its exact form and scope are difficult to predict. New Delhi has already begun to put diplomatic and economic pressure on Pakistan by, among other things, canvassing international opinion against the latter’s support for terrorism. While this may bring verbal backing from most countries, it is unlikely to affect Pakistan in any major fashion. This is because of Chinese and Saudi financial and political support to Islamabad and due to America’s unconcealed dependence on Islamabad to put pressure on the Taliban to allow a smooth and painless American pullout from Afghanistan.

Moreover, diplomatic and economic pressure on Pakistan is unlikely to satisfy public opinion in India and, therefore, military retaliation is very much in the cards. This time the military response is certain to be far more severe than the surgical strikes against terrorist group concentrations in Pakistan-controlled Kashmir that took place after a similar attack on Indian forces in Uri in September 2016 when four assailants attacked an Indian Army brigade headquarters killing nineteen soldiers.

The Pakistani military may have given the green signal for the most recent terrorist operation to go ahead under the impression that possession of nuclear weapons and Pakistan’s clearly expressed refusal to abide by the “no first use” doctrine would deter India from retaliating militarily in any major fashion for fear of escalation to the nuclear level. Such a calculation, it seems, is based on its reading of the earlier pattern of Indian response, most particularly during the Kargil conflict of 1999 when Indian forces were restrained from crossing the international frontier in large part because both countries had openly declared their nuclear weapons status just a year ago.

This could turn out to be a grave miscalculation on Pakistan’s part. Given the insistent domestic demand for credible retaliation and with elections around the corner the Indian response to the Pulwama attack is most likely to target Pakistan army installations in addition to terrorist group concentrations. This would force Pakistan to counter-retaliate to save the honor and credibility of its military, the real power behind the throne, in the eyes of the Pakistani public. Such an action-reaction dynamic could lead to a very combustible situation that may slide out of either party’s control.

What makes the situation very dangerous is that while both countries are nuclear powers, there is a marked imbalance in their conventional military capacity that is tilted in India’s favor. This is the major reason why Pakistan has refused to subscribe to the “no first use” nuclear doctrine thus introducing great uncertainty into the India-Pakistan conflict. Furthermore, unlike in India, nuclear weapons and delivery systems in Pakistan are under the control of the military top brass and the civilian government does not have any say on when and how they will be used.

This projected action-reaction dynamic can easily graduate to the nuclear level if Pakistan decides to take recourse to tactical nuclear weapons, which it has stockpiled, if it finds itself unable to withstand India’s conventional power. Once this happens, it is difficult to predict where the escalatory process will end.

That is why the Pakistani military establishment must realize that spawning and aiding terrorist groups in Pakistan and Pakistan-occupied Kashmir, infiltrating terrorists into Kashmir, and motivating and training local Kashmiri youth to undertake terrorism should not be taken lightly in a nuclearized environment. The sooner it dawns on the GHQ in Rawalpindi that it is playing with fire that can consume the entire region the better it will be for both countries and for the people of Kashmir whose interests Pakistan claims to hold dear.