How Kim Jong-un Saved the World from North Korea 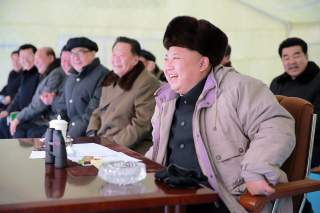 Pyongyang’s successful test of intercontinental ballistic missiles (ICBMs) got the world talking. If and when—with the emphasis on when—the North Koreans develop the capability to couple their more and more powerful missiles with nuclear warheads, Kim Jong-un will be in a position to launch a nuclear strike against the United States.

Kim Jong-un’s recalcitrance and unpredictability would seem to make an ICBM-armed North Korea the stuff of apocalyptic nightmares. But before engaging in a gloomy calculation of ballistic trajectories, we should also consider the historical legacies of the world’s most powerful missiles. After all, we have survived for six decades now with the unpleasant sense of wondering if someone out there, intentionally or by mistake, was about to push the figurative button and reduce our lifespans to half an hour or less.

Indeed, it may well be that Kim’s new ICBM portends an era not of chaos and apocalypse, but stability and peace. The possession of nuclear missiles have historically had two overarching effects upon states. First, they provide a kind of existential sense of security, because states understand that no other nation is likely to launch an attack, particularly in a war of conquest, when the response could be even one nuclear retaliation on a city. The costs aren’t worth it.

Second, ICBMs tend to make states wary of going to war at all, at least with other nuclear states and their close allies. Now that it has a nuclear missile, the North Korean regime faces the fact that a war that brings in the United States could become a nuclear war, an event that would mean the violent and immediate end of the Kim dynasty and its grim regime. Without a nuclear weapon, North Korea could fight the United States or another major power, much as Vietnam or Afghanistan did, for years. The stakes now have become infinitely greater.

These two factors—the security of deterrence, and the existential danger that looms if it fails—make nuclear states very interested in stability. Thus, the ICBM, in the greatest irony of all history, has so far been a force for peace. Indeed, the late international relations theorist Kenneth Waltz once suggested that it should receive the Nobel Peace Prize.

When the first ICBM was successfully tested, sixty years ago this week, the unpleasant feeling was a lot more pronounced. This was because we knew so little about the intentions of the “other side.” The fist-slamming, shoe-banging Soviet leader Nikita Khrushchev was a mystery to the West. A zealous advocate of a deeply hostile ideology, Khrushchev headed a military superpower that was locked in a life-or-death struggle with the United States.

The first such missile, codenamed R-7 (SS-6 Sapwood in NATO’s classification), was launched on August 21, 1957 from the Baikonur test range in what is now Kazakhstan, landing thousands of miles to the east, in Kamchatka. It was a further three years before the first of these ICBMs entered service with the Soviet armed forces but the promise of the dreadful future was there to behold only weeks after the first test when, on October 4, a modified R-7 carried the first man-made satellite into a near-earth orbit. As the Sputnik beeped menacingly in the dark skies, it not only inspired awe at the accomplishment of the human mind but engendered, among many Americans, a hitherto unknown sense of vulnerability.

The initial response in the United States was one of panic. Here was the Soviet Union, a nation formally bent upon the violent overthrow of world order and the defeat of American imperialism, now deploying a rocket that could destroy U.S. cities in a matter of hours. In the aftermath of Sputnik, Sen. Henry Jackson called for a “week of national shame and danger.”

But other Americans, including President Dwight Eisenhower, understood that the Soviets saw their new rockets as defensive weapons designed to deter a possible American attack. Soviet leader Nikita Khrushchev grasped this almost immediately. “We estimate, that the [two] blocs presently possess such means of destruction as to make war unthinkable, if not impossible,” Khrushchev announced in his famous “Peaceful Coexistence” speech of February 1956. It was either a peaceful Cold War “or the most destructive war in history,” Khrushchev said. “There is no third way.” Wasn’t war still possible? Khrushchev believed that nuclear weapons ruled that out. “The danger of a military conflict is absent,” he explained in July of that year.

Khrushchev was so certain that his new weaponry would protect the USSR and make war insane that in December 1959 he opted to unilaterally reduce the size of the Soviet conventional army. The military brass were not amused but Khrushchev believed that in a nuclear age conventional weapons were little more than “old junk, scrap metal, which hangs like pounds of weight on the necks of the people, distracting millions of working hands from creative labour.” Khrushchev argued that large armies were simply redundant, for “how can any country or group of countries in Europe invade us when we can literally wipe these countries off the face of the earth with our atomic and hydrogen weapons and by delivery of our missiles to any point on the globe?”

Once he realized what powerful means he had at his disposal, Khrushchev rarely missed an opportunity to use them for political leverage. In November 1956, he infamously threatened nuclear retaliation against Great Britain and France, which had conspired with Israel to launch war against Egypt over the Suez Canal. The war was brief. London had to quit under U.S. pressure, and the others followed suit. But although it was the financial crunch caused by U.S. threats, and not Khrushchev’s bluster, that forced British prime minister Anthony Eden to back out of the adventure. The Soviet leader immediately credited himself with saving Egypt from “imperialism.”

Convinced that atomic diplomacy worked, Khrushchev would do it again and again. He did it in 1957 to “save” Syria from the threat of a Turkish invasion; in 1958 he did it to ward off a possible American intervention in the Second Taiwan Straits crisis; in 1958–61, he did it again in his futile scheme to force the West to surrender Berlin; and, mostly famously, he used atomic diplomacy during the 1962 Cuban Missile Crisis. Khrushchev concluded that the Americans would compromise rather than fight a potentially suicidal war. As he explained to Mao Zedong in 1958, “Three-four missiles and there would be no Turkey.” Ten missiles would suffice to destroy the UK. “Now, that we have the [inter-]continental missile, we also hold America by the throat. They thought that America is out of reach. But this is not so.”

Khrushchev liked to engage in belligerent rhetoric every bit as militant as Kim Jong-un does today. But one thing is clear in retrospect: for all his threats to produce missiles “like sausages,” and the (sadly misinterpreted) promise to “bury” the United States; for all his feats of rage, fist-slamming and shoe-banging, Khrushchev was determined to avoid war. And every time he pushed himself into the corner, as he did over Berlin in 1958–61 and in Cuba in October 1962, he found a way to back out.

The Cuban experience was particularly dramatic. At the height of the crisis, which Khrushchev brought upon himself by secretly deploying nuclear missiles on Cuban soil, Fidel Castro effectively asked him to carry out a preemptive nuclear strike against the United States. “What is this—temporary madness or the absence of brains?” Khrushchev raved after learning of Castro’s proposal. He was later heard grumbling: “Only a person who has no idea what nuclear war means, or who has been so blinded, for instance, like Castro, by revolutionary passion, can talk like that.”

Khrushchev always styled himself as a revolutionary but, faced with the real possibility of a nuclear war, as he was in Cuba, he threw his ideological commitments overboard and beat a hasty retreat. President John F. Kennedy was equally frightened, and made important concessions to allow Khrushchev to save face. Both realized that the last thing they needed was a war that neither nation would survive.

Sixty years have passed since the maiden flight of the R-7, and the world has not become a safer place. There were only three nuclear powers in 1957; today, there are nine. Not all have ICBMs, but on the whole the arsenals are far more lethal than in the early years of the Cold War. A nuclear Armageddon has fortunately been avoided. The reason is as obvious today as it was obvious to Khrushchev when he embraced the missile: no one wants a suicidal war.

As militant and seemingly unpredictable as Kim Jong-un has been, he faces the same situation as did Khrushchev during the height of the Cold War. He gains security and stability by threatening to use his new ICBM; he loses everything if he actually uses it. Kim will bluff and bluster but he won’t “push the button”—unless he comes to believe that the survival of his North Korean regime is under imminent threat. American statesmen wisely avoided pushing Khrushchev into that kind of corner, and thirty years later the broken Soviet state came to a peaceful end. That is a victory U.S. leaders today should emulate.