How Lenin and Wilson Changed the World 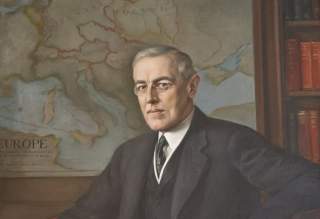 Exactly one hundred years ago this month, President Woodrow Wilson and Vladimir Lenin articulated two competing messianic and universalist visions for a new world order. This tectonic shift in geopolitical thinking marked the rise of ideologically driven foreign policy. Emerging simultaneously from the extreme edges of Western civilization, the two visions aimed to prevent the unprecedented bloodletting of the Great War. They intended not only to save Europe from itself, but the rest of the world from Europe. Although they had little in common, Wilson and Lenin shared one similarity—they saw themselves as revolutionaries in the realm of diplomacy and geopolitics. Nothing short of the world order was at stake. And an existential dependency between Russia and the United States emerged as they defined their new identities as global players in relation to each other.

In February of 1917, a revolution toppled the Romanov dynasty and made the Entente a nonautocratic alliance. Without the February Revolution, Wilson’s promise to “make the world safe for democracy” would have made no sense. In his famous address to a joint session of Congress on April 2, 1917, the U.S. president reinterpreted the Great War as a struggle of “free and self-governed peoples” against “selfish and autocratic power.” No European leader thought in those terms in August of 1914 when the tangle of patriotic, nationalist, imperialist and dynastic loyalties justified the rush to war.

Wilson made the fundamental assumption that has guided American foreign policy ever since—that democracies would never fight each other. Associating espionage with autocracy and the corruption of balance-of-power politics, Wilson aimed to extricate the world from the cynicism of European geopolitics. “Self-governed nations do not fill their neighbor states with spies,” he argued, “or set the course of intrigue to bring about some critical posture of affairs.”

In reality, the United States had no problems cooperating with Germany until unrestricted submarine warfare directly threatened U.S. lives and interests in 1917. Moreover, British intelligence monitored U.S. public opinion regarding the war and carefully chose its moment to share the Zimmerman Telegram with Washington, DC to tip the scale in favor of engagement in the conflict. Wilson’s point was clear however: an American-led world order would break with the European tradition of back-room deals, secret treaties and espionage. Transparency would become the fabric of a new, liberal world order.

Two weeks after Wilson’s speech, Lenin arrived at the Finland Station in Petrograd and gave a speech that contained his famous “April Theses,” which exposed the war as “a predatory imperialist” conflict fueled by “the capitalist nature” of bourgeois governments. By catalyzing further revolutions, Lenin argued, the war would lead to “a new International” of worker and peasant democracies. Like Wilson’s, the Bolshevik vision also contained the millenarian promise of a peaceful golden age. Lenin also treated internationalism as an integral component of socialism. In a move anticipating WikiLeaks, the Bolsheviks decided to discredit European diplomacy by publishing the secret negotiations and agreements between the Russian Empire and its allies. Seeking peace without contributions and annexations, Lenin envisioned a transparent revolutionary world order beyond traditional European diplomacy.

Lenin and Wilson both believed that ideology could liberate mankind from imperialism. Articulated within days of each other, their competing messianic visions both aimed to de-Europeanize global geopolitics after three centuries of the Old World’s dominance. One knows a systemic crisis when it spawns challenges from both geographic and political extremes. Aiming to overcome the geopolitical legacy of the “long nineteenth century,” Wilson and Lenin assumed that the proliferation of ideologically similar regimes would ensure peace. Their visions’ competitive symbiosis would define the fate of the world for the rest of the century. But although the age of ideologically driven foreign policy had begun, it did not evolve in a linear fashion.

Lenin’s utopianism yielded to Stalin’s conservative retrenchment at home and abroad in the 1930s, while victory in the Second World War created an alternate foundation myth rooted in spheres of influence and balance of power considerations of the post-war settlement. The Truman administration would mistake the brutality of Soviet policies in occupied Eastern Europe for messianism, although Churchill’s “iron curtain” metaphor contradicted George Kennan’s alarmism about relentless Soviet expansionism. The world slipped into the Cold War as ideology began to oversimplify and exaggerate local civil wars and led to their internationalization and brutalization, as in Korea and Vietnam.

Embracing the formula “forward to communism means back to Lenin,” Khrushchev’s de-Stalinization resurrected Lenin’s messianic vision and used it successfully to support decolonization. But as Soviet messianism began to implode in the 1960s, especially after the invasion of Czechoslovakia, the Brezhnev regime re-embraced the geopolitically contained Great Patriotic War foundation narrative. The Helsinki Accords and their final settlement of post-war European borders became central to Brezhnev’s quest for international legitimacy. Meanwhile, amid the socioeconomic catastrophe of the 1970s in the West, the Carter administration latched on to human rights in its first attempt to undermine Moscow’s newfound confidence.

And just when Soviet ideology exhausted itself by the 1980s, President Ronald Reagan re-moralized the Cold War with the prophecy that an American-led world order would defeat the “evil empire.” Gorbachev’s “new thinking” became the last Soviet response to the American messianic challenge. But the general secretary’s vision of a pluralistic internationalism, articulated in his famous UN speech in December of 1988, became the unintended victim of the Soviet collapse.

America’s unipolar moment lasted for a generation, but the liberal globalist project is now unravelling. Self-inflicted wounds are partly to blame: chaos in the Middle East, the financial crisis of 2008, the Snowden revelations. Meanwhile, developing nations have begun to claim their role in determining the geopolitical and economic future of the world.

Whether the emerging global system becomes multipolar or a-polar remains unclear, but universalist and messianic ideology is on the wane. The Western-led world order is in crisis, but no messianic ideology has yet offered an alternative. Instead, a drift towards regionalism has increased the influence of small powers amidst the chaos of a profound geopolitical transformation. The post-Western world looks to become post-ideological, too. Even Donald Trump’s administration has embraced a form of American exceptionalism shorn of globalizing and messianic goals.

A century after their birth, Wilson’s and Lenin’s messianic geopolitical visions have passed into history, but their disappearance has also greatly complicated making sense of a world in the process of rapid fragmentation.

Anton Fedyashin is an associate professor in the History Department at American University.