How Long Before U.S. and Russian Jets Clash Over Syria? 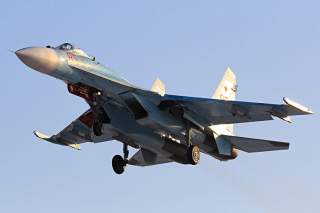 How long will it be before American and Russia jets dogfight in the skies over Syria?

That possibility seems more likely after the latest in a string of confrontations between American and Russian aircraft. Earlier this month, Russian aircraft bombing U.S.-backed rebels fighting ISIS and the Syrian government almost confronted U.S. Navy fighters, according to the Los Angeles Times.

The Pentagon was incensed by the attack, which occurred on Syria’s border with Jordan, and not where Russian forces have operated until now. “No U.S. forces were present in the area, but the U.S. military scrambled fighter jets and used an emergency communications channel set up to avoid air accidents to tell Russian officers to end the strikes,” U.S. officials told the Times.

“The Russian Su-34 fighter-bombers left the area at first, but came back for a second strike after the U.S. F/A-18 fighters went to refuel. The second attack killed several Syrian rebels attempting to provide medical support to the survivors of the initial one, officials said.”

CNN reported that U.S. pilots tried to radio their Russian counterparts over a previously agreed frequency, but received no answer. Russia’s Ministry of Defense later denied that the strike had ever happened.

This is not the first aerial confrontation between both nations over Syria. Military aviation site The Aviationist lists several incidents over the last eight months between Russian and American manned aircraft and drones, most reportedly involving Russian planes getting uncomfortably close to U.S. and NATO aircraft. Israeli F-15s and Russian Su-30s almost clashed over Syria in April. Underscoring how lethal this aerial game of chicken has the potential to be, Turkish F-16s shot down a Russian Su-24 that allegedly crossed into Turkish airspace.

In theory, there shouldn’t be a problem. The U.S. and Russia have set up a hotline for Syria, though curiously, the communications channel isn’t for military matters. Israel has also set up its hotline with Moscow.

Equally important, there doesn’t seem to be any particular reason to fight. The Syrian rebels don’t have an air force, so there’s no excuse for a U.S. Navy F-18 to stick a missile up the tailpipe of a Russian Sukhoi jet—or vice versa—because the pilot thought it was an ISIS jet. Russia does have bases in Syria. The U.S. also has special-operations forces in the country. But neither side has so many troops on the ground that American or Russian jets are likely to accidentally bomb each other’s forces, or need to call in friendly interceptors to provide air cover.

Which means that if a dogfight occurs, it’s because the White House decided that protecting those U.S.-sponsored rebels from Russian airpower is worth a war. Or, Russia suddenly decides that it will protect Iranian and Hezbollah forces from Israeli strikes.

Neither possibility is likely. For its part, those Russian jets that struck the rebels waited for the American fighters to leave the area. Clearly, Moscow isn’t itching for a fight, though the fact that the strike took place at all indicates that Russia is willing to use force against American clients.

All of this suggests a situation that is rational, a game where everybody knows the rules. But as we all know, fate is fickle. All it takes is a faulty sensor, a mixed-up computer or a nervous pilot for the shooting to start. One of the most remarkable facts of the Cold War is how infrequently U.S. and Soviet military aircraft engaged in combat. Note that the word is “infrequent” rather than “never”: U.S. and Soviet aircraft shot each other down eighteen times between 1950 and 1970, according to a Wikipedia tabulation. This doesn’t count proxy wars such as Soviet pilots flying North Korean MiG-15s during the Korean War.

The latest incident proves the sheer craziness of the air war over Syria. Two factions waging two different air campaigns over the same country. Two factions with goals that are somewhat similar—the West and Russia both want ISIS gone—but differing over which of the rebel factions to support or destroy, as well as whether Assad should go. Two factions that also have a long history of confrontation short of war, and deep mutual suspicion. Add in a hotline that isn’t configured for military-to-military communication, and you have a situation ripe for deadly miscalculation.

There’s just not enough room in Rancho Syria for two sheriffs. If the U.S. and Russia both wage air wars over Syria in the long term, one of three things must happen. Either the U.S. or Russia withdraws their aircraft and lets the other power conduct the bombing. Or, Russia or the U.S. let the other take command of all air operations (about as likely as Obama and Putin sprouting wings and flying to the moon). Or, sooner or later there will be blood.