How Long Can China Ignore Its Growing Debt Pile? 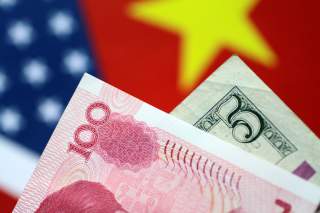 Quarter after quarter, China’s gross domestic product numbers keep coming in nearly perfectly on Beijing’s forecasts. The trouble for the world’s second-biggest economy, however, is that its debt keeps on rising while necessary reforms take a back seat to the president’s political ambitions.

According to China’s National Bureau of Statistics, GDP expanded by 6.9 percent in the second quarter from a year earlier, ahead of analyst forecasts for 6.8 percent growth. The pace of expansion was the same as the first quarter, helped by faster industrial output (up 7.6 percent), fixed-asset investment (up 8.6 percent) and retail sales (up 11 percent).

Crude steel production reached an all-time high, while consumption contributed 63 percent to GDP growth in the first half of 2017, aiding the government’s push for a rebalancing from investment to consumption-driven growth.

Beijing has targeted annual growth of around 6.5 percent for 2017, which would place Chinese president Xi Jinping in a confident position ahead of fall’s key National Party Congress. With the Congress expected to usher in a second five-year term for Xi, Chinese policymakers are keen to keep the economy growing to ensure social stability in the communist-ruled nation of more than 1.3 billion people.

However, other economists have pointed out that industrial-led production driving the economy forward has become a familiar story. Much of the new infrastructure has been in the sparsely inhabited western deserts, with rising government spending on “bridges to nowhere,” adding to Beijing’s growing deficit that now exceeds 260 percent of GDP.

Total social financing plus bonds, China’s broadest measure of credit, expanded by nearly 15 percent in June, which followed May’s 15.3 percent increase. Chinese banks issued some 1.5 trillion yuan in new loans in June, or around $227 billion, compared with 1.1 trillion yuan the previous month, with more than a third of such loans helping to fuel surging house prices.

Nationwide property prices surged by 16 percent from a year earlier in the second quarter, primarily due to gains in medium-size and smaller cities. However, property-related spending is now the second-largest share of consumption after food and alcohol, suggesting that Chinese consumers will soon have to start tightening their belts to afford escalating housing costs.

“What is important to note is that this [GDP result] is heavily driven by credit and fixed-asset investment,” Christopher Balding, associate professor at the Peking University HSBC School of Business, told Bloomberg News. “Despite the talk, there is no change to the Chinese growth model.”

“Both the official GDP figures and our own measure of economic activity suggest growth held up well last quarter, with more timely data showing few signs of a slowdown heading into Q3,” according to Capital Economics, which has previously criticized the quality of China’s GDP data. “That said, we think it is only a matter of time before the government’s efforts to rein in financial risks start to weigh on growth.”

In May, Moody’s Investors Service downgraded China’s credit rating for the first time in nearly three decades due to concerns over its addition to debt.

“The downgrade reflects Moody’s expectation that China’s financial strength will erode somewhat over the coming years, with economy-wide debt continuing to rise as potential growth slows. While ongoing progress on reforms is likely to transform the economy and financial system over time, it is not likely to prevent a further material rise in economy-wide debt, and the consequent increase in contingent liabilities for the government,” the U.S. credit-rating agency explained.

The decision attracted a rebuke from Beijing however, which described it as using “inappropriate methods.”

A spokesman for China’s Finance Ministry said Moody’s “overestimated the difficulties faced by China’s economy, and underestimated the Chinese government’s capability to deepen the supply side structural reform and moderate expansion of gross demand.”

However, as noted by Capital Economics’ Mark Williams, recent Chinese growth has been fueled by loose credit to keep “zombie” firms alive rather than supporting emerging industries. Just like the developed world prior to the 2008 global financial crisis, Beijing could be forced to bail out its banks’ nonperforming loans, delivering a massive hit to its growth prospects.

Should residential property prices start falling, construction companies and developers could be unable to repay their debts, adding to the woes of the banks, while heavily indebted consumers could inflict their own spending strike.

At a recent financial conference, Xi said the government would place priority on “guarding against systemtic risk in the financial sector and continuing the government’s effort to reduce leverage in the economy, especially cutting debt levels in state-owned enterprises,” according to the Wall Street Journal.

However, as highlighted previously by the National Interest, China’s debt pile is showing little signs of shrinking, while Beijing embarks on even more ambitious spending projects such as its One Belt, One Road initiative.

The International Monetary Fund expects China to post 6.7 percent GDP growth this year, dropping to an annual average thereafter of 6.4 percent through to 2020. However, achieving this target would require a greater role for market forces, including reforms to politically sensitive state-owned enterprises, which Beijing has been reluctant to tackle, fearing the potential for popular discontent.

Moody’s was not alone among other credit-rating agencies in failing to forecast the 2008 crash. Its latest downgrade on China suggests it may have learned from its mistake, but has Beijing learned its lesson too?