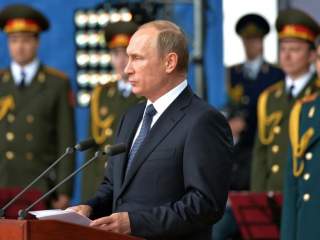 Syria teaches us that escalation dynamics are liable to keep the United States out of a direct confrontation with Russia, yet give Moscow the latitude to prevail in a proxy conflict where its interests are stronger. The last time the West won such a proxy war was Afghanistan, which came at the price of the complete destruction of Afghan society, and a large civilian toll over ten painful years. America, along with every country in the region, is still dealing with the consequences of that victory over the Soviet Union. Let's not look back on the Cold War rosy-eyed, forgetting what it cost to those who played as battleground. Winning in Ukraine might have rivaled some of the proxy wars we fought against the USSR, with a casualty toll orders of magnitude higher than the current number killed in the conflict.

Who Pays the Real Costs of a Proxy War?

In 2015, I considered the potential cost Ukraine might pay to test Western theories of escalation, and Russian casualty tolerance, with the Afghan experience in mind. It would certainly be voluntarily, just as the Afghan mujahedeen volunteered back then, and the Syrian opposition now. The performance of U.S. proxies in Syria, along with those of Turkey and Saudi Arabia, only further confirms those doubts. We excel at fighting; it's winning and finding a political settlement to the war that frequently eludes the United States.

Russian troops have died in Syria, from military advisers to special forces units, and even pilots. These costs have not been sufficient to make Moscow reconsider its intervention, or withdraw. At each turn, Moscow has intensified its air campaign, thrown more equipment into the fight and escalated. If the Russian leadership is so casualty conscious in Ukraine, why risk lives in Syria, where the politics are hardly better? Russians are not exactly pining away for a protracted conflict in the Middle East. Does the Syrian intervention support the "casualty aversion" narrative we heard so much about back in 2014 and 2015?

John Kerry's mention of a partition in Syria as a possible alternative should the cease-fire fail is heavy with irony. A de facto political partition is what Russia sought in Ukraine, with its demands for federalization and devolution of power to the regions. Instead Ukraine remains a unitary state, while a possible, if not likely, outcome of the proxy war in Syria will be some sort of partition of the country in accordance with the prevailing military realities on the ground. Over the course of a five-year proxy war in Syria, the parties involved have successfully destroyed the country, with hundreds of thousands of lives lost. The costs of abetting a prolonged proxy war are self-evident; the gains less so, especially for Syria's people. In retrospect, if the outcome in Syria is a political settlement orchestrated by Moscow, and largely on Russian terms, will those efforts prove justified?

Getting Tough with Russia Is a Better Slogan than a Plan

Syria offers one additional lesson, which is that getting tough with Russia, in and of itself, does not get you anything. Getting tough does not a plan or a strategy make. Russian leaders are many things, but they are not soft. When the Turkish air force shot down Russia's Su-24, it came as surprise to Moscow, but did it result in any positive outcomes for Ankara? After making this dramatic political point, Turkey has seen just as many airspace violations by Russian jets since the incident as before. Recep Tayyip Erdoğan may have felt good standing up to Russia, defending his country's and his own image, but making that point came at a substantial cost in terms of security and economics. Russia was willing to pay an economic and political price to sanction Turkey, at a time when it can ill afford to do so.

Now Turkey must live with Russia's S-400 air defense system covering its southern airspace and, more consequentially, a new Russian policy to support its nemesis, the Syrian Kurds of the YPG. Russia replaced the downed Su-24 in Syria with another one; how will Turkey cope with the damage that Moscow intends to wreak on its long-term interests? Erdoğan "got tough" with Russia, but he didn't win. His is a cautionary tale for those who see Russia as some pretender to the title of great power, expecting it to back down at the first sign of strength or combat casualty. So what's Ankara's next bright idea, now that the Russians have not only failed to scatter, but instead dealt it a significant geopolitical defeat in Syria? Turkey is arguably the biggest loser in Syria, the difference between getting tough and being smart. That could have been the United States’ foreign policy in Ukraine.

America was wise to be cautious and deliberate in supporting Ukraine, working to train the armed forces and national guard, and supplying nonlethal equipment. Those foundational efforts may result in a much more capable and professional force, and they don't exclude sending our precious Javelins either. In time, Ukraine's army will be in a much better position to integrate more capable Western equipment, though it is many critical reforms away from such an end state. A long-term commitment to promote institutional change in Ukraine, and reform the force, shows the best of what the United States has to offer and leverages the capacity of one country to help transform another.

The Syrian experience demonstrates that the decision to focus on structural reforms and assistance in Ukraine over weapons is a victory of judgment over impulse.

Michael Kofman is a Global Fellow at the Kennan Institute, Wilson Center, and an analyst at CNA Corporation. The views expressed here are his own.