How Macedonia Is Leading on the Refugee Crisis 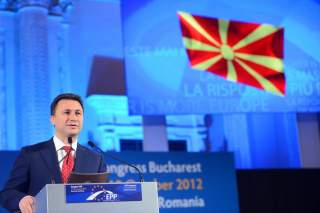 In little more than a year, millions of desperate refugees have fled from the wars in Syria and Iraq. Many hundreds of thousands have reached European shores, with their distressing plight broadcast around the world.

The sluggish reaction from some of the world’s biggest economies so far has forced the smaller ones to step up. And it will be these countries, especially across the Balkans that will remain pivotal in our ability to defeat ISIS.

One to watch is the small country of Macedonia. This country was on the front line of the crisis, operating outside the European Union, but acting as a passage between Greece and the rest of the continent.

The route through Macedonia between the Middle East and Europe has been used for centuries. It is an historic route across continental Europe that has brought trade, culture and prosperity.  Today that route brings a very different and troubling story.

In just two months last summer, 42 thousand refugees entered Macedonia. The country’s entire population is roughly 2.1 million — the same as Kentucky — and since this crisis began it has been forced effectively to let the entire population of Idaho pass through its borders. Foreign Minister Poposki spoke in 2015 to say that Macedonia, a country of 2.1 million inhabitants, had seen 800 thousand migrants use this route in an attempt to make their way from one EU country (Greece) across a non-EU, non-Schengen country (Macedonia) back into the EU.

Eventually, Macedonia’s leaders acted where no other European leader was prepared to do so.  The Prime Minister Nikola Gruevski declared a state of emergency and closed the borders. It was a bold and courageous move that prompted the rest of Europe to act. It was quickly followed by a visit to the region by European Council President Donald Tusk, who declared: “No European country will be a transit country.” As the Bavarian prime minister and president of the Christian Socialist Party (CSU) in Germany Horst Seehofer said: “We in Germany benefited from this. Macedonia basically did what Germany was supposed to do.”

And it is on this border, with our partners in Macedonia, where we can make the greatest efforts to stabilize the Balkans, and truly and effectively make a dent against the ISIS terror threat.

In June, Macedonian police arrested four men they suspected of fighting alongside ISIS. Authorities in the former Yugoslav republic estimate as many as 130 of its citizens have fought or are currently fighting with Islamist groups in Syria and Iraq.

A recent NPR investigation highlighted that as many as one thousand individuals have traveled from the western Balkans to territories held and controlled by the Islamic State or Jabhat al-Nusra and other militias in Syria and Iraq. These are people mobilized by messages that they don’t belong in Europe and that Europe has rejected them. And with them, the flow of weapons has followed.

The president of Turkey, Recep Tayyip Erdogan, has threatened to open his country’s borders to allow refugees to stream into Europe. At a critical moment in this crisis, this threat could soon become a dangerous reality that throws an already troubled region into even greater turmoil. More than anything, it will put a greater burden on our allies in the Balkans. If President Erdogan decides to act, the flow of terror will follow the mass flow of the desperate.

While many countries have failed to act, it is reassuring to see leaders in countries like Macedonia take necessary action. And it is exemplified by Hungarian Prime Minister Viktor Orbán’s support: “Hungary will provide every assistance with the protection of borders, whether technical or financial assistance, or personnel.”

This has been one of the greatest upheavals in geopolitics in a generation, the largest movement of people since World War II, and it is triggering a drastic change across Europe.

The millions of people flocking to Europe are fleeing the very terror we are trying to defeat.  And for the sake of stabilization across the region, we must look to all our partners – none more so than in the Balkans.

Small nations in Eastern Europe are too easily dismissed by the American and European establishment, yet stability and security there will prove essential in the world’s ability to combat terror.

We ignore the warnings from our friends in the Balkans at our peril.

Wes Martin is a retired Army colonel who served as the Senior Anti-terrorism Officer for all Coalition Forces in Iraq.