How to Make the Korea Problem Worse: Unification 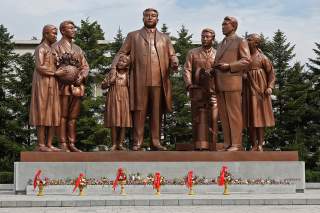 For centuries Koreans have lived in the shadow of great powers; among their greatest fears has been that their fate will be determined by surrounding powers. At the end of the nineteenth century, rivalry among the imperial powers, Japan, Russia and China resulted in the Japan’s annexation and occupation. At the end of World War II, the United States and the Soviet Union established occupation zones along the 38th parallel, effectively dividing the Korean Peninsula to this date.

Amid fears of a sixth nuclear test, Robert Kelly, building on work by Michael Swaine, is proposing a joint U.S.-China quid pro quo to resolve the nuclear issue, effect unification, terminate the U.S.-ROK alliance and “Finlandize” the Korean Peninsula. Kelly’s advocacy “to find some off ramp before the Kim family pulls us all over the edge” fits in with the near-fevered debate on North Korea in the foreign-policy commentariat and in the Trump administration.

The search for a solution to the North Korea conundrum has a long history, one littered with failed diplomatic efforts spanning from the 1990 North-South Agreement, the 1994 Agreed Framework, the 2005 agreement and Obama’s 2012 agreement. More than once, Pyongyang was offered a potpourri of benefits in exchange for denuclearization, such as energy and economic aid, security assurances U.S.-DPRK normalization and a peace treaty. In each instance, Pyongyang found a way to say “no” after saying “yes.”

Preemptive strikes are now being bandied about—another off ramp. But before launching any strike, policymakers would do well to acknowledge what few appear willing to do openly; namely that the United States and North Korea exist in a state of mutual deterrence; and that there is no kinetic solution to the challenges posed by North Korea in which benefits are not significantly outweighed by the risks involved to U.S. citizens and military in South Korea. Seoul cannot be moved, and North Korea’s artillery and missile batteries are capable of delivering a devastating blow to the capital and beyond.

The immense frustration driving the current debate is understandable. North Korea represents one of foreign policy’s “wicked problems,” one difficult or impossible to solve at present given its multifaceted complexities. It recalls former Secretary of State Warren Christopher’s description of Bosnia as “a problem from hell.” North Korea is the land where options range only from bad to horrible. While resistant to resolution today, some problems can be managed until opportunities for a resolution present themselves—and with North Korea, we’re not there yet.

This gets us to Kelly’s proposed policy, assuming that China is prepared to pull the plug on North Korea. How should we consider the costs? Kelly argues for the “moral imperative of ending the world’s worst Orwellian tyranny as soon as possible” and turning a deaf ear to “South Korean discomfort with the specifics of unification.”

Morality has always played an important role in U.S. foreign policy, but this is flawed on several levels. It assumes that if China cut off food and fuel to North Korea, they the Kim regime would go quietly, a la East Germany, and presto, unification under Seoul. North Korea disdains China as much as China disdains it. Their missiles can be fired in all directions. They have spent four decades trying to acquire a weapon of mass destruction precisely to enable the Kim regime to survive. It is unlikely they would go quietly.

Another problem is that his plan would unilaterally rip up the U.S.-ROK alliance and leave Korea to the tender mercies of the Middle Kingdom. Worst fears realized: a unification in which neither North or South Korea has a vote. Morality would dictate that our allies in South Korea, who have fought to establish a vibrant democracy, fought with us in Vietnam and every war since, should have some say in their future and the future of the peninsula. That’s why they call it the Korean Peninsula.

The assumption that a unified, nonaligned Korea would be prepared to put its fate in the hands of a hegemonic China defies three thousand years of Koreans’ historical experience with China. Korean textbooks record over nine hundred Chinese invasions of Korea. Worse, jettisoning the U.S.-ROK alliance for a China-dominated, “Finlandized” peninsula would likely have ripple effects on the U.S. security guarantor role in Asia and beyond. It would be America’s “east of Suez” moment, realizing the break down the U.S. alliance structure in Asia that Beijing has long sought.

President Kim Dae-jung, in the aftermath of the June 2000 Pyongyang Summit, put the alliance in Korea’s strategic context and stated that the alliance would have staying power even after unification. The reason, he said, is that “there is a big land power to our north, and it’s not going away; a large maritime power to our east, and it’s not going away. The U.S. is big, strong and far away.”

Kelly also dismisses Japanese reaction to such a deal. Japan would certainly be relieved if North Korea was gone, but a deal reached over the head of alliance partner Japan would raise doubts about the U.S. alliance commitment. Also, Japan is determined not to live with a hegemonic China. And, if it does accept Chinese hegemony, the alliance and the familiar U.S. position in Asia will be a fast-fading memory.

Are we now so concerned that North Korea’s development of an intercontinental ballistic missile capability will change the essential deterrence equation that we will pay the price advocated by Kelly? Pyongyang’s only virtue is that it is not suicidal. They are not jihadists. Secretary of Defense James Mattis has reaffirmed that use of weapons of mass destruction against the United States and its allies would be met with an “effective and overwhelming” response.

Discomforting and dangerous as an ICBM-cable North Korea would be (and it is still at least 4–5 years away by our estimate), we are not yet persuaded it would undermine deterrence. Remember, Pyongyang has extended scud and No-Dong missiles that can deliver its nukes to U.S. bases in Korea and Japan already. Some of the “end of the world” hysteria in regard to a North Korean ICBM is reminiscent of the debate in 1964 when crazy Mao was acquiring nuclear weapons, which we have been living with ever since.

So where does the North Korea wicked problem leave us? Obama’s “strategic patience” policy is viewed as a failure. But one of its shortcomings was that America never went all out on sanctions as it did with Iran. The most sensible next step is to apply a full-court press—secondary sanctions (including sanctions against Chinese banks and front companies) to remove North Korea’s access to the international financial system and strip its access to hard currency. Pyongyang survives with an informal cash economy, allowing Kim to buy off the elite. Let’s find out what happens when they don’t have cash. Combine that with bolstering defenses, a Putin-style cyberattack, fake news (e.g., an assassination attempt, Kim is impotent, etc.), and other active measures would not be a bad start for a Trump North Korea policy.

Robert A Manning is a Senior Fellow at the Atlantic Council and its Foresight, Strategy and Risks Initiative. James J. Przystup is a Senior Fellow at the Institute for National Strategic Studies at the National Defense University. The views represented in this article are theirs alone and do not represent the views or policies of the Atlantic Council or the National Defense University.