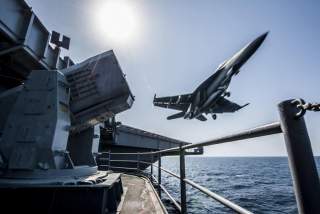 THE GLOBAL maritime system has begun to fray and tatter. American leadership wove together the threads of this fabric—international laws, accepted norms, mutual security and free trade—following World War II. Now, after a generation of unchallenged U.S. maritime preeminence, things have changed. American maritime interests have evolved beyond simply protecting freedom of navigation. Resource exploration and securing undersea “critical infrastructure” have made the maritime domain more important than ever. Threats to those interests have also evolved, and are multiplying rapidly in number and sophistication. The United States faces not one, but two emerging naval powers—Russia and China—challenging its maritime dominance.

Unfortunately, the United States has increasingly failed to uphold its maritime interests. The Navy battle fleet is the primary instrument used by the United States to secure and, if necessary, defend them. Yet the fleet’s size and condition reveal serious shortcomings. On the most basic level, the fleet averaged 740 ships in the post–World War II era but currently stands at only 282 ships. Though our sailors and Marines remain second to none, the condition of the fleet has deteriorated as the need for naval power has far outstripped the supply of available ships. The results of this supply-demand mismatch are longer deployments; hundred-hour workweeks; and deferred, delayed and canceled maintenance and training. This long-term downward spiral in combat readiness has contributed to avoidable incidents such as the USS John S. McCain and USS Fitzgerald collisions that recently resulted in the deaths of seventeen sailors in the western Pacific.

American maritime interests, threats to those interests and responses to those threats have changed and created a new context in which the United States must rebuild its naval power. The White House, the Pentagon and Capitol Hill need a renewed appreciation for America’s interests at sea and the seriousness of the emerging threats to them. Simply put, the United States must engage in a long-term, aggressive campaign to build a larger and more capable battle fleet in order to deter rising competitors, head off a potential arms race and prevent a destabilizing of the international environment. It is U.S. law that the Navy achieve its stated minimum force-structure requirement of 355 ships. The United States should meet this benchmark within ten years.

MARITIME INTERESTS are so embedded in our nation’s history that policymakers and the public often take them for granted. Even the vastness of the world’s oceans has seemingly diminished, given the ease of today’s air travel and an internet that can connect far-flung places. Yet it is important to remember the significance of the oceans and inland freshwater Great Lakes for America’s economic prosperity. 39 percent of Americans, nearly 125 million people, live in counties that directly touch oceanic shorelines. Three million jobs are directly tied to the oceans or Great Lakes, and those jobs contribute $352 billion to the nation’s economic output. Nearly 80 percent of U.S. export trade by tonnage moves over water, and 90 percent of general cargo moves via container ships. The national maritime transportation system carried $1.5 trillion in cargo to and from American ports last year. America’s allies and partners also heavily rely on seaborne transportation. About 95 percent of the globe’s total commerce flows over the seas.

Protecting freedom of navigation is thus a paramount U.S. interest. This core interest—manifested in unimpeded transit in international waters and access to foreign ports for commercial trade—has endured since the republic’s founding. In fact, the abridgement of this core interest served as a predicate for both the American independence movement and the subsequent first defense of the new nation during the War of 1812. The United States was, then and today, a commercial trading nation.

Although freedom of navigation remains central, our maritime interests have evolved beyond simply securing the seas for commercial transportation. The seas are also at the center of resource exploration that has expanded in scope over time.

During the colonial era and into our first century, fishing and whaling were major sources of national income. Since then, technological improvements have opened new doors, allowing the United States to access more of the resources found in the ocean’s previously impenetrable depths. Today, energy and mineral resource exploration operations are conducted far off the nation’s shores in exclusive economic zones, which represent 3.4 million square nautical miles of ocean space. Drilling and bottom mining rigs now routinely operate thousands of feet below the surface, taking the nation’s interests outward and downward with them.

In addition to new sources of resource wealth, the bottom of the ocean has become layered with “critical infrastructure.” The first transatlantic telegraph cable was laid between Ireland and Newfoundland in 1858, and others have followed. Today, nearly 99 percent of international data moves via underwater cables. Taken together, these cables are hundreds of thousands of miles long and lie in depths as deep as some of the planet’s tallest mountains are high. Resources such as oil, natural gas and minerals flow through a network of underwater pipes and pumping stations that crisscross the continental shelf. The production capacity of this infrastructure is significant. Offshore rigs generate around 1.8 million barrels of crude oil a day.

Perhaps the most obvious, yet least appreciated, national interest at sea is the United States’ duty to uphold its obligations to allies. The United States is a signatory to a series of treaties negotiated following the devastation of World War II. These treaties have bound our nation’s security to some fifty other sovereign states. The number and structure of these alliances are a great source of strength for the United States, conveying a mutual approach to security that neither the United States nor its allies need ever fear fighting alone. The president, as commander in chief, and the Department of Defense, with all of its component services, are required to perform all actions necessary to preserve the security of allied nations as if they were the sovereign territory of the United States itself. It is a heavy burden, but one made more difficult by the fact that, with the exception of Canada, every treaty partner lies across an ocean.

While the Air Force and some light Army airborne elements can get to Europe, the Middle East or Asia by air, most Marine Corps and Army components can only go by sea. Their Humvees, artillery, tanks and logistics trucks are simply too large and too heavy to be carried in sufficient quantities by air to be able to amass a credible combat force rapidly on another continent. To accomplish this task, the U.S. military’s Transportation Command retains a fleet of transport ships to carry division and corps-strength elements to distant locations within one to four weeks of activation. This type of operation was carried out in support of Operation Desert Shield/Desert Storm in 1990–91. Over a six-month period, Transportation Command assets were used to move over five hundred thousand troops and their equipment to Saudi Arabia to enable the removal of Iraqi forces from Kuwait. Conducting such an operation today, however, cannot be presumed with the same degree of anticipated success.

THE DESERT Storm campaign is a good point of departure to discuss emerging threats to America’s maritime interests. Allies, adversaries and certainly Iraqi leader Saddam Hussein were shocked by the speed and lethality of American forces. Many military analysts expected that the nearly 550,000 battle-hardened Iraqi soldiers would inflict significant U.S. casualties and prolong the ground war for months. Instead, U.S. forces suffered fewer than three hundred service deaths and quickly liberated Kuwait. The successful employment of new precision-guided weapons and an overwhelming hundred-hour ground offensive took center stage. These flashy components of the campaign, however, masked the American military’s continued dependence on unimpeded seaborne transport to move massive numbers of troops and equipment into large in-theater operating bases. Behind the scenes, nations such as Russia and China recognized how this dependence on access and freedom of movement could be a key vulnerability. Potential opponents know that deterring the American military’s projection of power requires restricting easy access to a combat theater and freedom of movement inside it. In other words, the lessons learned were to keep the Americans out and restrict their movement if they get in.

Following Desert Storm, both China and Russia began to put these lessons into practice by investing in “antiaccess/area-denial,” or “A2/AD” weapons, communications and intelligence systems. Primarily designed to deny access and freedom of movement, A2/AD systems have the ancillary effect of raising doubts in the minds of allies about the reliability of the American military in a crisis. Coming to the aid of an ally would mean having to brave highly lethal A2/AD weapons.

Chinese A2/AD modernization priorities include advanced mines, surface-to-air missiles, surface-to-surface missiles, stealth aircraft and antiship ballistic missiles. Two prominent examples are China’s “carrier killer” DF-21D and DF-26 ballistic missiles, both capable of long-range strikes and equipped with maneuverable warheads. Even more troubling is China’s development of hypersonic weapons—missiles that can fly five times the speed of sound and at altitudes low enough to avoid most missile defenses. Chinese carrier-killer, hypersonic and other sophisticated weapons systems will be “netted together” with intelligence, communications and fire-control networks.