How to Make the U.S. State Department Great Again 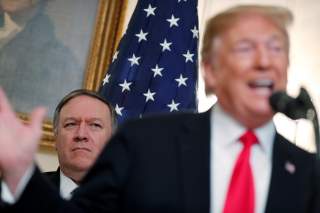 Just last week, the Trump administration announced that it planned to slash the State Department and foreign assistance budget by an additional $12 billion. Eliot Engel, chairman of the House Foreign Affairs Committee, called the cuts “reckless.” Robert Menendez, the senior Democrat on the Senate Foreign Relations Committee, labeled the move “not just short-sighted [but] actually dangerous.” Many Republicans agree. Bipartisanship is rare in Washington, but when the Trump administration initially began slashing State Department funding, Democrats and Republicans came together to tell Secretary of State Mike Pompeo that the cuts amounted to “contempt for diplomacy.” Pompeo’s defense of a winnowed budget came after his predecessor, Rex Tillerson, proposed a 31 percent cut to the State Department budget and eight percent reduction in staff, a move a bipartisan array of representatives and senators also opposed.

Among contenders for the Democratic nomination for the presidency, there is consensus that the budget and prestige of the State Department must be restored. Frontrunner Bernie Sanders, for example, has said the United States needs a “strong State Department to move forward diplomatically.” His top competitor, South Bend Mayor Pete Buttigieg, laid out his foreign policy vision last June in Bloomington, Indiana in which he lamented that the best and brightest would rather work on Wall Street or in Silicon Valley than in Foggy Bottom or USAID, hinting that salaries should be commensurate. Vice President Joe Biden’s supporters often point to his quip, “Don’t tell me what you value; show me your budget and I'll tell you what you value,” to highlight his opposition to State Department cuts. Massachusetts Sen. Elizabeth Warren (D-Mass.), meanwhile, has called for “reinvesting in diplomacy” so that the Pentagon is not the face of U.S. foreign policy. Money might be necessary but alone it is not entirely effective.

Both Democrats and Republicans might be right that it is necessary to reinvest in diplomacy but simply increasing the State Department and USAID budget will not do the trick. Even an exponential increase in State Department resources will be meaningless if Foggy Bottom and Congress cannot figure out how to get American diplomats out from embassy compounds in those societies most contested by adversaries and rival powers.

Each ambassador is chief of mission with oversight over all agencies operating in the country including the Central Intelligence Agency. In reality, they must answer to regional security officers (RSOs) whose job it is to keep the diplomats, facilities, and the information they possess safe and secure. Alas, too many RSOs calculate that the best way to do their jobs is to prevent others from doing theirs. In Lebanon, for example, the U.S. embassy where diplomats both work and live is isolated in the hills on the outskirts of Beirut, about ten miles from the city center. A new U.S. embassy compound currently under construction is just as isolated. In practice, U.S. diplomats are frozen in time. As visitors to Beirut uber around the city, perhaps stopping for coffee at Starbucks, American diplomats live and work under largely the same security parameters they did during the Lebanese civil war that ended eighteen years ago. For too many RSOs, balancing security with the effectiveness of diplomacy is not a calculation they consider. Nor does any RSO want to be the one who loosens restrictions lest he or she be blamed for a subsequent terrorist attack.

Benghazi just made matters worse. Ambassador Chris Stevens’ 2012 murder was tragic but he was the type of ambassador the State Department needs. He got outside the blast walls and was more effective for it. That does not mean that ambassadors need to take mindless risks. Their job is dangerous, yes, but that danger should be mitigated by intelligence and demands upon the host country rather than gilded imprisonment.

Nowhere is the current state failure of U.S. diplomacy more apparent than in Iraq, which is the home of the most expensive and largest U.S. embassy in the world. Some Iraqi leaders privately describe the cycle of protests which began October 1 as the most significant political movement in Iraq since the Iraqi revolt of 1920. American diplomats do not learn about the protests first hand, however. Rather, they rely on Iraqi employees’ accounts, translations from Iraqi media, or second-hand information from European diplomats who are not so constrained by security. The Iraqi parliament is less than a mile away from the embassy but U.S. diplomats seldom visit the building. Instead, they expect their interlocutors to visit them. In effect, this means they limit themselves to a small number of dated and increasingly irrelevant contacts.

Localized protests notwithstanding, street violence and terrorism in Iraq has dropped to surprisingly low levels. Baghdad is safer than Baltimore. A thriving street scene and a restaurant culture have emerged in which American visitors take part, but diplomats can spend their entire tenure in Iraq without going out in town once. Other embassies get around the problems of security by authorizing visits to cleared, safe neighborhoods where they can meet contacts on little notice. Not so the Americans. So, for a billion-dollar embassy and hundreds of millions of dollars more in hardship and danger pay, the State Department gets a country team whose effectiveness is little better than if its members had remained in Washington. Iraqi Kurdistan is as safe as Europe, but there, too, diplomats live and work inside an isolated compound, unable to visit the restaurants and megamalls unless they are on “official business.” Diplomats assigned to the consulate seem more inclined to remain locked up than solicit meetings which would expose them to broader society.

Pompeo has made matters worse by shutting down the U.S. consulate in Basra in the face of a one-time Iranian-backed attack. His decision rewarded terror and incentivized enemies to attack to force diplomats to flee. If intelligence showed a looming Iranian-supported attack or Iranian responsibility for the rocket strike that occurred, then a better response would be proportionate military action to convince Tehran of the need to keep embassies and consulates sacrosanct. If Democratic contenders for the White House truly want to put diplomacy first, then they must understand that military action may be necessary to preserve it.

Just a few decades ago, diplomats could meet with government officials in their country of assignment and collect news and insights otherwise unavailable in Washington. Today, however, CNN, France24, Al Jazeera, the BBC, and other twenty-four-hour international cable and satellite stations do the same thing.

What is missing in Washington is not the insight that comes from a meeting with a deputy interior minister or an undersecretary for finance but rather the pulse of society outside the elite bubble. Consider how the Arab Spring caught diplomats by surprise just a decade ago, or how diplomats who still trumpeted Bashar al-Assad as a reformer not only got that wrong but missed the signs of looming civil war. More recently, Iraqi protests, which few diplomats anticipated, ended up toppling the government and the outbreak of similar protests in Hong Kong fundamentally changed dynamics in that special administrative zone. That diplomats missed such events does not reflect negatively on their abilities but rather is a sign that the manner in which they report on societies is wrong. How to take the pulse of ordinary society is more important than memorandums of conversation which, frankly, few outside the assigned country desk officer will ever read.

If a mechanism can be found to get diplomats out from the compound, then perhaps monthly dispatches based on travel around each country and life on the open market would be far more illustrative than the meetings which now consume diplomats. Taking an eight-hour intercity bus-trip, chatting up street vendors, or developing contacts in shanty-towns can be more important than meeting cabinet officials in posh ministries or businessmen in five-star hotels. Eating in an embassy cafeteria rather than a working-class restaurant or working out in an embassy gym rather than a local one should be a mark of shame. Decisions and political movements develop differently in the twenty-first century than the twentieth century, which means the practice of diplomacy must adjust if it is to provide relevant insights that news agencies cannot.

Balancing security and diplomacy might be a major challenge but judgment is also important. The State Department must also come to grips with a culture that too often wastes money. Documents suggest Secretary of State Hillary Clinton determined her visits in part by a desire to set records for mileage and countries traveled. The worst abuse of the State Department budget—and one still worthy of investigation—was the decision and approval process for Secretary of State John Kerry’s visit to Antarctica, a continent on which there are no countries with which to conduct diplomacy. While Kerry said he wanted to talk to scientists about global warming, he might have saved millions of dollars by just having a Skype conversation. In effect, he and his staff wanted to be tourists in a zone normally handled by other agencies within the U.S. government.