How Mark Esper Is Navigating the Coronavirus Crisis 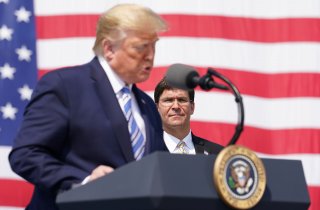 At a time when national and international turbulence have been created to the coronavirus, it is worth taking note of one generally good-news story to date: the American armed forces are holding up well.  That may come as a surprise to those who have read about the brouhaha over the USS Theodore Roosevelt a few weeks ago, as well as a few other issues like the temporary suspension of boot camps by some military services. And challenges could increase in the future. But as I learned in an interview with Secretary of Defense Mark Esper on May 4, the situation is rather good today.

Start with the simplest metric: out of just over two million Americans who wear a military uniform today, counting 1.3 active-duty personnel and members of the National Guard and Reserve less than five thousand have tested positive for the coronavirus. That incidence rate is about two-thirds the national average. But because the military is predominantly young, serious cases are much less prevalent than in American society. There have been fewer than one hundred hospitalizations and just two deaths to date—less than 1 percent per capita rate in the United States writ large. Also, while the USS Theodore Roosevelt did function as a sort of petri dish for the spread of the virus, most military units are somewhat isolated from those urban centers where the coronavirus has hit the hardest to date. As Esper told me, a deployed ship is actually a great place to avoid the coronavirus provided that no one onboard has contracted it!

Second, more than sixty thousand military personnel including forty-five thousand members of the National Guard have deployed throughout the United States in support of the coronavirus response. Some have spelled civilian health care workers in hard-hit cities; most have focused on supply and logistics efforts. Happily, the USNS Comfort and USNS Mercy will be returning back to homeport soon as their hospital services may no longer be needed as backups to overworked hospitals—at least not at this stage of the crisis.

Third, despite temporary suspensions of some accessions of new recruits into boot camp, the armed forces have now restored their personnel pipelines. That is crucial because, even though a tough economy should ease the challenges of both recruiting and retention, today’s all-volunteer force needs to replace about 15 percent of its people every year. To date, there is no indication of any big problem in this area, though it will be important to see how springtime recruiting trends go since the armed forces depend on signing up large numbers of recent high-school grads in the warmer months.

Fourth, small-unit training has continued throughout the crisis. Army and Marine Corps squads and platoons, Air Force and other services’ flight teams, and other core elements of the military’s combat formations have never really slowed down in the crisis to date. They have adopted social-distancing practices and other smart protective measures in doing so, some of which mimic fighting in a chemical-weapons environment (as the Wall Street Journal recently reported), but that has not prevented units that are effectively the size of large families from continuing to work together and live side-by-side. Importantly, such training has continued in South Korea and other forward locations as well, even as life has been significantly altered in most other ways for military personnel in those places, just as with the various lockdowns in America. For sensitive units, such as those manning the country’s nuclear forces, extra testing and quarantining measures have further ensured continuous combat readiness.

Fifth, while larger exercises like Air Force Red Flag training and Army National Training Center rotations have been suspended to date, they are set to resume later this year. The Army is sending about one thousand soldiers who are part of a “security force assistance brigade” to the Joint Readiness Training Center in Louisiana in preparation for its rotation to Afghanistan in a few months. That is smaller than a classic combat brigade of three thousand soldiers but allows safe practices to be tested and refined as a first step. Future resumption of full-bore training will be done carefully, with increased testing of soldiers. Units based in parts of the country where the virus is less prevalent and where hospital capacity is adequate to handle any surge in infections will be prioritized.

Sixth, the defense industrial base continues, for the most part, to maintain continuity of output of vehicles, aircraft, munitions, electronics equipment, and other critical supplies for the U.S. armed forces.

To be sure, problems and concerns remain. Subcontractors for the defense industry are not all operating at a normal pace; as Esper explained (and as Army Secretary Ryan McCarthy told me the week before), those in Mexico, and in severely afflicted U.S. cities, are of particular concern. Bottlenecks may thus develop not only for the production of new equipment but for the parts needed in the maintenance of existing stocks. Also, while the path forward for normal training can be sketched out, it has not actually been implemented yet. Given the American military’s dependence on combined-arms excellence involving multiple types of units in an integrated effort, we cannot spike the football in the endzone until truly reestablishing such training at scale. In addressing all of this, the international threat environment remains unmitigated by the coronavirus, with tension somewhat increasing with China and Iran.

Finally, a word on Esper himself. President Donald Trump made a good choice in nominating him as the nation’s twenty-seventh secretary of defense. He is a West Point graduate and Army Ranger, so he understands the military and its culture. As a Capitol Hill veteran, he understands Congress. And as a defense industry leader, he recognizes that the nation’s defense industrial base is important for preserving the technological excellence that complements the superior quality of the military—yet is too often neglected, or even pilloried, in political and policy debates. Esper is not the larger-than-life kind of figure that Mattis represented but maybe the country doesn’t need that right now. Instead, Esper sees it as his job to implement James Mattis’s 2018 National Defense Strategy, which focuses on great-power competition. This effort remains underway, even in the time of the coronavirus. So far, the American armed forces are holding up well in this difficult time.