How the Media Mangled the ‘Russian Invasion’ of the Trump Administration 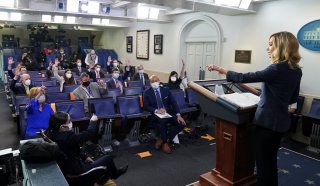 Throughout the Trump years, various reporters have presented to great fanfare one dubious, thinly sourced story after another about Moscow’s supposedly nefarious plots against the United States. The unsupported allegations about an illegal collusion between Donald Trump’s 2016 campaign and the Russian government spawned a host of subsidiary charges that proved to be bogus. Yet, prominent news outlets, including the New York Times, the Washington Post, CNN, and MSNBC ran stories featuring such shaky accusations as if they were gospel.

The willingness of the press to circulate any account that puts Russia in a bad light has not diminished with the collapse of the Russia-Trump collusion narrative. The latest incident began when the New York Times published a front-page article on June 28, based on an anonymous source within the intelligence community, that Moscow had put a bounty on the lives of American soldiers stationed in Afghanistan. The predictable, furious reaction throughout the media and the general public followed. When the White House insisted that the intelligence agencies had never informed either the president or vice president of such reports, most press reactions were scornful.

As with so many other inflammatory news accounts dealing with Russia, serious doubts about the accuracy of this one developed almost immediately. Just days later, an unnamed intelligence official told CBS reporter Catherine Herridge that the information about the alleged bounties was uncorroborated.  The source also revealed to Herridge that the National Security Agency (NSA) concluded that the intelligence collection report “does not match well-established and verifiable Taliban and Haqqani practices” and lacked “sufficient reporting to corroborate any links.”  The report had reached “low levels” at the National Security Council, but it did not travel farther up the chain of command.  The Pentagon, which apparently had originated the bounty allegations and tried to sell the intelligence agencies on the theory, soon retreated and issued its own statement about the “unconfirmed” nature of the information.

There was a growing sense of déjà vu, as though the episode was the second coming of the infamous, uncorroborated Steele dossier that caused the Obama administration to launch its 2016 collusion investigation. A number of conservative and antiwar outlets highlighted the multiplying doubts.  They had somewhat contrasting motives for doing so.  Most conservative critics believed that it was yet another attempt by a hostile media to discredit President Trump for partisan reasons.  Antiwar types suspected that it was an attempt by both the Pentagon and the top echelons of some intelligence agencies to use the media to generate more animosity toward Russia and thwart the withdrawal of U.S. troops from Afghanistan, a process that was still in its early stages following Washington’s February 29, 2020, peace accord with the Taliban.

The bounty stories certainly had that effect.  Congressional hawks in both parties immediately called for a delay in further withdrawals while the allegations were investigated.  They also made yet more “Trump is Putin’s puppet” assertions.  Nancy Pelosi could not resist hurling another smear with that theme. “With him, all roads lead to Putin,” Pelosi said. “I don't know what the Russians have on the president, politically, personally, or financially.”

Despite the growing cloud of uncertainty about the source or accuracy of the bounty allegation, several high-profile journalists treated it as though it was incontrovertible.  A typically blatant, hostile spin was evident in a New York Times article by Michael Crowley and Eric Schmitt.  The principal “evidence” that they cited for the intelligence report was the earlier story in their own newspaper.  An admission that there were divisions within the intelligence agencies about the report, the authors buried far down in their article.

High-level intelligence personnel giving the president verbal briefings did not deem the bounty report sufficiently credible, much less alarming, to bring it to his attention.  Former intelligence official Ray McGovern reached a blunt conclusion:  “As a preparer and briefer of The President’s Daily Brief to Presidents Ronald Reagan and George H. W. Bush, I can attest to the fact that—based on what has been revealed so far—the Russian bounty story falls far short of the PDB threshold.”

Barbara Boland, a national security correspondent for the American Conservative and a veteran journalist on intelligence issues, cited some “glaring problems” with the bounty charges.  One was that the Times’ anonymous source stated that the assessment was based “on interrogations of captured Afghan militants and criminals.”  Boland noted that John Kiriakou, a former analyst and case officer for the CIA who led the team that captured senior al-Qaeda figure Abu Zubaydah in 2002, termed reliance on coercive interrogations “a red flag.”  Kiriakou added, “When you capture a prisoner, and you’re interrogating him, the prisoner is going to tell you what he thinks you want to hear.”  Boland reminded readers that under interrogation Khalid Sheik Mohammed made at least 31 confessions, “many of which were completely false.”

A second problem Boland saw with the bounty story was identifying a rational purpose for such a Russian initiative since it was apparent to everyone that Trump was intent on pulling U.S. troops out. Moreover, she emphasized, only eight U.S. military personnel were killed during the first six months of 2020, and the New York Times story could not verify that even one fatality resulted from a bounty. If the program existed at all, then it was extraordinarily ineffective.

Nevertheless, most media accounts breathlessly repeated the charges as if they were proven. In the New York Times, David Sanger and Eric Schmitt asserted that, given the latest incident, “it doesn’t require a top-secret clearance and access to the government’s most classified information to see that the list of Russian aggressions in recent weeks rivals some of the worst days of the Cold War.” Ray McGovern responded to the Sanger-Schmitt article by impolitely reminding his readers about Sanger’s dreadful record during the lead-up to the Iraq War of uncritically repeating unverified leaks from intelligence sources and hyping the danger of Saddam Hussein’s alleged weapons of mass destruction.

Another prominent journalist who doubled down on the bounty allegations was the Washington Post’s Aaron Blake.  The headline of his July 1 article read “The only people dismissing the Russia bounties intel: the Taliban, Russia and Trump.” Apparently, the NSA’s willingness to go public with its doubts, as well as negative assessments of the allegations by several veteran former intelligence officials, did not seem to matter to Blake. As evidence of how “serious” the situation was (despite a perfunctory nod that the intelligence had not yet been confirmed), Blake quoted several of the usual hawks from the president’s own party.

As time passed, outnumbered media skeptics of the bounties story nevertheless lobbed increasingly vigorous criticisms of the allegations. Their case for skepticism was warranted.  It became clear that even the CIA and other agencies that embraced the charges of bounties ascribed only “medium confidence” to their conclusions. According to the Office of the Director of National Intelligence (DNI), there are three levels of confidence, “high,” “moderate,” and “low.” A “moderate” confidence level means “that the information is credibly sourced and plausible but not of sufficient quality or corroborated sufficiently to warrant a higher level of confidence.” The NSA (and apparently the Defense Intelligence Agency (DIA) and possibly other portions of the intelligence community) gave the reports the “low” confidence designation, meaning that “the information’s credibility and/or plausibility is questionable, or that the information is too fragmented or poorly corroborated to make solid analytic inferences, or that [there are] significant concerns or problems with the sources.”

Antiwar journalist Caitlin Johnstone offered an especially brutal indictment of the media’s performance regarding the latest installment of the “Russia is America’s mortal enemy” saga.  “All parties involved in spreading this malignant psyop are absolutely vile,” she wrote, “but a special disdain should be reserved for the media class who have been entrusted by the public with the essential task of creating an informed populace and holding power to account.  How much of an unprincipled whore do you have to be to call yourself a journalist and uncritically parrot the completely unsubstantiated assertions of spooks while protecting their anonymity?”

The media should not have ignored or blithely dismissed the bounty allegation, but far too many members ran enthusiastically with a story based on extremely thin evidence, questionable sourcing, and equally questionable logic. Once again, they seemed to believe the worst about Russia’s behavior and Trump’s reaction to it because they had long ago mentally programmed themselves to believe such horror stories without doubt or reservation.  The assessment by Alan MacLeod of Fairness and Accuracy in Reporting (FAIR) is devastatingly accurate. With regard to the bounty story, he concluded, “evidence-free claims from nameless spies became fact” in most media accounts.  Instead of sober, restrained inquiries from a skeptical, probing press, readers and viewers were treated to yet another installment of over-the-top anti-Russia diatribes. That treatment had the effect, whether intended or unintended, of promoting even more hawkish policies toward Moscow and undermining the already much-delayed withdrawal of U.S. troops from Afghanistan. It was a biased, unprofessional performance that should do nothing to restore the public’s confidence in the media’s already tattered credibility.