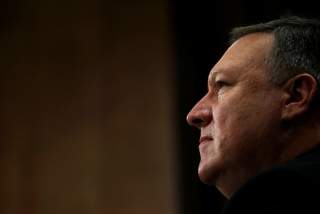 President Trump confirmed on Wednesday that director of CIA Mike Pompeo had traveled to North Korea and met with Kim Jong-un over Easter weekend. This marked the highest level of exchange between the United States and the Hermit Kingdom since Secretary of State Madeline Albright met with Kim Jong-il in 2000. While this meeting is a good sign for diplomacy, it also raises serious questions about Pompeo’s suitability for Secretary of State.

It’s reassuring that the Trump administration is undertaking serious preparations for the upcoming summit meeting between Trump and Kim Jong-un. Announcing a summit is relatively easy—making sure it goes well is much harder. The groundwork for this summit—including most importantly the substantive negotiations with North Korea on key areas of concern—is a monumental task. So far, the Trump team has been coy about what has been going on behind the scenes, leaving analysts to worry about what the State Department is doing with its reduced staff on a short timeframe. While Pompeo’s visit doesn’t completely allay fears, it is a sign that the Trump administration is taking this diplomatic process seriously.

However, Pompeo’s lack of candor about the meeting raises huge questions about his fitness to be Secretary of State. While it is understandable that he did not reveal the existence of his meeting during his public confirmation hearing, it is troubling that he does not appear to have discussed it behind closed doors with members of the Senate Foreign Relations Committee. Ranking Member Senator Menendez stated that Pompeo did not disclose the visit during their private meeting, and Committee Chairman Corker has also implied that he did not know about it. The fact that Pompeo withheld information about his involvement with North Korea during this process is an enormous red flag, especially since his views on North Korea are factors upon which the committee is evaluating his nomination.

This secretiveness reinforces the fundamental untrustworthiness of Pompeo that came out during his hearing. As a politician, Pompeo advocated for throwing out the Iran nuclear deal and promoted discriminatory policies against LGBTQ community + individuals. As CIA director, Pompeo has been accused of hampering diversity efforts at the CIA and suggested regime change as a reasonable outcome in North Korea.

As a nominee, Pompeo avoided given substantive answers on critical policy questions, played down his extreme views, and tried to present himself as a moderate that could represent America and its values around the world. As Senator Menendez said, “I’m trying to think about which is the Mike Pompeo I’m being asked to vote on?” How could the Senate vote in good faith for Pompeo when the only things they can be sure about are his deceptiveness and opacity?

That this trip to North Korea came during Pompeo’s confirmation process is also concerning. The president is free to pick whomever he wants to represent the United States in diplomatic meetings. If Pompeo were not the nominee for Secretary of State, it would be novel, but not necessarily out of line, for him to meet with Kim Jong-un as director of the CIA. However, when nominees are awaiting confirmation, they are supposed to avoid activities that give the appearance of them doing the job they have yet to be confirmed for.

Meeting with foreign heads of state as part of diplomatic processes is the Secretary of State’s job description. Negotiating diplomatic outcomes is not typically under the director of the CIA’s purview, and to avoid the appearance of impropriety, Pompeo should not be doing anything remotely resembling his potential responsibilities as Secretary of State.

So why did Pompeo keep this information secret from the Senate, and why is it now being made public? The sequence of events strongly suggests that the release of this information was a timed leak from inside the Trump administration to bolster Pompeo’s confirmation chances, which have been faltering the past few days as more senators have come out in opposition. By revealing this meeting, the administration is attempting to burnish Pompeo’s credentials as a diplomat and show that he needs to be confirmed quickly to carry the diplomacy with North Korea forward. There is a certain dark irony within all of this—the Trump team is saying that this diplomatic visit, which was inappropriate of Pompeo to go on in the first place, is proof that he is qualified for the job he is nominated for.

Ultimately, while it is good news to have evidence that the administration is taking diplomacy seriously, Pompeo’s actions surrounding the meeting raise serious questions about his fitness for Secretary of State. If President Trump is dead set on Pompeo leading diplomatic efforts with North Korea, then he should have Pompeo do so as director of the CIA, and choose a more suitable candidate to be Secretary of State.

Michael H Fuchs is a senior fellow at the Center for American Progress, and a former deputy assistant secretary of state for east Asian and Pacific affairs. Abby Bard is a research assistant of Asia policy for National Security and International Policy.