How Morocco Is Taking On Coronavirus 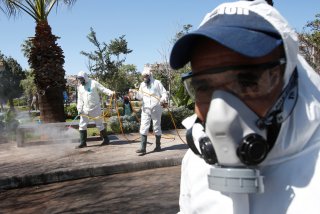 In every country where COVID-19 strikes, it has laid bare the gap in equality that also plagues our world. The vulnerable and the poor are succumbing in larger numbers and struggling to survive economically, while the healthy and the privileged bear an enormous moral responsibility to others. Here in Morocco, we are all facing an unprecedented test—similar in some ways to more powerful countries, yet also a bellwether for the developing world.

A video from a small city outside Marrakech, viewed on YouTube more than 2.5 million times, captures the difficulty of conditioning an underserved population to daunting health measures. A uniformed officer of the Interior Ministry, clutching a microphone, desperately exhorts the many passersby—too often mingling together—to go home and stay there. Speaking in a lower-class dialect of Moroccan Arabic seldom heard beyond those streets, she tries to explain why. The people she is addressing are part of the country’s vast “informal economy”—Moroccans who eke out a living by hustling for petty commerce and impromptu manual labor. For them, staying home means ruin.

This country of proud traditions, color, and light—lacking adequate healthcare or economic resources even in the best of times—could be hit harder by mass contagion by orders of magnitude than many Western states. King Mohammed VI understood this early enough to take aggressive measures to slow the virus’s spread. On March 13, he sealed off borders and made the difficult choice to suspend all flights to China, a major source of investment and trade. Three days later, all flights were suspended and mosques were closed. By March 20, the country was in lockdown, enforced by police and the army. Law enforcement has since arrested thousands for violating the new rules, even as it released thousands of other offenders to ward off contagion in the kingdom’s prisons.

To date, Morocco has 1,120 confirmed cases of the virus, 80 deaths, and the strikingly low rate of three cases per 100,000 people. But dramatically worse figures will likely emerge as a more aggressive testing regime falls into place; the government has ordered a substantial number of testing kits from China and South Korea. A local textile company has undertaken to produce masks at a rate of two million per day—both for healthcare works and for the population as a whole, now required by law to wear them in public. But whatever measures are taken, urban medical centers will almost certainly be overrun, while in outlying and rural areas the limited facilities make it difficult to meaningfully testing for, let alone treat, the disease.

I ponder this sad news from the comfort of my home in Casablanca, where my family and I are observing social distancing internally. “I want to hug you,” my son told me yesterday, “but I know I can’t.” As an employer of several hundred media workers, I have reorganized our broadcasting and print operations so that all can keep their jobs and most can work from home. Needless to say, we have radically revised our content as well. Our radio network, with especially large audiences beyond the big cities, works round-the-clock to inculcate a new way of relating to friends and neighbors. We are challenging intimate traditions of hand-holding and kissing, born of centuries.

To safeguard the economy of our oil-poor country, which was hard-pressed on the eve of the outbreak, will be a feat of creativity and unprecedented social solidarity. The king has already begun to condition those of us blessed with resources to do much more to support the most vulnerable in our population. The Moroccan version of a “surplus package”—a $3.2 billion emergency fund announced at the beginning of the month—is a government package but also a charity, to which the wealthy have been asked to contribute. It is reassuring to see that many are stepping up. But our economy’s larger structural problems have no easy answers, amid a global economy in which great powers are understandably focused on saving themselves.

I have been experiencing and mourning diverse facets of the problem in my own way. For decades my work entailed international travel every few weeks and brought far-flung friendships—in the United States, Europe, and elsewhere in Africa. Now grounded at home so suddenly and decisively, I learn of friends who have succumbed to the virus, including an American who passed away last week, and cannot be with their families to mourn or pray. These friendships congealed around the principle of social solidarity across borders. Now, many more people across the world feel intensely that we are all connected. At the same time, they are more focused on their immediate surroundings—their neighborhoods, their homelands—and strained to engage the broader world in any practical sense.

Moroccans have learned that to reach the horizon beyond the virus we must address the equality gap among ourselves. I pray that as we and other countries strive to do so, we will also work to heighten solidarity among nations. Both gaps must be addressed in order to repair the world.