How Much Does ISIS Really Threaten America? 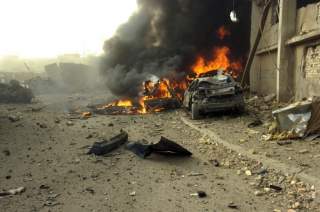 Secretary of Homeland Security Jeh Johnson made news recently by claiming that “without a doubt we have evolved to a new phase of the global terrorist threat.” His basic argument  was that ISIS and similar groups are “more decentralized, more complex, [and] more diffuse.”

While some concern is warranted, there is no need for alarm on the scale we are currently witnessing. The ISIS threat is overhyped, giving the group more power than it deserves while distracting from bigger threats. More to the point, there is no new phase of terrorism, just the same phase—but with a different ability to promote use of usual tactics.

Indeed, the threats facing the American homeland today, mostly of the “lone wolf” variety, are threats the United States has faced for years. What is needed now is a new way of dealing with an old problem.

In an era of increased connectivity, the ability of terrorists to contact lone-wolf candidates is greater than ever—and American leaders are worried. Terrorist organizations, like ISIS, have used the means of this hyper-connected era, especially social media, to great effect. A Brookings Institution study showed that ISIS has a “sophisticated and innovative methodology” that makes use of the “at least 46,000 ISIS-supporting Twitter accounts.” This social media strategy—and the appeal of ISIS’ cause—has attracted lone wolves to carry out strikes in the West, with the brutal attack in Paris so far being the most significant. The United States is worried sick about a potential terrorist-inspired lone wolf operation on its own soil and is scrambling to tighten security at military bases and malls alike.

In addition, ISIS’ mastery of social media and messaging inspired a cadre of foreign fighters and people sympathetic to its mission. Many fighters have gone to the battlefields in Iraq, Syria, and beyond in hopes of establishing an Islamic state. Nicholas Rasmussen, Director of the National Counterterrorism Center, called the rate of foreign fighters traveling to the area “unprecedented.”

The worry for Western governments is that these fighters will obtain advanced asymmetric warfare training and use them to great effect back in their home states. The thirty to forty Americans who have traveled to the Middle East—a dozen or so who may have joined ISIS—worry U.S. law enforcement because, upon their return, they pose a threat to homeland security.

These trends are certainly concerning, but they do not equate to a “new phase” of terrorism for the U.S. homeland. The reasons why are straightforward.

For one, ISIS’ main focus is consolidating gains and grabbing new territory in Syria and Iraq. What it has been able to do there certainly constitutes a new phase in the way terrorists operate, but does not radically change the danger calculus on American land. Indeed, ISIS is not yet fully focused on bringing chaos to the West. Yes, it wants to eventually destroy Western targets, but that is currently a lesser concern for ISIS. And, the lone wolf attacks the group does inspire will continue to be smaller and less catastrophic than has been seen in America’ recent past. Further, al-Qaeda—the bigger threat to the United States—is not at the capacity level at which it once was due to the United States. Its ability to pull off a spectacular attack like 9/11 is substantially reduced, although not impossible. So while the United States should still be vigilant for a large-scale attack, the country can breathe a little easier.

It is also important to note that what is happening now with ISIS and many other anti-Western terrorist groups is not necessarily a new phenomenon. While ISIS certainly has an amazing ability to inspire action via social media, the appeal of fighting for an ideological cause has been around since time immemorial. The Iraq and Afghanistan Wars in the 2000s, the Afghanistan War in the late 1970s and early 1980s, and even the Spanish Civil War of the 1930s are just some examples of when foreigners came running in order to help a cause for which they believed they should die. As for lone wolf or smaller-scale attacks in the United States, the country has dealt with these kinds of issues for a long time. Even today the United States experiences “one attack, on average, every thirty-four days.” In essence, the fear from returning foreign fighters should not scare us any more than current domestic terrorists do because they are already here and acting. To claim that ISIS is currently more dangerous to American targets seems off, although a lack of a coherent policy to stem the group could change that calculus.

So how can policymakers address the problem? First, law enforcement must find better ways of stopping lone wolf attacks. These forces understandably tend to focus on bigger plots with more than one actor—and this should continue. But technology will also help monitor these possible attackers.

Next, most intelligence forces should focus less on the motivations of jihadist groups—which are generally understood—and should instead track the most likely foreign fighter returnees. Finally, on a grander scale, the United States should stop exaggerating the danger posed by ISIS and groups like it. Renown and fear fuel their notoriety and swell their ranks with new fighters. And despite the hype, ISIS is a marginal, but not strategic threat to the United States, especially when it grapples with other major threats like a revanchist Russia (which still has 2,000 tactical nuclear warheads) and a rising China (that just released a more global-looking military strategy).

This is not to say that lone wolves and the terror threat sprouted by ISIS are not dangerous. More importantly, this is not to say that ISIS is not a menace in its region of operations—it is one of the most heinous and brutal organizations the world has seen. And, what it has accomplished in Iraq and Syria is certainly historic. But when it comes to the homeland, we are still relatively safe from a massive attack, even though vigilance is still greatly required. While we could be surprised and shocked, chances are the greater dangers to our nation lie elsewhere. This “new phase,” should it exist, has yet to reach our shores.

Alex Ward is Assistant Director of the Brent Scowcroft Center on International Security at the Atlantic Council where he works on U.S. defense policy, strategy and military affairs. You can follow him on Twitter at @AlexWardB.