How Much Leverage Does Russia Really Have over Germany? 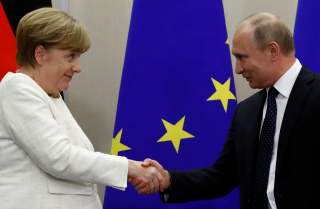 Right before the Helsinki meeting with Putin, Trump claimed Germany is “totally controlled” by Russia, citing the extensive oil and gas trade between the two countries. He took issue with Germany giving “billions of dollars to Russia” and that “now we have to defend them against Russia!”

While many prominent politicians—including the Republican speaker of the House Paul Ryan—condemned the tone of Trump’s remarks, none of them challenged his central assertions: that Germany is politically dependent on Russia because of its energy imports; and that this dependency explains Germany’s meager NATO contributions.

Indeed, Ryan used the opportunity to double down and stress his opposition to Nord Stream 2, a new pipeline project connecting Russia and Germany. This view is also prevalent with Democrats. Indeed, opposing Nord Stream 2 was staple policy under Obama.

This narrative of Russo-German collusion resonates with some EU members as well. For example, when the first Nord Stream pipeline system was in the making, the then Polish defense minister Radek Sikorski called it a new “Molotov-Ribbentrop” pact, citing the infamous treaty by which Nazi Germany and Stalinist Russia prepared their joined annexation and destruction of Poland in 1939.

But this view is wrongheaded. The energy trade does not give Russia any significant leverage over Germany’s political decisions. If the United States does not get this fact right, it will be much harder to maintain what is left of the transatlantic alliance, deal with Russia and manage trade relations with the European Union.

Russia could not coerce Germany by imposing an oil embargo. Germany could replace Russian supplies with relative ease, as oil is nowadays largely sold at a liquid global market that dictates prices.

As for natural gas, Russia has indeed used its pipeline structure to coerce its post-Soviet neighbors into compliance. Most prominently, Russia cut off gas supplies to Ukraine in 2009, causing Ukraine severe economic problems, entrapping it in predatory supply contracts and extracting major concessions on Russian troop deployments in Sevastopol and Ukraine’s NATO policy.

But Russia could not use gas as a political weapon against Germany. This is for four basic reasons.

First, the share of Russian imports in Germany’s overall energy portfolio is small. Germany buys about 40 percent of its gas from Russia. Notably, the shares of Poland and the Baltic states far exceed that of Germany, and neither of these countries takes a particularly friendly stance towards Russia. Furthermore, gas makes up only about a quarter of German energy. In other words, a mere 10 percent of Germany’s energy consists of Russian gas.

Second, to use gas for political leverage, Russia would have to cut off supplies to all EU member states, not just to Germany. This is because Brussels has taken substantial steps to unify Europe’s energy market. These measures, specifically designed to guard against Russian energy manipulations, prevent Russian entities from discriminating between European buyers.

The EU also continues to improve energy-related infrastructure within the EU—measures that allow member states to share energy in case of sudden shocks to external supplies.

Divide-and-rule is simply not an option. Berlin is well aware of this—and so is Moscow. Asked about Trump’s assertion that Russia controls Germany via energy, Maxim Bratersky, an International Relations Professor at Moscow’s Higher School of Economics, one of the leading research institutions in the country, simply responded with a dry “of course not.”

Third, cutting off gas would hurt Russia much more than Germany. Gas sales to Europe, which make up about three quarters of Russia’s overall gas exports, are the economic foundation of the country. The distribution of spoils from the gas trade maintain the peace within Russia’s elite. Gas revenues allow for generous social spending to keep the population largely docile; they fund state media, the security apparatus and Russia’s formidable military forces.

A source with deep knowledge of the Russian and European energy market confided that Russia—due to brute facts of geography and infrastructure—depends on European purchases, grandiose announcements from the Kremlin about megadeals with China notwithstanding. This will not change in the foreseeable future.

Lastly, and probably most importantly, Germany’s actions speak loudest against Trump’s assertion of Russian power. Germany, despite Russia being one of its largest trading partners, was the main driver behind the formation of EU sanctions when Russia annexed Crimea in 2014 and aided and abetted separatists in Ukraine.

Germany was willing to pay a steep price for sending a strong signal to Russia. Russo-German trade declined by almost a quarter in the same year. Ever since then, these sanctions have been renewed again and again, with Berlin being a major force in bringing together the necessary political consensus. It was not Merkel, but Trump who publicly wondered why there was any need to quarrel with Russia.

Germany’s defense and NATO policy is not controlled by Russia. Indeed, Germany is one of the main contributors to NATO’s Enhanced Forward Presence operation in Poland and the Baltics. This operation has just been cited by Putin as “destabilizing.”

If not for Russian control, why is German military spending so low? Many have cited the country’s understandable tradition of preferring economic and diplomatic means over war. Germany’s wealth allows it to employ these peaceful measures with great success.

There is also an unspoken awareness among Europeans that pre-existing conflicts of interests between Germany and other EU member states—Greek debt, Polish governance, Baltic stances on energy pipelines, border security, refugee management, etc.—would be greatly exacerbated if a strengthened and emboldened Germany were to link them to security assurances.

But there is more: Germany simply does not fear Russia. It only did so when Moscow commanded the resources of a superpower, with the majority of the Soviet Army’s powerful fighting forces located right around Berlin and at the West German border.

Now Moscow’s forces are remote, with bodies of water and other countries blocking the way. At the same time, Russia is engaged in costly operations in Ukraine and Syria, and its defense spending barely rises above that of Germany, let alone France and Britain.

Germany does not need American protection against Russian aggression. Accordingly, German foreign minister Heiko Maas, in response to Trump’s words, stated bluntly that “we are not prisoners, neither of Russia, nor of the United States.”

The German people agree. In a recent YouGov poll, Germans stated they saw Trump as a larger threat to world peace than Putin—by a margin of almost 50 percent.

Germany, together with Russia, opposed the United States over Iraq in 2003. But Germany also opposed Russia’s aggression against Ukraine and sided with the United States in 2014. In both cases, Berlin weighed its options and acted according to what it saw as its own best interest. The same applies to Germany’s energy policy. No realist should be surprised.

Jonas J. Driedger is a German policy analyst at the European University Institute in Florence, Italy. He is currently based in Moscow and partakes in the Alfa Fellowship Program. He specializes in foreign and security policy with a focus on Germany, the European Union and Russia. His analyses were published in Politico Europe, per Concordiam, EUObserver, and EurActiv.