How the National Security Council Transformed The American Way of War 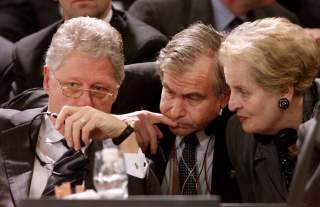 FOR ALL its fascinating anecdotes, deep archival research and the author’s impressive access to the elite ranks of the national security establishment, John Gans’ White House Warriors: How the National Security Council Transformed the American Way of War disappoints. For one thing, its thesis is elusive. There is some discussion, here and there, of the importance of the White House national security advisor being an “honest broker” when interagency disputes roil the Executive Branch; here, as in all related studies, Brent Scowcroft (1975–77, 1989–93) is upheld as the “gold standard” for the job. Yet Gans ultimately scoffs at the idea that National Security Council (NSC) chiefs should reduce themselves to “opinion-less eunuchs” and concedes that “honest brokering … was never as easy in practice as it was in the prose of scholars.”

Then there is Gans’ assertion that “the NSC has exerted more influence over presidential decisions than any single institution or individual over the last seventy years.” If physical proximity to the chief executive is synonymous with influence, an article of faith inside the Beltway, then Gans may be right; theoretically, NSC staffers control the flow of ideas and decisionmaking vehicles—policy studies, memoranda, implementation orders—in and out of the Oval Office.

But the purview of NSC is limited, by definition, to national security matters. Surely the presidency encompasses a broader range of decisionmaking than that; it is far from true that every consequential presidential decision relates to national security. Loudly declaring “read my lips: no new taxes” was a decision that George H.W. Bush made, and by many accounts, the one that contributed decisively to his fall from power.

We are also obligated to recognize categories of presidential decisionmaking that extend beyond policy considerations altogether: choices rooted instead in everything from capitulation to human frailty, often unconscious, to elaborate calculations of what will play in Iowa. For these kinds of presidential decisions, should we accept Gans’ accordance of primacy to the NSC? Does he count the news media as an institution? It was not, after all, the influence of NSC staff that Lyndon Johnson bowed to when, recognizing the country no longer supported his Vietnam policy, the thirty-sixth president lamented: “If I’ve lost Cronkite, I’ve lost Middle America.”

GANS’ SUSCEPTIBILITY to challenge in this ultimately irresoluble and somewhat senseless debate—which individual or institution has exerted the greatest influence over presidential decisionmaking since World War II—is not even central to a fair critique of his book.

The problem, rather, is the absence of a vision of a subject that would elevate White House Warriors to something more than a disjointed series of well-rendered anecdotes and profiles. After spending some two hundred pages heralding the creative interventionism of noble NSC staffers and arguing that the growth in the council’s size was simply “a target of convenience … for those in Washington who wanted to complain about the staff’s influence on policy,” Gans concludes with the abrupt judgment that the NSC has grown “too big to be thoroughly managed or effective,” and that its proximity to the president has left the conduct of war “less patient for progress” and “far less informed by the perspective of the military.”

Despite the author’s toil on the project—originally as a dissertation, since at least 2013—the text has a somewhat rushed feel. A former Pentagon speechwriter now at Perry World House, a think tank at the University of Pennsylvania, Gans strives for a certain solemnity of tone but too often gives us a book that reads like an expanded magazine article. Sometimes this People-like haste produces mere clumsiness: “The ‘November Ultimatum,’ as it became known, reflected the introverted but not un-self-aware Nixon’s appreciation for his own reputation as a hawk on defense and a hardliner on Communism.” At other times, spanning the Nixon years to the Trump era, the result is more than non-musical—a mad flight from grammar:

The national security advisor’s control of access to the president and commitment to secrecy made staff influence even more difficult because so few really knew everything that was going on, which made it difficult for staffers to advocate forcefully and easy for Kissinger to dismiss those with only partial awareness.

Yet the ultimate impact of the escalation, and what was required, like ending the draft, to keep the United States engaged in Vietnam for years, exhausted the American military, which endured internal misconduct, smaller budgets, and public scorn, for years to come.

For much of its first year, the administration was marked by turnover at the White House, including Flynn’s departure, and turbulence at the agencies where then-defense secretary Jim Mattis’s Pentagon was understaffed, and the State Department, due in part to a heavy-handed reorganization launched by then-secretary of state Rex Tillerson, was in crisis despite the arrival of Secretary of State Michael Pompeo.

The bad decisionmaking on display in the construction of such sentences causes greater harm than aesthetic offense or narrative disruption; it undermines faith in the author’s substantive grip on his subject. Anyone so hurried and undisciplined in his framing of the relevant characters and issues stirs suspicion as to whether he understands them at all.

A case in point: Gans focuses intensively on George W. Bush’s decision to launch a troop surge in Iraq at the beginning of 2007. Was it a success? Gans seems to think so, writing that, where ending the Iraqi insurgency was concerned, “The surge did just that.” Twelve pages later though, the author allows only that “the perceived success of the surge” imbued counterinsurgency doctrine in military circles with a new cachet.

There is an additional problem: repetition. One five-sentence stretch includes references to “what many expected to be,” “what was expected to be” and “what promised to be,” while a string of three sentences elsewhere brings us someone who “dedicated himself to a career in” X, then “dedicated his time at Yale” to Y before “dedicating his life to” Z. This, too, invites skepticism about the author’s analytic prowess.

GANS’ ANIMATING idea—to examine the evolution of the NSC’s wartime processes through portraits of individual NSC staff members involved in military deliberations—was an ingenious idea for a book. He develops this as well as anyone could. The footnotes cite many original interviews and previously unpublished documents, along with a heavy reliance on existing secondary literature, particularly Bob Woodward’s blockbuster canon and David Rothkopf’s pioneering Running the World: The Inside Story of the National Security Council.

The deficiencies of this approach are both innate and committed in execution. Gans himself acknowledges that the power of the NSC—rather than reflecting some authorial autonomy over the American way of war—has always depended, with a resetting of the rules on each Inauguration Day, on the personality and organizational preferences of its chief patron and customer: the president of the United States. Gans’ admission of this comes couched in tautology: “The NSC staff’s ability to fight for ideas has grown because the institution has been empowered over the last seventy years.”

Additionally, the selection of a given staff member as a window onto a given war—say, Michael Forrestal and the Vietnam War, or Meghan O’Sullivan and the Iraq War—inevitably leads the author to oversell the influence of that character. This peephole view onto the massive interagency disputes and ground-level killing that have marked nearly a century’s worth of U.S. military history reveals that that which may make for an ingenious idea for a book doesn’t always translate into a thorough treatment of a complex subject matter or even a rewarding literary experience.

For Gans’ approach to cohere we must find great tension in rather typical confrontations between NSC staffers and turf-protective cabinet officers, and in those instances when, either in response to this tension or on the direct orders of their bosses in the Oval Office, the so-called warriors on the NSC staff have “gone operational.” The definition of such activity is stretched beyond credulity to mean anything from the truly gonzo adventures of Oliver North in Iran-Contra to the innocuous accompaniment of NSC staffers on research trips to war zones; to wear Kevlar once is to “go operational.”

Gans’ own political bias further imbalances his judgments. “Obama clearly wanted a strong NSC to pursue his agenda,” the author writes approvingly, without noting that the same could be said for Richard Nixon, whose investment of near-total authority in the Kissinger NSC is cast here as the worst model in recent history.

Nor is this all. Surprising gaps in Gans’ bibliography include Power Wars: Inside Obama’s Post-9/11 Presidency, The New York Times reporter Charlie Savage’s monumental and authoritative study of the cumbersome approach to national security decisionmaking in the Obama administration; and The Dispensable Nation: American Foreign Policy in Retreat, by Vali Nasr, a State Department aide who became dean of The Johns Hopkins University’s School of Advanced International Studies. The first insider memoir of the Obama era, Nasr’s book included the damning judgment—addressed nowhere by Gans—that President Obama had a “truly disturbing habit of funneling major foreign policy decisions through a small cabal of relatively inexperienced White House advisors whose turf was strictly politics … His actions from start to finish were guided by politics.”