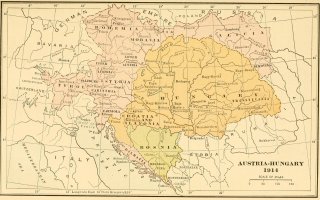 IF ONE had to come up with a single sentence to sum up all of the brutality, folly, tragedy, chaos, villainy, and occasional moments of heroism that John Connelly surveys in his superb study of the emergence of modern Eastern European nation-states, you could boil it all down to this: Too much history and not enough real estate.

Put another way, the defining borders of most of today’s relatively young Eastern European nations were drawn on very ancient, multi-layered soil. Tilling that soil since antiquity were permanent, deep-rooted peasant populations that remained isolated, illiterate, and bound in servitude for thousands of years. For the most part they were ruled, and sometimes owned, by feudal landowners—some of local origin, others part of repeated waves of outside conquerors incorporating them into empires. Some were short-lived, others long-lasting. In both cases, the native tillers of the earth knew little and cared less about their masters, as long as they were allowed to scrape out a bare subsistence.

To cite a single example, Dacia, which later became modern Romania, was once an outlying province of the Roman Empire. While the Roman presence was transient, it lasted long enough to make Romanian a Romance language and to prompt educated Romanians to declare themselves, to this day, “a Latin island in a sea of Slavs.” By late medieval times, German colonists, generally referred to as “Saxons,” were building cities and establishing commercial networks in regions like Transylvania that still left the vast majority of local peasantry untouched. Peasants and “Saxons” were ruled by a small but powerful land-owning class of native boyars and a new layer of Magyar nobility that dominated Transylvania as part of the late medieval Kingdom of Hungary. That kingdom, in its turn, was destroyed by the Ottoman Turks at the Battle of Mohács in 1526. On the fatal field of Mohács, once called the burial ground of the Hungarian nation, Sultan Suleiman the Magnificent wiped out much of Hungary’s nobility and clergy and, along the way, added another layer of conquerors to what would ultimately become modern Romania.

Yet another wave of conquest, this time emanating from Austria, would gradually drive back the Turks, acquiring Hungary as part of the Hapsburg dominium, ultimately extending control to Transylvania. Hapsburg dominance would last for two centuries, ending only in the ruins of World War I. The rest of what would become modern Romania—then called Wallachia and Moldavia—remained tributary to the Ottomans and was governed by wealthy, corrupt Greek “Phanariots” from Constantinople, who procured their posts through bribery into the first half of the nineteenth century.

While the Phanariot masters shared a religion (Eastern Orthodox Christianity) with their Romanian subjects, that was about all they had in common. The Phanariots were there to recover the costs of the bribes they paid to get their posts, squeezing as much additional revenue out of the locals as they could before their own replacement or execution by the Ottoman authorities.

When a thin layer of educated natives—and some members of the Phanariot ascendancy that had settled in and “went native”—launched the modern, “nationalist” cause for a Romanian nation state in the nineteenth century, the vast majority of the population was still mainly comprised of illiterate, impoverished, and oppressed peasants with no political power and almost no political awareness. The very concept of nationhood, or anything beyond a tribal identity and a sense of communal hierarchy ingrained by time, was an alien concept outside of a small circle of educated landowners, city dwellers, and an embryonic intelligentsia.

Similar conditions, with obvious local variations on the theme, applied in other soon-to-be Eastern European nation-states like Serbia and Bulgaria, and Slavic territories like Croatia, Slovenia, Slovakia, and, later, Bosnia, all of which became part of the Hapsburg domains (afterwards the Austro-Hungarian Empire) over time.

Finally, closer to the heart of Europe, culturally as well as geographically, there were countries like the kingdoms of Poland and Bohemia, which both had long histories as independent powers before being consumed by one or more of the three great European states that dominated modern Europe until World War I: Prussia (which morphed into Bismarck’s German Reich), Imperial Russia, and the Austro-Hungarian “Dual Monarchy.”

IN ALL of these Eastern European entities, whether they were former nations or not, tribal, ethnic, and religious identities ran deep. Yet there were always substantial minority populations differing in language, culture, religion and geographical origins—e.g., Turks, Jews, “Saxon” Germans, Gypsies, Greeks, and even Armenians—who resided side-by-side (but unassimilated) with the “locals” for generations, even centuries.

This on-the-ground reality was very much at odds with the idealistic visions of early nineteenth-century Pan-Slavic nationalists, like the poet Ján Kollár and the Croatian theologian Ljudevit Gaj, who,

had become aware that people from Croatia could understand people living in Serbia, Montenegro, and Macedonia. In fact, there was no border in language going from what we now call Slovenia all the way to the Black Sea. He [Ljudevit Gaj] concluded that the individuals living in this great space were one people, but they had to be awakened to their identity. That became his personal calling.

Gaj named his newly imagined “nationality” Illyrians, later to be known as Yugoslavs. Kollár envisioned a similar linguistic “nationhood” shared by Slavic speakers in parts of Germany, Slovakia, and Bohemia. He and his followers called them “Czecho-Slavs,” from which the concept of Czechoslovakia would arise. Gaj and Kollár became friends when they both resided in the old city of Pest, across the river from Buda in Hungary. Referring to Benedict Anderson’s influential 1991 work, Imagined Communities: Reflections on the Origin and Spread of Nationalism, Connelly strikes a rather poignant note:

An influential book [Anderson’s] tells us that nations are imagined communities. Here we have two men who liked to discuss deep questions on paths in the hills above the Danube in the 1830s, who imagined two nations that politicians in Paris, including Woodrow Wilson, brought to life as states in 1919. We also know that neither state survived the twentieth century. Humans imagine nations, but not all the nations that they imagine have the coherence to stay together. Like unstable chemical compounds, some come apart; occasionally they explode.

This brings us back to the problem of too much history and not enough real estate. While Yugoslavia and Czechoslovakia were both linguistically homogeneous, their linguistic sameness was countered by deep cultural, historical, economic, and sometimes religious differences. Unfortunately, the statesmen and officials responsible for redrawing the map of Europe after World War I were blind to this reality:

The East European states fashioned in Paris after World War I had problems that Wilson, a political scientist from Virginia, understood poorly. He and the peacemakers intended Czechoslovakia and Yugoslavia to be national states ... but they ended up becoming miniature Habsburg empires, with numerous peoples within their boundaries. Before he arrived in France in December 1918, Wilson imagined that the “peoples” of Austria-Hungary might be easily separated. But by the time he left, he despaired of the new peoples visiting him “every day,” demanding the very same real estate.

In the case of Czechoslovakia, a common language was just about all the two component groups shared. The Czechs had been part of the western, “Austrian” half of the Austro-Hungarian Empire—an industrial and economic powerhouse with a strong middle class, a skilled labor force, and a rich intellectual and cultural life driven by Prague as well as Vienna. Slovakia was part of the Hungarian half of the Empire—economically backward, with a poor, rural majority of peasants living in near feudal conditions, governed by Magyar chauvinists whose determined efforts to forcefully replace the Slovakian mother tongue with the Hungarian language were even more heavy-handed than the Austrian efforts to impose the German language on the Czechs. And although Czechs and Slovaks were both Slavic peoples within the Austro-Hungarian Empire, they occupied, as it were, separate wings of the same building, run by different ruling classes and formed into different social institutions.

IF CZECHOSLOVAKIA suffered from a split personality, Yugoslavia was plagued by multiple personalities. Although almost all of the freshly-minted Yugoslavs spoke essentially the same mother tongue and shared many of the same chromosomes, their histories could not have been more clashing. Because Serbia sided with the winning Allies while Croatia and Slovenia had fought on the side of the Central Powers as part of the Austro-Hungarian Empire, the new Kingdom of Yugoslavia was, from the start, not so much a country as a Greater Serbian Empire.

It was ruled by the reigning Serbian dynasty, the Karageorgeviches, from their capital in Belgrade, with Serbs dominating the bureaucracy, military, and security establishments. This Serbian dominance was all the more galling since, while Serbia was a pitiable agricultural state—a nation of pig farmers in the eyes of many of their newly-conscripted fellow citizens—and had been ruled by the decaying Ottoman Empire, both Croatia and Slovenia, from the beginning of the eighteenth century onward, had been part of a major, westward-looking European power, albeit on its rather backward fringe. Croats and Slovenes were also Catholic and religiously westward-looking whereas the Serbs were Eastern Orthodox. In addition, ever since the latter half of the eighteenth-century, Slovenians and Croatians had belonged to a sophisticated, modern administrative state that was relatively free of corruption and governed by an established body of laws and authorities. They were also part of a large economic and cultural enterprise, radiating out from Vienna, that offered educational, artistic, and career opportunities on a vast scale, even to its non-Austrian, non-Magyar “subject” races. All this came to a swift terminus with the death of the Dual Monarchy and the division of spoils at the Paris peace negotiations.