How NATO Could Solve the Suwalki Gap Challenge 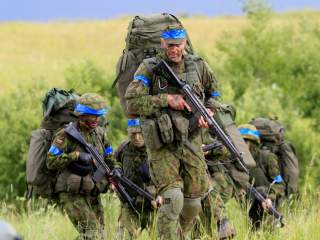 Sebastien Roblin recently wrote a good summary of the increasingly popular narrative on the Suwalki Gap and—unintentionally—an equally good representation of the glaring gaps in it. Roblin notes that the forty-mile (more common measurement is sixty miles) corridor squeezed between Kaliningrad Oblast of Russia and Belarus represents a “natural chokepoint Russia could potentially assail from multiple directions to pinch off columns of NATO troops attempting to reinforce the Baltics.” Russia’s ability to prevent reinforcements from arriving is expected to enable its forces to occupy the Baltic states in thirty-six to sixty hours, according to a RAND Corporation study. Referring to the 2018 CEPA study authored by retired Lt. Gen. Ben Hodges, Roblin reiterates the solution to the conundrum: reinforce conventional deterrence by enhancing NATO military presence in the Baltic states and the ability to quickly amass troops on the Polish side of the corridor to keep it open.

The scenario sounds scary—and is intended to be scary—but leaves several important aspects of the dilemma without proper discussion. One aspect is the actual status of the Suwalki Gap and the other is the solutions, which could actually work. A closer look at these omissions casts the problem in a very different light.

For fairness, analysis of the situation should proceed from the same premises as all studies of the Suwalki dilemma—the worst-case scenario of Russia seeking to occupy the Baltic states.  It should leave aside the bigger question of whether Russia would want to occupy the Baltic states (in case of war, Poland is a vastly more attractive target) or can reasonably hope that it could do so without triggering war with the entire NATO. That premise should be kept in mind because inclusion of in-depth analysis of Russian intentions could change the picture in quite dramatic ways.

A closer look at the situation on the ground should reveal, first and foremost, that Russia does not need to close the Suwalki Gap because it is already closed. Roblin is, in fact, one of few authors writing about Suwalki who mentions—at least in passing—the artillery and short-range missiles (he should have also mentioned aircraft) deployed within easy reach of the corridor. Terrain is difficult and there are only two roads that allow fast reinforcement. The bottom line—Russia does not have to send tanks, as everyone fears, to prevent NATO reinforcements: it can use artillery or other strike assets to destroy the roads and keep the them closed for a fairly extended period of time. If the RAND corporation estimate (thirty-six to sixty hours) is to be believed, then these reinforcements should arrive hours sooner, perhaps in twenty-four hours or so. If one imagines a more efficient Russian offensive, then they should be in place twelve to eighteen hours after commencement of hostilities.

There are four possible solutions to the Suwalki dilemma, all of which are absent from the ongoing discourse—probably because they are too controversial or too uncomfortable for public discussion. Yet, no policy debate can be sufficiently comprehensive without facing the entire range of options, no matter how unpleasant they might be.

The first option is learning to live with it. This is called mutual vulnerability. Back in the 1960s Americans more or less learned to live with the fact that Soviet missiles could reach any corner of U.S. territory; there have been several attempts to change that, but so far none of them have succeeded. The vulnerability of the Baltic states is balanced by the vulnerability of the Kaliningrad oblast—an isolated exclave of Russian territory, which, no matter how heavily armed, could be overtaken by NATO in case of war. In fact, the continuing discourse in NATO about Suwalki closely mirrors past Russian discourse about Kaliningrad (this concern has largely disappeared from public narrative early this decade, but similarity is glaring).

Mutual vulnerability is politically and psychologically uncomfortable, but, as the Cold War and even the post–Cold War period have demonstrated, better than war. Moreover, it can be sustained for extended periods of time and, if coupled with arms control and confidence building measures, can be quite stable.

The second option is enhanced NATO presence in the vicinity of the gap. It would take deployment of relatively large and mobile NATO force in the immediate vicinity of the Suwalki Gap capable of silencing Russian artillery, intercepting short-range missiles, shooting down aircraft, and entering the corridor with heavy armor to protect both sides of it enabling reinforcements to arrive to Baltic states. The force has to be near the battlefield because we are talking very tight timelines. One glaring drawback of the CEPA study referenced above is that no matter how smooth transportation of reinforcements through Europe might be, they will still be late as explained above (that is, they lose purpose if they cannot reach their destination in twelve to twenty-four hours).

Obviously, this option risks creating a security dilemma. Maximum security for the Suwalki Gap will unavoidably mean maximum insecurity for Kaliningrad Oblast. This will lead Russia to further strengthen its forces in the exclave and beyond triggering renewed concerns about Suwalki and additional reinforcements, etc. The end result is a spiral of a regional arms race until the growing tension snaps and explodes in a direct NATO-Russia military conflict.

The inherent risks notwithstanding, massive increase of NATO presence in the vicinity of the Suwalki Gap should remain part of the menu of options: sometimes policy leaders need to make difficult and dangerous choices if nothing better is available. It is vital, however, to clearly understand implications of each choice.

The third option is regime change in Belarus. A “Belorussian Spring” or a “Minsk Maidan” could help break the alliance with Russia and secure the corridor on one side. Under the best of circumstances, the Suwalki dilemma will disappear altogether if additional reinforcement routes open the gap. The obvious drawback of that option is timing—no one knows when and whether such a change may take place and if it does, which policy the new government might choose and what the Russian reaction might be.

The fourth and final option is to quickly take out Kaliningrad in case of conflict. The Suwalki corridor can be secured on very short notice—literally within the first hours of conflict—if the Russian forces deployed in the exclave are incapacitated. In that case, there would emerge a realistic chance of moving reinforcements through. If that option is combined with the previous one (regime change in Belarus), then we arrive at a perfect solution for the dilemma.

An obvious challenge for successful implementation of the fourth option is the sheer size of the Russian force and the need to reliably destroy a large number of targets in a very short time. In this case, same as in the second option, tight timelines will remain a major factor constraining the range of scenarios available to NATO planners. It remains for military professionals to determine whether the mission is achievable with conventional assets alone. Limited nuclear strike could do the job, but adverse effects on at least two NATO allies (Poland and Lithuania) makes this a questionable instrument.

Ability to implement a massive strike at Kaliningrad Oblast has one advantage over the second option (large-scale deployment in the vicinity of the corridor): relevant assets can be deployed far from the theater and thus allow avoiding excessive tension in one spot. One question that remains is whether the conventional strike assets immediately available to NATO will be sufficient for that mission: the strike has to be both instant (in a single sortie/launch) and comprehensive while sufficient capability should remain available for possible other missions not related to Suwalki. At the same time, one should keep in mind that significant increase in NATO conventional strike capability could trigger a Russian response and create the same security dilemma as described with regard to the second option, but on a Europe-wide scale.

Thus, a close look at the Suwalki dilemma leads to three conclusions, all of them uncomfortable.

First, the commonly discussed recommendations (such as those in the CEPA report, whose author’s name makes them particularly significant) do not meet the timelines criteria. They are relevant for the overall strengthening of NATO posture, but not for resolving this particular challenge.

Second, options that involve proactive approach by NATO involve increased tensions and arms races. These consequences can be tolerable, but not desirable.

Third, the only option that does not involve an arms race and increased tension—learning to live with mutual vulnerability—runs against the predominant mood in NATO and in the countries immediately involved in the Suwalki dilemma, Poland and the Baltic states. Yet, this is the only option (especially if coupled with confidence-building measures and negotiations to reduce concentration of forces) that holds any hope of avoiding conflict.